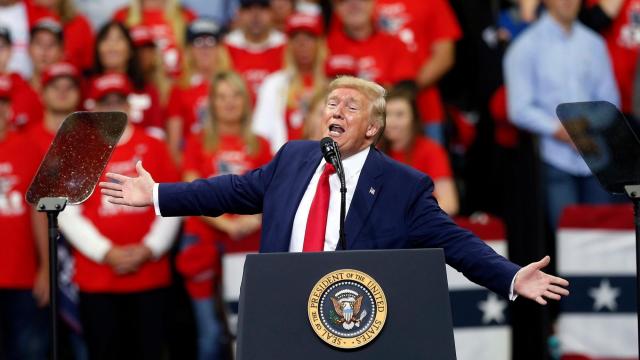 CNN — President Donald Trump on Friday questioned why the US government is protecting the whistleblower whose complaint sparked House Democrats' impeachment inquiry.

"Why are we protecting a person that tells things that weren't true?" Trump said, even though many of the whistleblower's allegations have been corroborated by other evidence, including the transcript of the President's call with Ukraine.

Trump's comment came as he once again claimed exoneration in his dealings with Ukraine, saying that he had done nothing wrong in pressing Ukraine's President to investigate former Vice President Joe Biden and his son Hunter. There has been no evidence of wrongdoing by either Joe or Hunter Biden in Ukraine.

The President has previously said he wants to know the whistleblower's identity and has sought to discredit the anonymous individual as a partisan actor who misconstrued the details of his call with the Ukrainian leader, even as information released by the White House confirmed those details. Intelligence community whistleblowers have fewer protections than other federal employees, but are nonetheless legally protected, and Trump's acting director of national intelligence has said the whistleblower followed the correct protocol for reporting complaints.

Trump was speaking in Louisiana on the eve of a gubernatorial election, where he hoped to boost two Republican candidates. However, the President once again used the rally -- his second in two nights -- as a perch from which to fight back against the impeachment inquiry, which he called "unconstitutional."

Trump told the crowd that House Speaker Nancy Pelosi, who had announced the inquiry less than three weeks ago as the whistleblower's allegations were beginning to consume Washington, "hates the country."

"I used to think she loved the country. She hates the country," Trump said. "Nancy Pelosi hates the United States of America, because she wouldn't be doing this."

Arriving here on the eve of the gubernatorial election, Trump was joined by not one but two Republican candidates vying for the governor's seat -- but he won't endorse one over the other. Trump spent some time trashing Gov. John Bel Edwards, a Democrat, and encouraged his supporters to vote for either Republican in a bid to keep Edwards below the 50% threshold required to avoid a runoff election. Both Republican candidates -- businessman Eddie Rispone and Rep. Ralph Abraham -- joined Trump onstage during the rally.

Edwards had earlier called Trump's attacks on him "boilerplate language" and expressed confidence that he will win outright on Saturday -- and if not, in a runoff.

"Quite frankly, I don't know of a single policy difference with respect to the Second Amendment between myself and the President. That's an indication that he just doesn't know me," Edwards said during a news conference Friday afternoon. "And I suspect he doesn't really know the state of Louisiana."

The rally was the latest in a series of last-ditch efforts by the President to boost turnout for Republican candidates facing tight races by tapping into his loyal base of supporters. Republican strategists expressed confidence that they can retake the governor's mansion so long as Edwards faces either of the two Republican candidates in a runoff.

Edwards has been polling close to that 50% threshold, but Trump campaign officials believe Trump can help boost turnout among Republicans enough to keep Edwards from winning outright in the state's unique jungle primary system.

The Louisiana rally came a day after Trump rallied supporters in Minneapolis where he took the stage at a political rally for the first time since Democrats launched their impeachment inquiry. That rally revealed a fired up Trump focused on attacking Democrats over their moves toward impeachment, savaging his would-be rival former Vice President Joe Biden -- including by making false or unsubstantiated claims -- and insisted once again that he did nothing improper in pressing the Ukrainian president to investigate Biden.