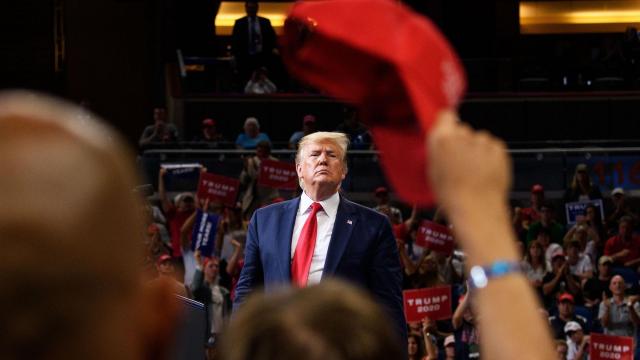 CNN — President Donald Trump used his rally in Minneapolis Thursday night to hit on several of his key issues through a Minnesota frame -- zeroing-in on the state's Somali population to tout his administration's restrictions on immigration and what he called his "travel ban," as well as criticizing Democratic policies by railing against a favorite target of his, Minnesota Democratic Rep. Ilhan Omar.

During the rally, Trump specifically challenged the case for allowing Somali refugees to settle in the North Star State.

"For many years, leaders in Washington brought large numbers of refugees to your state from Somalia without considering the impact on schools and communities and taxpayers. I promised you that as president I would give local communities a greater say in refugee policy and put in place enhanced vetting and responsible immigration control. And I've done that," Trump said, touting what he called his "travel ban," which specifically targeted Muslim-majority countries. The ban includes Somalia.

In the first few months of his administration, Trump asked then-acting Homeland Security Secretary Elaine Duke why he could not ban refugees from "f*****g Somalia" in a bout of rage at his Bedminster golf club.

The episode was detailed in the book titled "Border Wars," by The New York Times' Julie Hirschfeld Davis and Michael D. Shear.

He also boasted a reduction of refugee settlement in the US by 85% since taking office and also cited an executive action that "no refugees will be settled in any city or state without the express consent" of state and local governments.

"You should be able to decide what is best for your cities and your own neighborhoods," Trump said, warning that "If Democrats were ever to seize power, they would open the floodgates to unvetted, uncontrolled migration."

"We are keeping terrorists, criminals, and extremists the hell out of our country," he added.

The President also attacked Omar, a Somali immigrant who represents the district where the rally took place, as a "disgrace" and predicted she would propel him to victory in 2020.

Trump came close to winning Minnesota in 2016, losing to Hillary Clinton by about 44,000 votes.

The President used some of his time onstage to rail against Democrats and reassert his support for law enforcement. He also responded to the latest news in the impeachment inquiry, taking aim at the Bidens and insisting that he has done nothing wrong.

Trump also made several false claims on a variety of topics from Syria to health care during his 101-minute rally.

"This is nothing but a partisan witch hunt, sabotage," he added.

Democrats, he said, "know they can't win the 2020 election so they're pursuing the insane impeachment witch hunt. I've been going through it now for more times than I've been in office."

Trump's attack on Biden and his son got personal at times.

Trump told reporters ahead of his departure to Minneapolis that he believes he can win Minnesota in the upcoming election.

"I think we can win. It's been a long time since a Republican won. We have a 20,000-seat auditorium, you know, it's essentially Madison Square Garden ... over 80,000 people requested tickets," Trump said.

Trump and his campaign have preempted the visit with battles with local government officials and the city's police department.

Earlier this week, the Trump reelection campaign threatened to sue the Target Center in Minneapolis, where the rally is being held, over the arena's half-million-dollar plus bill, passed to them by the city. The venue threatened to withhold the use of the space if the campaign did not pay.

The Target Center eventually withdrew the request, which was originally intended to enhance security measures during the President's rally. The campaign announced Tuesday that Trump's appearance will go on as planned and the campaign will not be paying the bill.

The President and his campaign appeared to pin the bill dispute on Minneapolis mayor Jacob Frey, calling the bill an attempt to "extort" the campaign.

"The radical Mayor of Minneapolis, @Jacob_Frey, is abusing his power in an attempt to block the President's supporters from seeing him speak on Thursday. We refuse to be bullied by a left-winger resister & won't let him stifle the speech of @realDonaldTrump or his supporters!" Trump campaign manager Brad Parscale tweeted.

In another tweet, Parscale called Frey "a radical left-wing nutjob that is limiting free speech."

Frey has pressed the campaign to pay for the extra security, tweeting, "Someone tell the President of the United States that he can afford to help pay for the extra time our officers will be putting in while he's in town." He has also said that Trump is not welcomed in the city.

"While there is no legal mechanism to prevent the president from visiting, his message of hatred will never be welcome in Minneapolis," Frey said in a statement late last month.