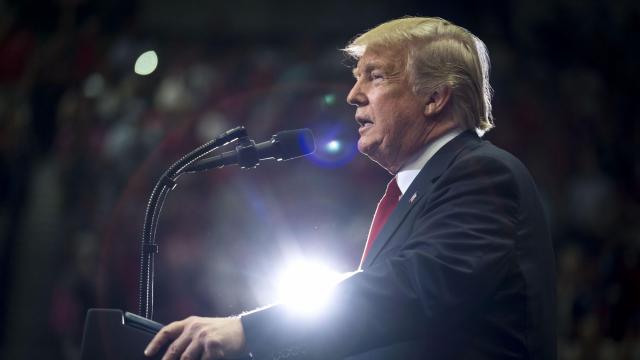 By Analysis by Stephen Collinson, CNN

(CNN) — In the most racially charged national political ad in 30 years, President Donald Trump and the Republican Party accuse Democrats of plotting to help Central American invaders overrun the nation with cop killers.

The new spot, tweeted by the President five days before the midterm elections, is the most extreme step yet in the most inflammatory closing argument of any campaign in recent memory.

The new Trump campaign ad was the latest example of the President's willingness to lie and fear-monger in order to tear at racial and societal divides; to embrace demagoguery to bolster his own political power and the cause of the Republican midterm campaign.

The ad -- produced for the Trump campaign -- features Luis Bracamontes, a Mexican man who had previously been deported but returned to the United States and was convicted in February in the slaying to two California deputies.

"I'm going to kill more cops soon," a grinning Bracamontes is shown saying in court as captions flash across the screen reading "Democrats let him into our country. Democrats let him stay."

The ad recalls the notorious "Willie Horton" campaign ad financed by supporters of the George H.W. Bush campaign in the 1988 presidential election. Horton was a man and convicted murderer who committed rape while furloughed under a program in Massachusetts where Democratic nominee Michael Dukakis was governor.

The ad has since come to be seen as one of the most racially problematic in modern political history since it played into white fear and African-American stereotypes. It was regarded at the time as devastating to the Dukakis campaign.

Trump's ad, while just as shocking as the Horton spot, carries added weight since, unlike its 1988 predecessor, it bears the official endorsement of the leader of the Republican Party -- Trump -- and is not an outside effort. Given that Trump distributed it from his Twitter account, It also comes with all the symbolic significance of the presidency itself.

In a first reaction, Democratic National Committee Chairman Tom Perez said the ad was a sign of desperation and suggested that Trump was losing the argument over health care that is at the center of the Democratic campaign.

"This is distracting, divisive Donald at his worst," Perez said on CNN's "Cuomo Prime Time."

"This is fear mongering. ... They have to fear monger and his dog whistle of all dog whistles is immigration. This has been Donald Trump's playbook for so long."

The Trump ad also flashes to footage of the migrant caravan of Central American asylum seekers that is currently in Mexico, which Trump says is preparing an invasion of the United States, implying that everyone in the column of people fleeing repression, poverty and economic blight is bent on murder and serious crime on US soil.

"Who else would Democrats let in?" a caption asks.

A source close to the White House told CNN's Jim Acosta that the web ad was produced by Jamestown Associates for the Trump campaign for the midterms and was designed to change fit into Trump's broader immigration push and to change the argument from "family unification to invasion."

"It's clearly working. We are all talking about it and not health care," the source said.

Trump has repeatedly warned that the caravan is laden with criminals or also includes Middle Eastern terrorists. He has offered no evidence for such claims, however, and even admitted last week there is no proof to support them.

The President has also often used racially suggestive rhetoric in his tweets and launched his presidential campaign in 2015 with a tirade against Mexicans. But he accuses the media, which points out his frequent falsehoods and flaming rhetoric, of being to blame for national divides.

Controversy over the new ad is certain to explode across the final days of the election in which polls suggest Democrats could take back the House of Representatives but Republicans could keep or even expand their Senate majority.

The new campaign ad was the culmination of a day on which the President staked out ever more extreme positions.

He took advantage of his role as commander-in-chief to promise to triple the number of troops to 15,000 that he has pledged to send to the southern border to repel the caravan -- which is still hundreds of miles away.

He also made a dubious claim of presidential power to reinforce his vow to change the Constitution on his own to end birthright citizenship that is guaranteed by the 14th Amendment.

Trump's combustible strategy is coinciding with an energetic final campaign swing featuring 11 rallies that opened in Florida on Wednesday night.

His increasingly inflammatory tactics are allowing him to refocus next Tuesday's election on his chosen issues, after a week of serial bombings and shootings that drowned out his closing argument.

Still, Democrats are increasingly confident five days out that they will take back the House, which they lost in the 2010 midterms.

"Up until today, I would have said, 'if the election were held today, we would win," former and possibly future speaker Nancy Pelosi said on "The Late Show" on CBS Tuesday.

One way of looking at Trump's increasingly frantic approach is that it is a sign of political weakness, because it seems to be a bid to drive up turnout in red state Senate races but might imply that tight House elections, that could be affected by such rhetoric, are out of reach.

However, everyone wrote Trump off in 2016, and it's possible his combative approach could defy pollsters again.

In another extraordinary development on Wednesday, the sitting President lashed out at the House speaker of his own party five days before an election, in a possible preview of a post-voting blame game.

Paul Ryan had had dismissed the President's birthright gambit, but Trump told him in a tweet to do more to save the House.

"This is a great way to screw up the message a week before the election," a senior GOP aide told CNN's Acosta.

"First the birthright comment itself and now attacking the top Republican in Congress who is trying to save our majority."

The President insisted he would not blame Ryan if Democrats won the House, though sounded less confident about Republican prospects in that chamber than in the Senate.

"I know we're doing well in the Senate and it looks like we're doing OK in the House. We're going to have to see," Trump told reporters.

Critics have accused Trump of abusing his power by sending troops to the southern border as part of a campaign stunt on a mission that has yet to be defined and he has implied will feature combat troops, but will in fact be made up of support forces.

But Defense Secretary James Mattis said Wednesday "we don't do stunts" and said the troops were being sent to offer "practical support" at the request of the Department of Homeland Security.

However, Democratic Rep. Jackie Speier of California accused Trump of squandering taxpayer funds in a desperate bid to buy votes, and predicted the American people would see through the plan.

Trump will Thursday press on with his pre-election blitz in Missouri, where he is trying to take out Democratic Sen. Claire McCaskill in the first of two rallies in the state in the next few days. Before Tuesday he will also visit West Virginia, Indiana twice, Montana, Florida again, Georgia, Tennessee and Ohio.

But two senior GOP sources told CNN's Jeff Zeleny that the President had been asked to steer clear of Arizona and Nevada amid concern he could hurt rather than help Republicans locked in tight Senate races.