Trump Says His Regulatory Rollback Already Is the ‘Most Far-Reaching’ 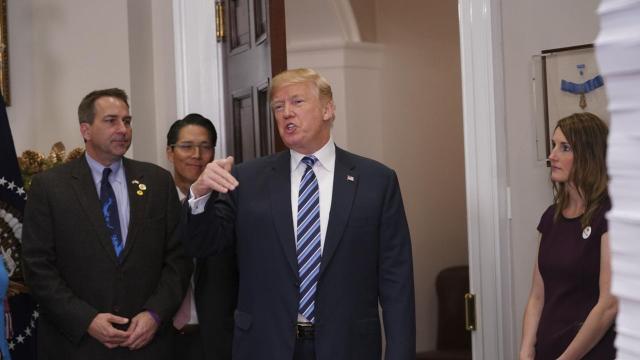 WASHINGTON — President Donald Trump said Thursday that his administration was answering “a call to action” by rolling back regulations on environmental protections, health care, financial services and other industries as he made a push to showcase his accomplishments near the end of his first year in office.

The remarks highlighted an area where Trump has perhaps done more to change the policies of his predecessor than any other, with regulatory shifts that have affected wide sections of the economy.

“We are just getting started,” Trump said, speaking from the Roosevelt Room of the White House. He described progress so far as the “most far-reaching regulatory reform” in U.S. history, a claim he did not back up.

“We have decades of excess regulation to remove,” he added. “To help launch the next phase of growth, prosperity and freedom, I am challenging my Cabinet to find and remove every single outdated, unlawful and excessive regulation currently on the books.”

Echoing his days as a real estate developer with the flair of a groundbreaking, Trump used an oversize pair of scissors to cut a ribbon his staff had set up in front of two piles of paper, representing government regulations in 1960 (20,000 pages, he said), and today — a pile that was about 6 feet tall (said to be 185,000 pages).

His efforts — his staff said that the rules already rolled back had saved $8.1 billion in regulatory costs over their lifetime, or a total of an estimated $570 million a year — have brought cheers from the business community, most notably from companies that will benefit from the rollbacks.

But these efforts have generated fierce pushback from state attorneys general and environmental groups who say that pulling back regulations has left the environment more vulnerable to pollution and consumers with fewer of the protections that were adopted after the financial crisis.

In no part of government have the consequences of Trump’s efforts to reverse the actions of the Obama administration been more apparent than in the Environmental Protection Agency. But the reach of the actions were pronounced even on Thursday, when the Federal Communications Commission voted to repeal Obama-era regulations known as net neutrality, which prohibit internet service providers from blocking or charging websites for higher-quality service.

“Americans expect safe products, safe food and a financial marketplace that is fair to them,” said Rachel Weintraub, the legislative director of the Consumer Federation of America, a nonprofit group. “Deregulation is undermining that.”

Still, several economic indicators — and comments from companies large and small — suggest that a shift in federal regulatory policy is building business confidence and accelerating economic growth, developments Trump certainly took credit for on Thursday. A survey of chief executives released this month by the Business Roundtable found that, for the first time in six years, executives did not cite regulation as the top cost pressure facing their companies.

“CEOs appear to be responding to the administration’s energetic focus on regulation,” Joshua Bolten, the roundtable’s president, said this month.

In total, the administration has so far formally revoked 67 rules, according to Neomi Rao, the head of the White House agency that oversees rule-making, while 635 planned regulations were withdrawn, 244 regulations that had been proposed were put on “inactive” status and 700 regulations were “delayed.”

But even some of Trump’s own staff members were not able to back up his broad claims Thursday, including Rao, who when asked if the regulatory rollback was the biggest in U.S. history, acknowledged that she could not prove that, and instead pointed to the Reagan administration as another time when a large number of rules were revoked.

And the $570 million in annual savings achieved so far, while a large-sounding number, can be compared to the $46 billion that the Department of Defense alone has paid to Lockheed Martin in contracts in the past fiscal year.

Even so, Democratic state attorneys general, environmental groups and others have already filed dozens of lawsuits to try to stop or reverse the Trump administration rollbacks, meaning that the ultimate outcome may be decided in federal courts.

“It is a mirage more than a miracle,” Xavier Becerra, the California attorney general, said in an interview Thursday, referring to the benefits to American society that Trump said have been gained.

Becerra alone has filed at least seven lawsuits challenging these regulatory actions, including one filed Thursday that claimed that the Department of Education is illegally delaying an Obama-era regulation that allows for loan forgiveness for students if they were defrauded or misled by their college.

The most permanent part of the regulatory rollback — with Trump’s support — has come via acts of Congress, which has used a power known as the Congressional Review Act to eliminate more than a dozen Obama-era initiatives, including one that was intended to prevent people with mental disabilities from buying guns. The review act, which had been used only once before the Trump administration, can nullify federal regulations for 60 legislative days after they have been finalized with a simple majority vote.

But as the documents released Thursday show, individual federal agencies have heard the White House’s call to reconsider a broad array of regulations, even though these agencies must go through a time-consuming process to repeal any rule.

Coal mining has been an area of particular attention.

The EPA, in addition to moving to reconsider a landmark Obama-era climate change rule that would have effectively forced the shutdown of dozens of coal-burning power plants, has separately moved to reconsider a rule that requires new precautions for the disposal of coal ash, a step taken after a series of accidents involving coal-ash ponds. The agency also has separately moved to delay the implementation of a rule intended to prevent damage to aquatic life as a result of water discharges from power plants, including those that burn coal. Congress repealed a measure intended to limit coal mining from destroying area streams. The Department of Interior repealed a moratorium on new leases of federal land for coal mining, and began the process of rejecting rules intended to increase royalty payments coal mining companies must pay to the federal government for coal extracted from this federal land.

In the early summer, just as a rule to put new limits on beryllium, an industrial mineral linked to lung disease, went into effect, the Occupational Safety and Health Administration proposed a rule to revoke some of its provisions. This fall, the Department of Health and Human Services issued two rules rolling back a federal mandate that employers include birth control coverage in their health insurance plans.

To help with the deregulatory effort, Trump ordered agencies in February to create teams to identify rules that could be cut, task forces that in many cases include members who previously worked for private-sector employers that had sought to weaken or kill the same rules, and others that may be positioned to profit if certain regulations are undone.

The rollbacks are taking place in the form of rules and less formal ways, such as so-called guidance documents. The Office of the Comptroller of the Currency, which oversees the nation’s biggest banks, has for example been easing restrictions on those banks without having to write new regulations — by changing policy in footnotes of government manuals in some cases.

And a New York Times investigation recently found that, under Trump, the EPA has adopted a more lenient approach to polluters than the previous two administrations, with significant declines both in the number of overall cases filed, as well as in fines and environmental repairs. That enforcement slowdown has coincided with major policy changes ordered by the team of Scott Pruitt, the agency’s administrator, after pleas from oil and gas industry executives, according to internal documents obtained by The Times.

“That is some of the biggest deregulatory action,” said Stuart Shapiro, a professor at Rutgers University who served from 1998 to 2003 in the Office of Information and Regulatory Affairs under Republican and Democratic administrations. “It sets the expectation for businesses that the cop is not on the beat.”