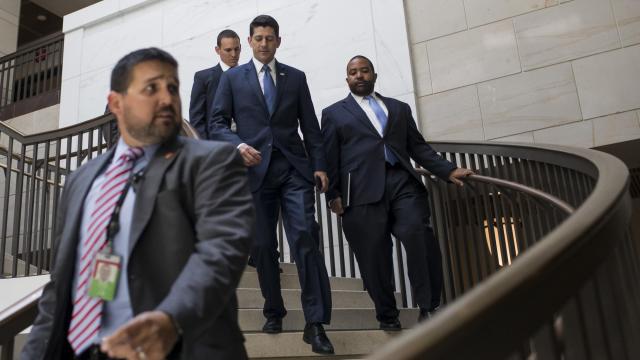 WASHINGTON — President Donald Trump said Friday that he would not sign a compromise immigration bill worked out by Republican lawmakers in the House, severely damaging its prospects before a vote planned for next week.

Speaker Paul Ryan is planning to hold votes on two immigration measures: a hard-line conservative bill, which is almost certain to fail, and new legislation worked out by Republican immigration moderates and House conservatives, which Ryan promoted Thursday as a “very good compromise” that he hoped would pass.

On Friday morning, Trump seemed to dismiss the measure.

“I’m looking at both of them,” Trump said on “Fox and Friends.” “I certainly wouldn’t sign the more moderate one.”

Just Wednesday, Ryan told House Republicans that Trump was enthusiastic about their effort on immigration.

A draft of the compromise bill was circulated among lawmakers Thursday. The measure would make sweeping changes to the nation’s immigration system, shifting preference from the family members of U.S. citizens to employment-based criteria, and creating a special visa program that would give young unauthorized immigrants the chance to become citizens based on factors like employment and education.

The bill would also toughen rules for asylum-seekers, and would provide billions of dollars for Trump’s promised wall on the southwest border while imposing new limits on legal immigration.

Even before the president’s remarks, the bill’s passage seemed highly uncertain. Democrats are all but certain to vote against it, and the measure was quickly labeled “amnesty” by critics on the right. Republican leaders have said they did not want to pass immigration legislation that Trump would not sign.

The compromise bill is the product of weeks of negotiations among lawmakers as House Republican leaders moved to defuse a rebellion from moderates seeking action to protect young immigrants who were brought to the country illegally as children. The moderates used a parliamentary move called a discharge petition in an attempt to force House action, but they fell two signatures short of what they needed to succeed.

Trump’s comments instantly undercut Ryan’s argument against the moderates’ petition drive, which the speaker had said was pushing legislation that the president would never sign.

On Thursday, Ryan said that with the compromise bill, the House was “bringing legislation to the floor that, if it passed all the way through the process, would make law.”

“The last thing we want to do,” Ryan said, “is have some kind of an exercise in futility where we have, like, a discharge petition that brings something that will never make it into law.”