Trump Says He Will Nominate Acting Secretary to Lead VA 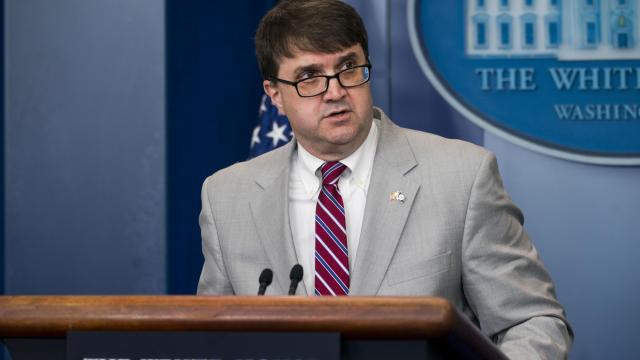 WASHINGTON — President Donald Trump said Friday that he intended to nominate Robert Wilkie, the acting secretary of Veterans Affairs, to take over the sprawling agency — a move the president said would surprise even Wilkie because he had not told him.

The president slipped the announcement into remarks he made ahead of a meeting on prison reform. He praised several members of his Cabinet who had worked on the issue, including Wilkie, “who, by the way,” he said, “has done an incredible job at the VA and I’ll be informing him in a little while — he doesn’t know this yet — that we’re going to be putting his name up.”

Wilkie, who was sitting in the front row at the event, stood up and shook Trump’s hand after hearing the news. “I’m sorry that I ruined the surprise,” Trump said.

The Department of Veterans Affairs has been without permanent leadership since the previous secretary, David J. Shulkin, was fired by tweet in March and Trump’s chosen successor, Dr. Ronny L. Jackson, withdrew from consideration in April after disparaging reports about him circulated before his scheduled confirmation hearing.

In the turmoil, a number of top staff members have left the department, which has been struggling for years with vast hurdles to providing timely and efficient care.

Trump reportedly considered a number of outsiders for the top post, but in Wilkie, he picked a career Washington insider who has worked for Sens. Jesse Helms, Trent Lott and Thom Tillis, and was an assistant defense secretary under George W. Bush.

If confirmed by the Senate, Wilkie, 55, would take over the second-largest department in the federal government, overseeing a 360,000-person workforce and the vast veterans health care system. In his current role as undersecretary of defense for personnel and readiness, Wilkie oversees the health and welfare of all military personnel.

Wilkie, the son of a highly decorated artillery officer who was wounded three times in Vietnam, grew up on Army bases and joked that he was born in khaki diapers. After law school, he served in the Navy and Air Force Reserves. He has regularly published scholarly articles on such topics as the future of NATO and the precedents for modern insurgency warfare.

He became acting secretary of Veterans Affairs in March after Shulkin, who was the focus of a scathing inspector general report on excessive travel spending, was fired.

Shulkin had been locked in a sharp dispute within the administration over how veterans should receive access to government-funded private health care. Shulkin and most veterans groups favored keeping control of access in the hands of department doctors, while some in the White House favored more unfettered access. Critics say unfettered access would create huge costs that would eat away at other government-funded care.

Wilkie has given little indication of his views on the issue. In a video message to staff members in April, he described his philosophy for leading the department.

“We must have a bottom-up organization. The energy must flow from you who are closest to those we are sworn to serve. It is from you that the ideas we carry to the Congress” will come, he said. “Anyone who sits in this chair and tells you he has the answers is in the wrong business.”

Veterans organizations and lawmakers expressed cautious optimism about the pick, and welcomed the end of a period of uncertainty.

In a statement, Disabled American Veterans said it was pleased with the selection, adding, “The acting secretary is himself a veteran, and we have no doubt he will continue to build upon the strong foundation put in place” by his two predecessors.

Sen. Jon Tester of Montana, the top Democrat on the Senate Veterans Affairs Committee, who took the lead in raising concerns about Trump’s earlier choice to run the agency, said he already had a good working relationship with Wilkie.

“I look forward to sitting down with him again to have an in-depth conversation about his vision and plan for the VA,” Tester said in a statement.

Sen. Johnny Isakson, R-Ga., chairman of the VA Committee, said his experience working with Wilkie since late March had been positive.

“I’ve enjoyed my time getting to know Robert Wilkie and working alongside him to advance community care legislation through Congress,” Isakson said in a statement.

The confirmation process should not pose any surprises for Wilkie, who has shepherded several other presidential nominees, including Defense Secretary Jim Mattis, through the vetting process.

Wilkie would take the reins of the department as it is trying to claw itself out of years of mismanagement and dysfunction. The crush of retiring Vietnam veterans and wounded veterans from Iraq and Afghanistan overwhelmed the department during the Obama administration, leading to backlogs of benefits applications and delays in health care that led to the resignation in 2014 of Secretary Eric K. Shinseki.

In the years since, the department has made halting progress as it streamlined benefits reviews and overhauled hiring for medical professionals. But it still faces huge challenges. The most pressing is the modernization of the health care system’s 40-year-old electronic records — a $16 billion effort Wilkie approved Thursday.

Health care experts say the modernized system is a crucial scaffolding for other reforms that will speed care to patients while saving money, but updating the system is no simple task. The department has spent nearly $1 billion on the project since 2001 without success.

Phil Carter, a senior researcher at the RAND Corp., said having a leader familiar with both military and veterans services could help smooth what has long been a rocky relationship between the Defense Department and the Department of Veterans Affairs.

“They have been at loggerheads culturally for a long time,” he said. “Solving that challenge is really important for a lot of health and benefits reasons.” If confirmed, Carter said, Wilkie would take the helm with the wind at his back. The Senate is expected to pass another long-sought department priority next week: a major rewrite of the Veterans Choice Program to expand options for veterans to see private doctors at government expense. As secretary, Wilkie would be responsible for putting the new law into place.

While Trump’s choice of a Washington insider to run the department may seem to run counter to his promise to “drain the swamp,” Carter said: “At some point, you have to run the agency. That trumps presidential rhetoric. Running the agency well is a win-win for White House and veterans.”