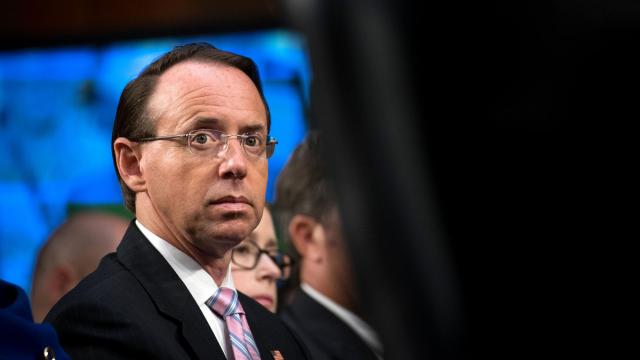 WASHINGTON — President Donald Trump said on Wednesday that he wants to keep in place the deputy attorney general, Rod Rosenstein, amid speculation about Rosenstein’s future, which was thrust into doubt by revelations that he had discussed secretly taping the president and removing him from office.

The two were scheduled to meet on Thursday to discuss Rosenstein’s comments, which were revealed in a New York Times article last week, prompting Rosenstein to tell senior White House aides over the weekend that he was considering resigning.

Asked during a news conference at the United Nations whether he planned to fire Rosenstein, Trump said, “I would certainly prefer not doing that.”

Trump added: “We’ve had a good talk. He says he never said it, he doesn’t believe it, he gets a lot of respect from me. He’s very nice, and we’ll see.”

Trump also said he was considering delaying their meeting because he wanted to focus on Thursday’s high-stakes hearing for his Supreme Court nominee, Judge Brett Kavanaugh, and one of the women who has accused him of sexual assault, Dr. Christine Blasey Ford.

White House officials declined to say whether the meeting between Rosenstein and Trump had ever been planned for or put on the president’s calendar.

Over the weekend, Rosenstein told senior White House advisers that he was willing to resign. On Monday morning, as Rosenstein planned to head to the White House, news reports emerged that he was quitting, sending the situation into further chaos.

Rosenstein headed to the White House expecting to be fired after the reports. Once there, he asked to meet with Trump before any decisions were made about his future, according to people briefed on the discussions. He also said that he wanted to leave on amicable terms and did not want to trigger the president’s ire.

But some White House officials believed that only Trump could legally accept Rosenstein’s resignation, and the president was in New York for the U.N. General Assembly. Rosenstein left the White House hours later, job intact.

That afternoon, Sarah Huckabee Sanders, the White House press secretary, said in a statement that the men would meet when Trump returned.