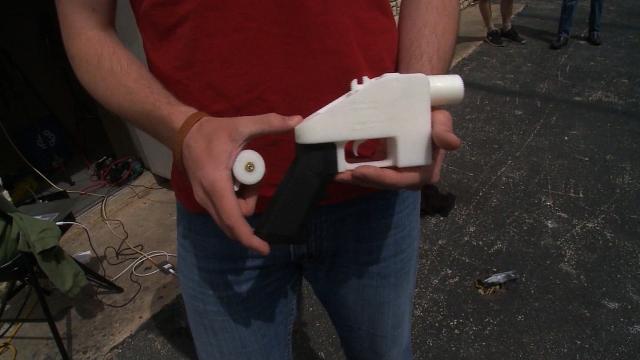 The Trump administration supports an existing law they say makes it illegal to own or make homemade plastic guns, a White House official said Tuesday, coming hours after President Donald Trump tweeted that the availability of the firearms "doesn't seem to make much sense!"

"The President is committed to the safety and security of all Americans; he considers this his highest responsibility," deputy press secretary Hogan Gidley said to reporters aboard Air Force One. "In the United States, it's currently illegal to own or make a wholly plastic gun of any kind, including those made on a 3D printer."

The administration supports the three-decade-old law, Gidley said, "and will continue to look at all options available to us to do what is necessary to protect Americans while also supporting the First and Second amendments."

The comments came one day before a government settlement would have allowed plans to be posted online following a settlement with gun-rights activists.

On Tuesday evening, a federal judge issued a temporary restraining order blocking the federal government from allowing distribution of downloadable 3D-printed guns, according to a tweet from the Washington State Attorney General's Office.

"I am looking into 3-D Plastic Guns being sold to the public. Already spoke to NRA, doesn't seem to make much sense!" the President tweeted Tuesday, without offering further details about what he'll do about the weapons.

"Regardless of what a person may be able to publish on the Internet, undetectable plastic guns have been illegal for 30 years," Cox said. "Federal law passed in 1988, crafted with the NRA's support, makes it unlawful to manufacture, import, sell, ship, deliver, possess, transfer, or receive an undetectable firearm."

But last month, NRA spokeswoman Dana Loesch made a different argument in an NRATV segment saying that Sen. Chuck Schumer, D-New York, was "freaking out" over the prospect of criminals printing assault-style weapons when there were laws that forbade "prohibited possessors" from doing so.

"I'm actually talking about what Democrats call, quote unquote, 'ghost guns' and the what the rest of us call freedom and innovation: 3-D printed guns," she said.

Loesch went on to say that she believed any attempt to outlaw the technology or regulate 3D printers under the National Firearms Act would be "absolutely unenforceable."

Speaking to CNN's "New Day" shortly before Trump's tweet on Tuesday, Fred Guttenberg, whose daughter was killed in the Parkland, Florida, high school shooting in February, said the ability to download blueprints for the firearms doesn't make sense.

"It's horrible on a lot of levels. One week ago, I actually was in DC with some folks from the Newtown Action Alliance and nobody in DC on a legislative level even knew about this," Guttenberg told CNN's Alisyn Camerota.

In June, a gun-rights group, Defense Distributed, reached a settlement with the government that would allow it to post 3D printable gun plans online. According to the settlement, the plan wasn't supposed to be online until Wednesday but more than 1,000 people had already downloaded plans to print an AR-15 style semiautomatic assault rifle, according to the office of Pennsylvania Attorney General Josh Shapiro.

The settlement had ended a multiyear legal battle that started when Defense Distributed founder Cody Wilson posted designs for a 3-D printed handgun he called "The Liberator" in 2013. The single-shot pistol was made almost entirely out of ABS plastic -- the same material Lego bricks are made from -- and could be made on a 3D printer.

Trump has previously offered tepid support for tougher gun restrictions, particularly after the Parkland shooting, but later backed off those positions to align himself with NRA proposals.