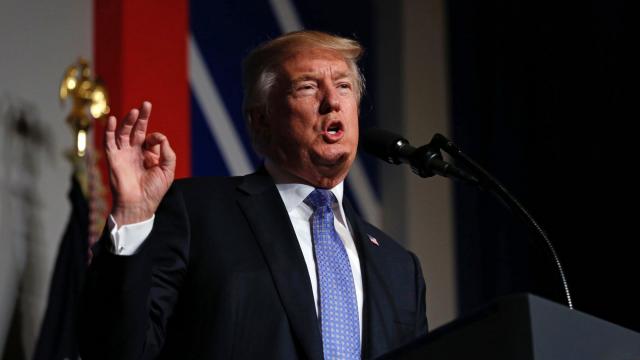 (CNN) — President Donald Trump was only a half-hour into his nine-hour flight to the G20 summit here in the Argentine capital when he decided to pull the plug on the most hotly anticipated moment of his trip: a lengthy face-to-face with Russian President Vladimir Putin.

But while Trump's abrupt decision quashed concerns that the President would repeat his cozy performance alongside Putin during their last meeting in Helsinki, Finland, new allegations by the President's former longtime attorney Michael Cohen revived questions about Trump's financial ties to Russia as he arrived for the international summit.

Trump's planned meetings with a half-dozen other world leaders -- combined with the possibility of diplomatic snafus -- offer little promise of clearing the smoke of suspicion that is once again following him abroad.

The President also refused to back away from the shadow of the Mueller investigation, beginning his day with a fresh pair of tweets about the Cohen saga, saying his business dealings while a candidate were "very legal & very cool."

"The Russian Witch Hunt Hoax, which is hopefully now nearing an end, is doing very well. Unfortunately, it probably does undermine our relationship with Russia," Sanders said, even as she insisted Trump's meeting with Putin was canceled because of Russia's seizure of Ukrainian Navy ships and sailors earlier this week. Trump also said the situation in Ukraine was his "sole reason" for scrapping the meeting.

A Kremlin spokesman told Russian state media earlier Friday that Trump and Putin would have a "brief impromptu meeting" on the sidelines of the G20. Though the two leaders are likely to see each other and shake hands alongside other leaders at the international summit, a White House official said no meeting had been rescheduled between the two leaders.

The official said the Kremlin appeared to be "trying to save face" with the Friday morning statement.

Trump arrived in Buenos Aires for the summit late Thursday night, marking the first time he has set foot in Latin America in his nearly two years in office and kicking off what promises to be a whirlwind 48-hour visit. Friday will amount to the President's busiest day of diplomacy, but his most important meeting of the summit -- his dinner with Chinese President Xi Jinping -- doesn't come until a day later.

Trump's aides hoped a signing ceremony for the recently struck United States-Mexico-Canada trade agreement would act as a centerpiece of the trip. At the Friday morning event, Trump hailed the revised NAFTA free trade deal, rebranded as the USMCA, as a "truly groundbreaking achievement" alongside his Canadian and Mexican counterparts.

Persistent disputes with Canadian Prime Minister Justin Trudeau -- including over US steel and aluminum tariffs -- led to questions about who precisely from the Canadian side would be doing the signing, but Trudeau stood next to Trump and touted the deal as a success for middle class workers. Still, he pressed Trump during the event to remove steel and aluminum tariffs imposed earlier this year.

Trump has hailed the agreement as evidence of his negotiating prowess and said the pact would benefit American workers. He's been unnerved in recent days by a shaky stock market and factory closures by General Motors, according to people familiar with the matter, and is hoping to be able to tout the new trade agreement in Argentina.

Trump was darting from bilateral meetings to summit sessions and back, starting with an early morning breakfast alongside Argentine President Mauricio Macri, the summit's host. Trump has known Macri for decades, beginning when both were real estate developers.

"I want to just say I've been friends with Mauricio for a long time, many years," Trump said at the Casa Rosada, the presidential mansion. "He was a young man, a handsome man."

Trump recollected a deal with Macri's family to develop the West Side railroad yards -- one of the "largest jobs in Manhattan," in Trump's telling.

"That was in my civilian days," Trump said. "Little did you realize I would become president."

Trump said in their meeting, he'd discuss trade and military purchases with the Argentine president.

From there, Trump joined the large gathering of G20 leaders, finding himself face-to-face with the collection of global leaders he has sometimes rebuffed.

The gathering of leaders also gave way to a brief encounter with the Saudi Crown Prince Mohammed bin Salman, the first time Trump has met with the crown prince in person since the murder of the Saudi journalist Jamal Khashoggi.

Trump "exchanged pleasantries" with bin Salman, a White House official said. Asked about the encounter, Trump said he and the crown prince "had no discussion."

White most of the world has castigated bin Salman, Trump has taken the opposite approach, indicating he has no plans to cut ties to Saudi Arabia.

A pull-aside chat is scheduled with Turkish President Recep Tayyip Erdoğan, whose government has pushed for greater punishment of Saudi Arabia for Khashoggi's killing, which occurred at a consulate in Istanbul. Trump is also slated to speak on the sidelines with South Korean President Moon Jae-in, who has acted as an avid cheerleader for Trump's diplomatic opening with North Korea.

Less enthusiastic has been Japanese President Shinzo Abe, who's expressed concern about easing pressure on Pyongyang without any corresponding steps from the North Korean regime.

Abe also offered hyperbolic praise as he sat before the cameras alongside his US counterpart, congratulating Trump "on your historic victory in the midterm elections in the United States."

The Japanese President appeared to follow a pattern of foreign leaders who have sought to compliment the US President in these settings.

Trump was supposed to sit later in the day with German Chancellor Angela Merkel, who hosted last year's G20 and has withstood sustained attacks by Trump over auto imports and trade. But Merkel's government plane suffered technical problems en route, and she was forced to turn back to Cologne. She was expected to arrive late to the summit, and the meeting did not appear on Trump's schedule for Friday.

Merkel recently announced that she will not run for another term as chancellor after acting as Europe's de facto leader for more than a decade.

G20 members are also bracing for US intransigence as the leaders work to release a final joint communique from the assembled leaders -- a Trump administration position that has hampered efforts to release communiques at past summits.

A source familiar with discussions said US national security adviser John Bolton has positioned the US's stance on the communique's language as a take-it-or-leave-it offer.

A White House official said the US is "committed to working toward consensus on the communique but will stand firm against language that prejudices US positions and is willing to walk away if necessary."

The official said the US is leaving some room for compromise, but has made clear that there are certain positions regarding the communique that are non-negotiable. At least "not right now," the official said.

Ultimately, a decision on the communique will come down to the President himself -- and his willingness to compromise versus being cast as the odd man out.

Hanging over it all will be the questions sparked by the latest twist in special counsel Robert Mueller's ongoing investigation -- just the latest instance of the Mueller investigation following Trump outside the United States.

Trump's second foreign trip, in July 2017, became another key moment in the Mueller investigation as the President and his aides worked to craft a statement on behalf of his eldest son concerning the now-infamous meeting with a Russian lawyer at Trump Tower a year prior. A year later, as the President prepared to fly to Helsinki to meet with Putin, the Justice Department announced the indictment of Russian intelligence officers linked to election interference.

The Cohen plea agreement on Thursday became the latest example, and soon after the news emerged Trump moved to scrap his meeting with Putin. The White House said Trump had decided to cancel the get-together following a meeting with his top foreign policy advisers after boarding Air Force One, even though no new information had publicly emerged.

Scrapping the meeting with Putin, though, did not eliminate all of the President's flair for make-or-break drama. He is still scheduled to join Xi, the Chinese President, for a working dinner on Saturday to hash out a possible ceasefire to the trade war that has roiled their countries and threatens to wreak havoc on the global economy if the ratcheting-up persists.

"I think we're very close to doing something with China, but I don't know that I want to do it, because what we have right now is billions and billions of dollars coming into the United States in the form of tariffs or taxes. So I really don't know," the President said before departing Washington. "But I will tell you that I think China wants to make a deal. I'm open to making a deal. But, frankly, I like the deal we have right now."