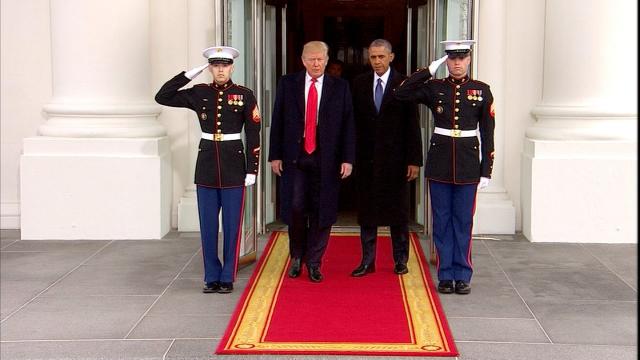 Donald Trump has a new favorite target -- the guy who used to have his job.

The President is unloading a barrage of attacks on Barack Obama, questioning his motivations in the Russia drama and taking aim at his political legacy, knowing that by choice and tradition, the former commander in chief only has a limited capacity to fight back.

It's an increasingly irksome strategy to Obama's former aides, who must look on as the President trashes their former boss and his achievements, including the Affordable Care Act, climate change and diplomatic thaws with Cuba and Iran.

But, people close to the former president say he has no desire to get dragged into a direct confrontation with his successor despite the intensifying fire from Trump.

Obama plans to stay largely off the political stage, consistent with his behavior since leaving office in January, and in deference to protocol that suggests former presidents should avoid play-by-plays of their successor's performance. There have been a few interventions, on health care and climate change for instance, and several speeches around the world in which Obama implicitly criticized Trump's worldview. But he's avoided direct combat.

Trump, of course, is happy to fill the vacuum as he seeks a new foil to define his administration and keep his political base engaged.

An expert in the political art of distraction, the President is seizing on a Washington Post story in which an Obama aide admitted the former administration could have done more to stop Russian election interference.

Long loath to admit that Moscow did indeed play a role in the election that made him President, Trump now seems happy to acknowledge it -- if he can use the revelations to attack the man who sat in the Oval Office before him.

"The real story is that President Obama did NOTHING after being informed in August about Russian meddling. With 4 months looking at Russia ... under a magnifying glass, they have zero "tapes" of T people colluding. There is no collusion & no obstruction. I should be given apology!" Trump tweeted Monday.

The administration seized on new revelations like a lifeline after months of incoming fire over claims Trump's campaign aides colluded with Russia, that are now being probed by a special counsel.

"So the question is, if they didn't take any action, does that make them complicit? I think there are a lot of questions that need to get answered about who knew what and when," Spicer said.

Obama in fact, did confront Russian President Vladimir Putin directly, imposed new sanctions on Russia, and initiated a report by intelligence agencies on the extent of the alleged election interference that was published before he left office. The Post reported last week that he also ordered the insertion of cyber weapons inside Russian infrastructure that could be activated at a later date.

The Post also said that Obama did not impose harsher measures out of concern that Putin would escalate the situation. Aides said he did not do more at home to avoid the impression that he himself was interfering in an election that Trump had already claimed was rigged. They also faulted Capitol Hill Republicans for not accepting a bipartisan effort to warn against Russian influence last year.

The emerging strategy has many attractions for the White House.

It offers the relief of going on offense after months under siege. Trump can use it to blur the argument about accusations that he or his aides are guilty of wrongdoing in the Russia affair.

Media coverage of the President's charges that Obama did little to halt Russian meddling meanwhile tend to obscure the fact that the current President has so far done little to defend the US electoral system.

Still, it is not clear whether Trump's targeting of Obama, consistent with his political strategy of seeking an enemy, will have lasting rewards.

It can't do much to dispel the biggest cloud over his administration: Eventually, special counsel Robert Mueller will decide if Trump or his campaign aides have a case to answer on their alleged links with Russia, or whether the President obstructed justice in his firing of FBI Director James Comey.

And more immediately, the President will likely have to answer more comprehensively how he plans to protect future elections from interference.

Spicer could only cite a cybersecurity executive order and a commission on voter fraud Monday, when asked how Trump has responded to allegations of Russian meddling so far.

Obama, currently vacationing in Indonesia, is keeping up with the news but will stick to his decision not to wage a tit-for-tat debate with Trump, an aide said.

That's why he confined his comments on the Senate debate on repealing his signature health care law to a detailed Facebook post, rather than using an on camera intervention to defend his biggest domestic achievement.

"Simply put, if there's a chance you might get sick, get old, or start a family -- this bill will do you harm," Obama wrote last week.

The former President will have a chance to more directly channel his political thoughts when he campaigns for Ralph Northam in the Virginia gubernatorial election in the fall, the Obama aide said.

Until then, his supporters will try to fill the gap, taking to Twitter and television studios to defend their former boss -- though their rebuttals lack the exposure of Trump tweets driving the showdown.

Privately, Obama veterans express disdain for Trump's abilities as a president and his character. Many believe he is wrecking America's image abroad.

Some also believe he is attacking the former president to disguise his own political woes.

"The administration's attacks on President Obama's response to Russia cyber meddling is a transparent effort to distract from the terrible impact of their ACA repeal bill," a former Obama White House official said in a statement on Monday.

Many presidents seek to overturn the influence of their predecessors. Few have done it so viscerally, quickly and personally as Obama's successor.

He withdrew from the Trans-Pacific Partnership, the trade pact that was at the center of Obama's Asia pivot strategy. He is pulling the US out of the Paris climate deal - which the former president was instrumental in negotiating.

He has rolled back Obama's opening to Cuba and his "America First" foreign policy is a repudiation of the multilateral approach of the previous administration.

While Trump and Obama had cordial conversations during the transition, when the 44th president worked to prepare his successor and sought to fulfill his constitutional responsibilities, they have no relationship now.

In fact, Trump has lashed out at Obama while under pressure.

"I inherited a mess, it's a mess, at home and abroad. A mess, jobs are pouring out of the country ... low pay, low wages, mass instability overseas no matter where you look, the Middle East, as disaster, North Korea," Trump said at a press conference in February.

So far however, the President has proved more adept at disruption and dismantling than implementing replacements for Obama's policies.

And while he's often been vocal in decrying Obama's achievements, Trump's actions have not always have been as sweeping as he suggested.

For instance, he did not shutter the US embassy in Cuba -- opened by Obama -- as some Republicans had hoped. Even if the GOP manages to repeal Obamacare, some aspects of the law, including protections for those with pre-existing conditions will endure in some form and conservatives see the reform plans as "Obamacare lite." Despite toughening US policy towards Iran, Trump has so far honored the nuclear deal brokered by Obama.

And it's unlikely that Trump's Obama bashing will linger long in history.

That's because Obama has already done all he can to secure his reputation for posterity.

He is likely to be judged on his efforts to rescue the economy after the Great Recession, his decision not to strike Syria over its use of chemical weapons, and more intangible impressions, including his personal integrity and political skills, and his status as the first African-American president.

Trump's own actions will be instrumental in how future generations see him.

If for instance, his moves on health care and climate change backfire and come to be seen as historic mistakes, Obama's reputation is likely to prosper by contrast with his successor, whatever Trump says now.

If Trump makes his presidency a roaring success, he could dim Obama's star.