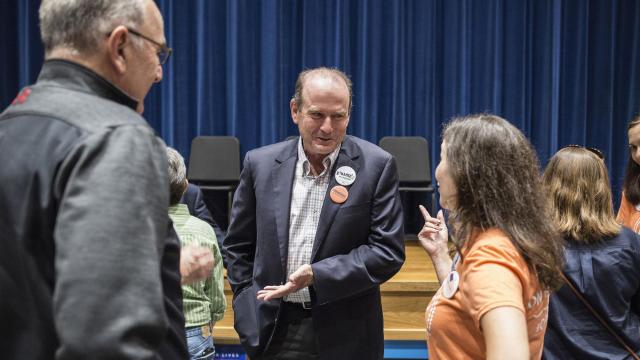 HOUSTON — J. Mark Metts, a 60-year-old partner at one of this city’s prestigious law firms, had never voted for a Democratic presidential candidate until 2016. Now he and some of his neighbors in the moneyed River Oaks enclave of Houston are about to oppose a Republican once again, to register their disapproval of President Donald Trump.

“With Congress not really standing up to Trump, this election is becoming a referendum,” Metts said, explaining why he would no longer support the re-election of Rep. John Culberson, an eight-term Republican.

Culberson is now running roughly even with the Democratic candidate, Lizzie Pannill Fletcher, according to a New York Times/Siena College poll last week — an extraordinary development in a district that has not elected a Democrat since before an oilman named George H.W. Bush won here in 1966, and one that illustrates how difficult Trump has made it for his party to retain control of the House.

If the 2016 election hinged in large part on a rightward shift among working-class whites who deserted Democrats in the presidential race, Tuesday’s House election may turn on an equally significant and opposite force: a generational break with Republicanism among educated, wealthier whites — especially women — who generally like the party’s pro-business policies but recoil from strident, divisive language on race and gender.

Rather than seeking to coax voters like these back into the Republican coalition, Trump appears to have all but written them off, spending the final days of the campaign delivering a scorching message about preoccupations like birthright citizenship and a migrant “invasion” from Mexico that these voters see through as alarmist. He amplified his fear-peddling Wednesday night with an online video that is being widely condemned as racist, showing a Mexican man convicted of killing two California deputies with a voice-over saying “Democrats let him into the country.'’

In Republican-leaning districts that include diverse populations or abut cities that do — from bulwarks of Sunbelt conservatism like Houston and Orange County, California, to the well-manicured bedroom communities outside Philadelphia and Minneapolis — the party is in danger of losing its House majority next week because Trump’s racially-tinged nationalism has alienated these voters who once made up a dependable constituency.

Traditional Republicans warn that Trump’s conduct is further narrowing his party’s appeal on the eve of the election, catering to a rural base in conservative states like Missouri, North Dakota and Montana that will decide control of the Senate at the possible expense of the Republicans’ House majority and crucial governorships.

“The divisiveness may play well in some parts of the country but it doesn’t play everywhere,” said the speaker of the Texas House, Joe Straus, who has sought to keep his party from drifting too far right. “It’s hard to grow a party when your whole approach is to incite the base.”

To see incumbent Republicans like Culberson or Rep. Pete Sessions, whose district is in an affluent part of the Dallas area, locked in difficult re-elections “would have been unthinkable just a few years ago,” Straus said.

More ominous for the GOP is that the desertion of educated whites following Trump’s 2016 win could establish a new Democratic coalition in future elections, one that would certainly return to the polls in 2020. That would represent the mirror opposite of 1964, when Barry Goldwater lost the presidential race but made inroads into traditionally Democratic precincts among culturally conservative and economically prosperous voters — presaging Republican success further down the ballot in the years to come.

Just as Goldwater began unmooring conservative whites away from their Democratic roots, it is easy to see which demographic could shift most fundamentally on Election Day: college-educated white women, who were once fairly reliable Republican supporters. The effect of Trump with these voters is unmistakable: They supported Mitt Romney over President Barack Obama by 6 percentage points in 2012, before backing Hillary Clinton by 7 points four years later.

College-educated white women now say they prefer Democrats to control Congress by 18 points, according to a survey by Marist College and NPR.

In moderate areas, the Republican coalition has long depended on upscale whites casting aside their more liberal views on issues like gun control and abortion to support GOP economic policies. Trump’s national message does virtually nothing to accommodate those voters.

“I’m not hearing anything helpful at all,” said Gene DiGirolamo, a moderate Republican state legislator from Bucks County, outside Philadelphia, where Republicans are struggling to hold on to a House seat and hold back Democratic gains in state races.

In his area, DiGirolamo said, Trump’s support “among independents has slipped dramatically from when he was first elected.”

Perhaps nowhere has Trump’s persistent use of inflammatory language become as much of an issue as in Pennsylvania, where Republicans were already bracing to suffer losses in some newly drawn House districts before a gunman fixated on immigration massacred 11 worshippers at a Pittsburgh synagogue Saturday.

At a gathering in a tavern outside Philadelphia on Monday evening, supporters of Scott Wallace, a Democrat running in the state’s most hotly contested House race, denounced Trump for his “cruelty” and alluded repeatedly to the president’s rhetoric on race and national identity. Addressing a tightly packed crowd, former Rep. Patrick Murphy, a Democrat who used to represent the area, warned that “people who hate feel so emboldened to act on it.”

The suburbs around Philadelphia used to be a reliable Republican bastion. But Shelley Howland, a Republican who attended the pro-Wallace event, said Trump represented a breaking point.

A supporter of abortion rights and gun control, Howland voted two years ago for Hillary Clinton over Trump, but stayed loyally Republican in the congressional election, supporting Wallace’s opponent, Rep. Brian Fitzpatrick, who is now seeking his second term. She said she would not support Fitzpatrick again.

“This year, it’s going to be a straight Democratic ticket,” said Howland, 65, lamenting “this whole movement to the alt-right, Steve Bannon in the White House, Trump in the White House.” Wallace, an investor whose grandfather served as vice president, cast his campaign as an opportunity for Bucks County to repudiate a president who has unleashed a “Pandora’s box” of dangerous social turmoil.

“The tone that the president has set is absolutely toxic to relations between people of different faiths and different races and different sexual orientations,” Wallace said.

Fitzpatrick, whose campaign did not respond to emails and phone calls seeking comment, has sought distance from Trump and brands himself as an “independent” lawmaker in campaign materials. Like other Bucks County Republicans, he has collected support from labor unions and endorsed policies like gun control that break with the national Republican agenda.

But former Rep. Phil English, R-Pa., said his party was now grappling with what amounts to a mortal political threat. Alluding to “challenges right now with the brand,” English said his party would likely face painful setbacks in precincts that evoke silk stocking Republicanism, such as Philadelphia’s Main Line.

“Southeastern Pennsylvania has clearly made the transition from being one of the mainstays of the Pennsylvania Republican statewide base, and a significant part of the national Republican source of support, to being an enormous challenge,” English said, noting that national cultural divisions had driven away swing voters.

In Culberson’s well-heeled district, where even the restaurants with ample parking offer valet services, Trump is as polarizing as he was when he narrowly lost the seat in 2016.

“I’m staying focused on John Culberson and who I am,” Culberson said in an interview when asked whether Trump was an asset or liability here, repeating a variation of the same phrase multiple times.

But the lawmaker acknowledged that this year is “unusual” because of what he termed the “infinite” amount of money flowing in for Fletcher, who has raised nearly twice what he has.

Fletcher, a corporate attorney who grew up attending the same Episcopal Church as George H.W. Bush, said voters here were attracted to the GOP that the former president exemplifies.

“They were people who saw Republicans as the party of good government and moderation and I think they’re not seeing that now,” she said, scorning Culberson for not standing up to Trump.

Like every race in Texas, this House contest has been overshadowed by Rep. Beto O’Rourke’s challenge of Sen. Ted Cruz. And Cruz’s allies quietly concede that having Trump come to Houston last month hurt them, and by extension Culberson, with moderate voters in Harris County, where the president was trounced. (The congressman was notably absent from the Trump rally). But the deeper structural problem for Texas Republicans, one that may outlast this year’s Senate race, is that their long-running fears about Hispanics consolidating behind Democrats may prove to be less worrisome than the prospect of an even more reliable bloc of voters finding a new political home.

“The more explosive element is college educated white women,” said Democratic strategist Paul Begala. “They are not itinerant voters like a lot of the Democratic base — they’re rooted and they always vote.”

It is almost eerily symmetrical, the possibility that Texas Republicans could see their iron grip on the state loosened because of a political realignment in the state’s population centers. That was where Texas Democrats first saw their own supremacy challenged.

“The areas that were the first to break away from the Democrats decades ago are now showing signs they could break away from Republicans now,” said Straus, whose family helped build the modern Republican Party in San Antonio. And he did not hesitate to identify the proximate cause of the shift.

Trump, he said, has “changed the Republican Party in ways that are just less appealing to the traditional Republicans and independents we’ve always relied on.”