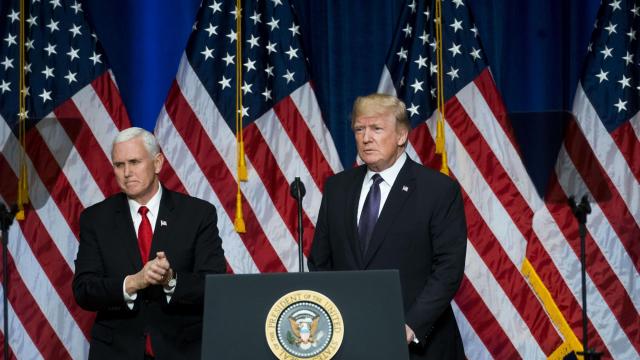 WASHINGTON — President Donald Trump’s first national security strategy envisions a world in which the United States confronts two “revisionist” powers — China and Russia — that are seeking to change the global status quo, often to the detriment of America’s interests.

But while the document outlines a detailed plan to push back against China’s global economic ambitions, it says little about dealing with the kind of cyber and information warfare techniques that Moscow used to try to influence the 2016 presidential election.

The strategy, which Trump presented in a speech Monday afternoon, is the first comprehensive effort by his administration to describe an all-encompassing strategic worldview. Administration officials said it was drawn from speeches Trump had delivered during the presidential campaign, in Europe and Asia and at the United Nations.

It describes a world that was on a three-decade holiday from superpower rivalry, and it suggests that holiday is over.

“After being dismissed as a phenomenon of an earlier century, great power competition returned,” the document says. It then tries to lend intellectual coherence to a foreign policy that is often defined by Trump’s tweets or his gut instincts about which world leaders are strong, which are weak and which are prepared to cut a deal.

The president, his aides said, enthusiastically approved the strategy and wanted to present it himself, something that his two immediate predecessors, Barack Obama and George W. Bush, did not do when their congressionally mandated strategies were published.

While the document’s description of pushing back against China on trade is familiar from the campaign, its description of the challenge posed by Russia seems at odds with Trump’s own refusal to criticize President Vladimir Putin for his seizure of Crimea, efforts to destabilize Ukraine and his violations of a key nuclear treaty with the United States. In fact, the document describes Russia’s behavior in far more critical terms than Trump himself often does.

China and Russia, the document says, “are determined to make economies less free and less fair, to grow their militaries, and to control information and data to repress their societies and expand their influence.”

“These competitions require the United States to rethink the policies of the past two decades — policies based on the assumption that engagement with rivals and their inclusion in international institutions and global commerce would turn them into benign actors and trustworthy partners,” the document continues. “For the most part, this premise turned out to be false.”

While Obama’s two national security strategies emphasized cooperation with allies and economic partners, Trump’s attempts to walk the line between his campaign slogan of “America First” and an insistence that he is not rejecting working with U.S. partners — as long as they do so on terms advantageous to the United States.

Moreover, Trump’s strategy contains more than a few hints of a return to a Cold War view of the world. While Obama used his strategies to de-emphasize nuclear weapons as a key to U.S. defense, Trump calls those weapons “the foundation of our strategy to preserve peace and stability by deterring aggression against the United States, our allies and our partners.”

The national security strategies of past administrations were sometimes strong predictors of future action: It was Bush’s strategy, in 2002, that revived a national debate about the justifications for pre-emptive military action. That document helped form the rationale for the invasion of Iraq six months later, arguing that the risks of inaction in the face of a major threat made “a compelling case for taking anticipatory actions to defend ourselves.”

The new strategy never uses the word “pre-emption,” including in its discussion of North Korea. This omission comes despite the fact that Trump’s national security adviser, Lt. Gen. H.R. McMaster, has said that if diplomacy and sanctions fail, “preventive war,” or a pre-emptive strike, might be needed to keep the North from attacking the United States.

Administration officials, previewing the document, also noted it refers to China as a “strategic competitor.” That is a radical shift from the language that the Obama administration used toward Beijing, which Obama viewed as a partner in confronting global threats, from Iran’s nuclear program to climate change.

Bush used the phrase “strategic competitor” in reference to China when he ran for the White House in 2000, drawing a contrast with Bill Clinton, who liked to refer to China as a “strategic partner.” The Trump administration’s language suggests the United States will push back robustly on China’s state-driven economic practices and expansionist claims in the South China Sea.

Trump has tried working with China to curb North Korea’s nuclear and missile programs, even setting aside his “America First” trade agenda in an effort to persuade President Xi Jinping to put more economic pressure on the regime of Kim Jong Un.

But the strategy outlined in the document suggests a return to his campaign promises, and states explicitly that “the United States will no longer turn a blind eye to violations, cheating or economic aggression.”

Another section refers to preserving the “national security innovation base,” at a moment the administration is considering steps to keep China from investing in promising U.S. technology.

In another shift from his predecessor, Trump’s strategy does not recognize the changing climate as a threat to national security. The document instead places climate under a section on embracing “energy dominance,” and says that while “climate policies will continue to shape the global energy system,” U.S. leadership will be “indispensable to countering an anti-growth energy agenda.” That puts it at odds with the Pentagon, which has continued to highlight national security threats from a changing climate, including refugee flows as a result of droughts and intensifying storms and the repercussions of rising sea waters.

The White House did not release the full strategy document on Sunday. But excerpts suggested that in some key areas, like the use of cyberattacks against the United States, the document will describe the problems facing the nation rather than prescribe solutions. It refers to cyber weapons as a new threat because they can strike “without ever physically crossing our borders.”

“Deterrence today is significantly more complex to achieve than during the Cold War,” the document reads, saying a mix of inexpensive weapons and “the use of cyber tools have allowed state and nonstate competitors to harm the United States across various domains.”

America’s adversaries have learned to “operate below the threshold of open military conflict and at the edges of international law,” it continues.

But the document deals with the subject at some remove, not dwelling on how Russia used cyber techniques in an attempt to interfere with the 2016 election. And it does nothing to describe any broad national strategy to guard against meddling in future elections.