MICHELLE GOLDBERG: Is Trump's misogyny catching up with him? 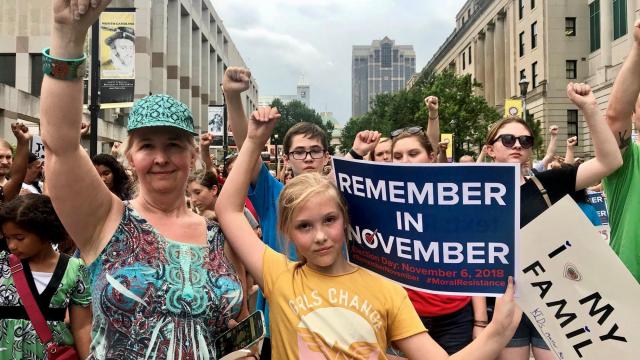 EDITOR'S NOTE: Michelle Goldberg is a New York Times columnist. She is the author of several books about politics, religion and women’s rights. She was part of a team that won a Pulitzer Prize for public service in 2018 for reporting on workplace sexual harassment issues.

Recently I had the chance to watch an online focus group of seven women from swing states who had voted for Donald Trump in 2016 but who had become disaffected with him. Convened by Sarah Longwell, a founder of Republican Voters Against Trump, the session was in some ways a deeply depressing experience. Several of the women said that, because they don’t believe what they hear from mainstream media, they have a hard time distinguishing truth from falsehood.  One woman, in North Carolina, cited something she’d heard in a Trump ad as a reason she’s unlikely to vote for Joe Biden, and said she wished Ben Carson would step into the race.  Another also from North Carolina said she was “scared” about the election because she doesn’t trust Kamala Harris.  A woman from Florida had already voted for Joe Biden, but a few of the others were considering voting third party.  Yet their disgust with the president was palpable.

A well-spoken woman with grown children from central Pennsylvania appeared to have mentally rewritten the history of the last election to justify her vote. She’d opted for Trump, she said, thinking that it would be “refreshing” to have a president with a business background. In her recollection, it was only after he won that he revealed his true character.  “His Twitter, his comments, things that he was recorded saying, his misogyny — I was just, like, horrified and embarrassed,” she said.

Looking back, she didn’t think she knew about the “Access Hollywood” tape before she voted: “I certainly hope that I didn’t, because it was a disgusting comment. I would think that had I known that might have given me pause.”  She’s now considering voting for the Libertarian candidate, Jo Jorgensen.

I strongly suspect she’s remembering wrong — the “Access Hollywood” story would have been very hard to miss in October 2016. But it’s telling that she can no longer quite imagine how she could have supported Trump after hearing him boast about his penchant for sexual assault.  It’s another tiny piece of evidence that 2020 could be the year Trump’s misogyny finally catches up with him.

Four years ago, many of us were counting on right-leaning women to deliver a decisive rebuke to Trump. Lots of journalists, myself included, wrote about the group Republican Women for Hillary. After the appearance of the “Access Hollywood” tape, female Republican governors and members of Congress were far more likely than their male peers to withdraw their endorsements. Katie Packer, deputy campaign manager of Mitt Romney’s 2012 bid, imagined a reckoning in her party after Trump’s loss.  “There’s going to have to be a denunciation of this guy,” she told me then.

Needless to say, there wasn’t. Most women did indeed vote for Hillary Clinton, but Trump won either a plurality or an outright majority of white women, enough to give him the presidency. There turned out to be far less of a political penalty for vulgar misogyny than some of us realized.

Four years later, it’s hard not to feel an unnerving sense of déjà vu. Once again, the polls show a potentially historic gender gap in the presidential election.  Journalists are reporting on all the women Trump has turned off. Last I checked, FiveThirtyEight gave Trump a 13% chance of victory, almost exactly the same odds he had three weeks before the election in 2016. For America to survive as a liberal democracy, this time has to be different. Is it?

Longwell, who has conducted around 50 focus groups over the last three years, most of them with women, believes it is. “I have seen these people moving away in real time,” she says of the participants’ relationship to Trump.  And “it dropped off a cliff right around COVID, plus economic downturn, plus George Floyd.”

As Longwell tells it, there were some Trump voters who turned on him almost immediately after the election, but many others who continued to support him despite disliking him personally. “They said he was a narcissist, said he was a bully, but they also don’t like Democrats, don’t like the media, don’t trust anything, and they were hanging in,” she said.

Then Trump’s incompetence came home. “Once the pandemic hit, once there were personal consequences for their lives, there was an absolute shift in how people talked about Donald Trump,” said Longwell.

She started hearing “a ton of pain” in the focus groups. Cancer survivors with suppressed immune systems feared leaving the house because people in their community wouldn’t wear masks. “Or they’ve got young kids that aren’t in school, or somebody in their family is furloughed, or they couldn’t go see their parent who died,” she said.

Women’s job losses due to COVID have been enormously disproportionate; in September alone, around 617,000 women 16 and over left the workforce, nearly eight times the number of men. They’ve borne the brunt of closed schools.  As Jessica Grose recently reported in The New York Times, the Pandemic Parenting Study, which is tracking over 100 Indiana mothers, has found growing marital strife over child care.

“Mothers blame themselves for these conflicts and feel responsible for reducing them, including by leaving the workforce, beginning use of antidepressants, or ignoring their own concerns about COVID-19,” said a recent paper drawing on the study’s data. None of this can be separated from the collapse in women’s support for Trump.

If Trump loses, it won’t be just because enough women recognize him as a deranged bigot. It will because he blighted too many of their lives. In the focus group, a Wisconsin woman introduced herself as a full-time mother who, “on top of being at home,” now has to be a full-time teacher.  One of her kids is gravely ill, and people who refuse to wear masks infuriate her.  “It drives me nuts, people who don’t do it just because they don’t want to,” she said.

She tries to avoid almost all political news, and doesn’t trust what she does come across. Where she lives, she said, she hasn’t seen a single Biden sign, and she knows very little about the former vice president.  But she’s planning to vote for him.

If women defeat Trump next month, it will be because of everything he’s done to defeat them first.