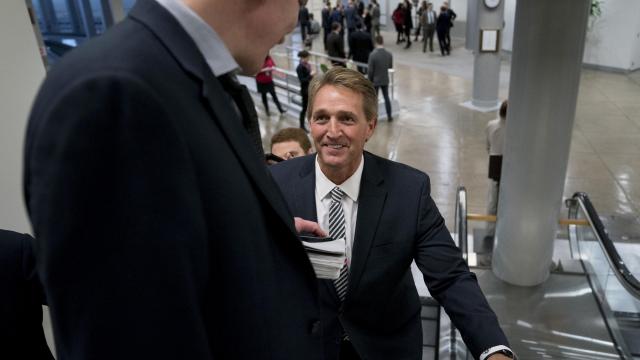 WASHINGTON — The Senate narrowly confirmed Jonathan Kobes as a federal appeals court judge Tuesday even as the American Bar Association questioned his understanding of “complex legal analysis” and “knowledge of the law.”

Kobes, a 44-year-old aide to Sen. Mike Rounds, R-S.D., is the second of President Donald Trump’s judicial nominees to be confirmed whom the bar association had deemed unqualified.

A number of other Trump nominees have raised concerns, including five who also received the unqualified rating. Others were rated as qualified but carried with them politically or racially insensitive remarks from their past that resurfaced during their confirmations. One wrote in an online forum that the nation’s commitment to diversity was tantamount to accepting “lower standards.”

To the chagrin of even some Republicans, their confirmation hearings have thrust politically sensitive topics into the spotlight at a time when the party is wrestling with issues of race and governing competence.Despite the controversies, they have all won the backing of most Republican senators, revealing how far they are willing to push the boundaries in their drive to reshape the judiciary as a conservative bastion.

The judicial renaissance, led by Sen. Mitch McConnell of Kentucky, the majority leader, has energized a party wowed by the number of judges placed on the federal bench — two have risen to the Supreme Court and 30 will have made it to appeals courts by the end of the year. McConnell has come to define his legacy by his ability to transform the judiciary, calling the confirmations “the most significant, long-term contribution we are making to the country” in an interview with a Kentucky radio station last week.

The nominees are deeply conservative and often white, young and male. Kobes has worked for Rounds since 2014. He worked as an assistant U.S. attorney in South Dakota for two years, then as counsel for two agriculture companies. He has tried six cases in his career, for assault and intent to distribute drugs, for instance, which the bar association considered straightforward and not legally complex.

Sen. Dianne Feinstein of California, the ranking Democrat on the Judiciary Committee, blistered the Kobes nomination. “He’s never been a judge, has tried only SIX cases, and has argued only ONE appeal — 15 years ago,” she wrote on Twitter. “Kobes has filed briefs in only two appeals, yet he’s been nominated to serve on an appellate court where he would write dozens of opinions a year. Circuit courts are where most Americans receive final justice. They deserve to have qualified, experienced judges presiding.”

In other cases, the nominees have carried vaunted résumés and commendations from their home-state senators, and in the spirit of bipartisanship, several of the district court nominees were first selected by President Barack Obama. For the most part, those nominees have passed through the Senate (though often along party-line votes) with the ministerial ease once expected for judicial confirmations.

But others have created major headaches for Republicans, spurring outcries from their own — most notably the typically media-averse Tim Scott of South Carolina, the Senate’s lone black Republican.

“We should stop bringing candidates with questionable track records on race before the full Senate for a vote,” Scott wrote in an Op-Ed for The Wall Street Journal last week.

So far, three nominees, Thomas Farr, Ryan W. Bounds and Brett Talley, have been derailed over concerns about their roles in racially divisive writings or actions. Farr defended a North Carolina voter identification law and a partisan gerrymander that a federal court said was drafted to suppress black votes “with surgical precision.” In college, Bounds railed against “race-focused groups” on campus and “race-think.”

Talley, who dabbled in ghost hunting, was forced to withdraw his nomination after a 2011 message-board post surfaced in which he defended an early leader of the Ku Klux Klan.

Though Talley never forced a vote, Farr and Bounds made it through to the Senate floor until Scott, the last undecided vote, announced he would not vote to confirm them.

Gordon Giampietro, 53, another district court nominee, wrote that “calls for diversity” amounted to “code for relaxed standards (moral and intellectual)” in a 2014 comment on a blog post on a Catholic forum, as first reported by BuzzFeed News. Giampietro’s hearing before the Senate Judiciary Committee has so far been blocked by the lack of support from his home-state senator, Sen. Tammy Baldwin, D-Wis.

Still others have taken incendiary positions on transgender rights. Jeff Mateer, a district court nominee who was later dropped, described transgender children as evidence of “Satan’s plan." Mateer and another district court nominee, Matthew Kacsmaryk, wrote a brief to the Department of Health and Human Services that sought to roll back civil rights protections for transgender people, citing a scientist at Johns Hopkins University who argued that the “sense of being transgendered constitutes a mental disorder.” Advanced by the Judiciary Committee, Kacsmaryk is waiting for the full Senate to take up his nomination. Some conservatives have characterized the attacks on the nominees as overblown and partisan. Sen. Orrin G. Hatch of Utah described criticism of Farr as “character assassination” and “what we’ve come to expect” from liberals on judicial nominations, although the most effective critiques came from Scott. Carrie Severino, the chief counsel and policy director of the Judicial Crisis Network, an advocacy group pressing for conservative judicial confirmations, described Scott’s opposition to the judge as “a capitulation to political correctness bordering on slander.”

“It’s bad enough when liberals attack highly qualified conservatives and create false narratives,” Severino said. “It’s far worse when conservative senators cave in to such pressure as it stains the careers of good men and women and never satisfies the liberal forces that consistently seek to destroy them.”

“We’ve lost a couple who have become controversial, but you know we’ve approved 99 percent of the judges that have been set up,” McConnell told the Kentucky radio station Friday. “I think that by and largely the administration has done a good job of vetting judges before they’ve come up.”

“I don’t think it’s that we have judges that have such different backgrounds. It’s that we’re going over their records with much greater scrutiny, and we’re able to obtain more information” because of social media, he said. “Both parties now are a lot less willing to give nominees the benefit of the doubt.”

But the selection of more contentious nominees has befuddled others within the party. Scott told reporters this month, “There are a lot of folks that can be judges, in states including North Carolina, besides Tom Farr.”

“This is now the second time a racially sensitive subject is hoisted upon us to consider at the last second," Rubio said of Farr’s nomination. He added, “When you have questions like this, it’s going to lead to more questions.” Sen. Jeff Flake, a retiring Republican from Arizona, said the party is “writing ourselves into irrelevancy if we don’t appeal to a broader electorate.”

Senate Democrats, newly energized and hungry for a fight over the courts, have seized on the nominations, delivering a steady stream of jabs on social media and at the leadership’s weekly news conference. Liberal advocacy group Demand Justice targeted senators up for re-election in 2020 in the days leading up to Farr’s vote, deluging their offices with calls and buying digital and radio ads.

“If the administration is already vulnerable to this issue because of some of the comments the president has made, that also might be a reason you think the administration might try to take actions to pre-empt those kinds of attacks,” Adler said. “And it hasn’t.”