Trump’s Expected Meeting With Putin to Be Delayed 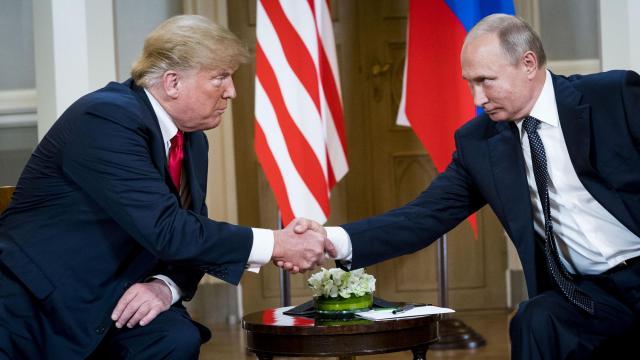 CAPE GIRARDEAU, Mo. — President Donald Trump said Monday that a meeting with President Vladimir Putin of Russia expected to take place this weekend in Paris will be delayed, possibly until later in the month when both are planning to attend an international summit in Buenos Aires, Argentina.

Trump sent his national security adviser, John R. Bolton, to Moscow last month to discuss the Paris meeting, but in response to reporters Monday, the president said the two leaders would probably not sit down with each other until the annual meeting of the leaders of the Group of 20 major nations.

“Well, we haven’t set anything up yet,” Trump said before leaving Washington for a last day of campaigning in Ohio, Indiana and Missouri before Tuesday’s midterm elections. “We don’t know that that’s going to be the right place. I’m going to be in Paris for other reasons. But we will be meeting at the G-20. And probably we’ll have meetings after that — probably plenty of meetings.”

“Getting along with Russia, China and all of them would be a good thing,” he added. “I’ve said it for a long time. So we’ll have plenty of meetings. But I’m not sure that we’ll have a meeting in Paris — probably not.”

The change in schedule came at a time of tension between Washington and Moscow over the fate of the Intermediate-Range Nuclear Forces Treaty signed by President Ronald Reagan and Mikhail S. Gorbachev in 1987 that eliminated an entire class of weapons in the nuclear stockpiles of the two Cold War adversaries. Trump has indicated that he will withdraw the United States from the treaty after multiple reports of violations by Russia.

Trump gave no explanation Monday for scrapping the Paris meeting, but a Kremlin spokesman said the schedule of events this weekend did not allow for a full-fledged discussion. The two presidents are joining heads of state from around the world in Paris to mark the 100th anniversary of the end of World War I on Sunday.

“Putin and Trump will be able to cross paths and decide when they will meet in full format,” the Kremlin spokesman, Dmitri Peskov, told the Russian news agency Interfax.

This was the second change to Trump’s schedule for the weekend trip to Europe. He was originally also supposed to visit Ireland but canceled that stop. Similarly, last week he scrapped a planned trip to Colombia while in South America for the G-20 summit.