Trump’s Birthright Citizenship Proposal Is at Odds With Legal Consensus 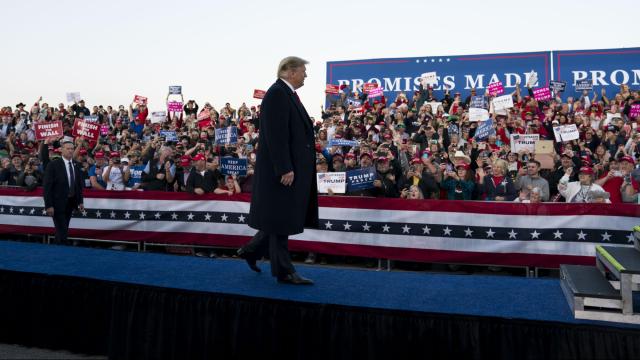 WASHINGTON — The words of the 14th Amendment are plain, and the scholarly and judicial consensus about what they mean is nearly uniform: Children born in the United States automatically become citizens of the United States.

In an interview released Tuesday, President Donald Trump proposed a different reading of the amendment, one he said denies birthright citizenship to the children of undocumented immigrants. Trump said he was preparing to issue an executive order to that end.

The statement sounded more like a political stunt than a reasoned legal argument, and its timing, coming a week before the midterm elections, was suspect. Nor was it clear what the executive order would say, or how it could change the meaning of the Constitution.

But there was little question that any action by Trump to try to alter birthright citizenship would be met with immediate legal challenges.

“The president cannot erase the Constitution with an executive order, and the 14th Amendment’s citizenship guarantee is clear,” said Omar Jadwat, the director of the American Civil Liberties Union’s Immigrants’ Rights Project. “This is a transparent and blatantly unconstitutional attempt to sow division and fan the flames of anti-immigrant hatred in the days ahead of the midterms.”

The citizenship clause of the 14th Amendment, ratified in the aftermath of the Civil War, says: “All persons born or naturalized in the United States, and subject to the jurisdiction thereof, are citizens of the United States and of the State wherein they reside.”

The meaning of that clause is plain, said Peter J. Spiro, a law professor at Temple University. “The conventional understanding is absolutely clear that children born in the United States are citizens of the United States, with the insignificant exception of the children of diplomats,” he said.

A main purpose of the clause was to overrule Dred Scott, the shameful 1857 Supreme Court decision that said black slaves were property and not citizens. The decision said the Constitution barred Congress and the states from granting citizenship to the descendants of slaves. The Dred Scott decision helped prompt the Civil War.

“In its most monumentally erroneous decision, the Supreme Court created a monstrous exception to the common law rule that birth on American soil to a free person was sufficient for American citizenship,” Walter Dellinger, then the head of the Justice Department’s Office of Legal Counsel, said in congressional testimony in 1995. “The court held that no persons of African descent — including free persons of African descent — and none of their descendants for all time to come could ever be citizens of the United States regardless of their birth in America.”

In congressional debates about the 14th Amendment in 1866, lawmakers said its sweep should be wide.

“Is the child of the Chinese immigrant in California a citizen?” Sen. Edgar Cowan of Pennsylvania asked on the Senate floor.

Sen. John Conness of California said the answer was yes.

“The children of all parentage whatever, born in California, should be regarded and treated as citizens of the United States, entitled to equal civil rights with other citizens,” Conness said.

The Supreme Court confirmed that understanding in 1898 in United States v. Wong Kim Ark, ruling that a child born in San Francisco to Chinese parents was a U.S. citizen, even though the parents were prohibited by the Chinese Exclusion Act from ever becoming citizens.

“To hold that the 14th Amendment of the Constitution excludes from citizenship the children, born in the United States, of citizens or subjects of other countries,” the court said, “would be to deny citizenship to thousands of persons of English, Scotch, Irish, German, or other European parentage who have always been considered and treated as citizens of the United States.”

James C. Ho, a conservative legal scholar recently appointed by Trump to the federal appeals court in New Orleans, has written that the message of the decision is unmistakable. “This sweeping language reaches all aliens regardless of immigration status,” he wrote in 2006.

The 1898 decision did not specifically discuss unauthorized immigrants. But in 1982, in Plyler v. Doe, the Supreme Court ruled that undocumented children were entitled to free public education. The court relied on another part of the 14th amendment, its equal protection clause, and it interpreted language similar to that in the citizenship clause.

“Although the court splintered over the specific question of public education,” Ho wrote, “all nine justices agreed that the Equal Protection Clause protects legal and illegal aliens alike. And all nine reached that conclusion precisely because illegal aliens are ‘subject to the jurisdiction’ of the U.S., no less than legal aliens and U.S. citizens.”

In asides in later decisions, too, the Supreme Court has assumed that the children of unauthorized immigrants born in the United States are citizens.

Trump did not say whether his executive order would attempt to apply his understanding of the 14th Amendment retroactively. Revoking citizenship, the Supreme Court has said, poses special concerns.

“The very nature of our free government makes it completely incongruous to have a rule of law under which a group of citizens temporarily in office can deprive another group of citizens of their citizenship,” the court said in Afroyim v. Rusk, a 1967 decision that struck down a federal law canceling the citizenship of people who voted in foreign elections.

“We hold that the 14th Amendment was designed to, and does, protect every citizen of this nation against a congressional forcible destruction of his citizenship, whatever his creed, color, or race,” the court said. “Our holding does no more than to give to this citizen that which is his own, a constitutional right to remain a citizen in a free country unless he voluntarily relinquishes that citizenship.”

There may be good policy arguments for doing away with birthright citizenship, but most legal scholars say it would take a constitutional amendment to do so. In his 1995 testimony, Dellinger said that a federal statute would not do, meaning that the executive order discussed by Trump would certainly not suffice.

“Because the rule of citizenship acquired by birth within the United States is the law of the Constitution, it cannot be changed through legislation, but only by amending the Constitution,” he said.

He added that history has lessons to teach. “From our experience with Dred Scott,” Dellinger said, “we had learned that our country should never again trust to judges or politicians the power to deprive from a class born on our soil the right of citizenship.”