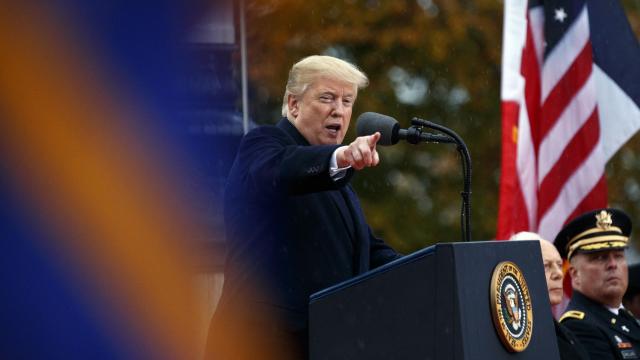 WASHINGTON — President Donald Trump, fresh off an international display of unity among global leaders to mark the end of World War I, renewed his attacks on the United States’ longtime allies Monday and demanded fair treatment for the United States.

In a trio of Twitter posts, Trump said that the United States pays “for LARGE portions” of other countries’ military protection and loses money on trade with the same countries. Trump has frequently criticized what he asserts are the unbalanced costs of the North Atlantic Treaty Organization, the military alliance whose core includes mutual defense.

Wasting little time after the midterm elections, held just six days earlier, Trump renewed one of his favorite campaign topics — the “unfair” position of the United States in the NATO alliance — without even mentioning the name of the alliance. But the complaint, a familiar rallying cry for his political base, serves as a reminder that his campaign to win re-election in 2020 is well underway.

The president also renewed his complaint about the trade deficit, saying that trade between the United States and Europe “must be FREE and FAIR!”

His comments come as Europe’s chief trade negotiator, Cecilia Malmstrom, heads to Washington this week to meet with Robert Lighthizer, the U.S. trade representative. The United States and Europe have been engaged in a tit-for-tat tariff war, as Trump imposed tariffs on European steel and aluminum and the bloc retaliated with tariffs on American products like peanut butter, orange juice and whiskey. Trump has repeatedly threatened to impose tariffs on European cars and car parts if the bloc does not agree to U.S. trade demands.

Hopes that the United States and Europe could quickly make substantive progress to resolve disputes on industrial goods, steel tariffs or cars have largely evaporated. Instead, Malmstrom will be on a mission to try to secure some modest wins, including gaining greater access to the U.S. agricultural market, including selling shellfish in the United States, and brokering a deal around pharmaceuticals.

The European pharmaceutical industry is pushing for the United States to recognize clinical trials of new drugs conducted in Europe and vice versa. That would cut the cost of testing a new drug by millions of dollars and help hold down prices for prescription medicines.

Brussels trade negotiators hope that “as long as there is constructive work toward a stronger future trade relationship, the United States will withhold the urge to impose further tariffs,” said Koen Berden, a trade expert at the European Federation of Pharmaceutical Industries and Associations.

“They to want to show to Trump that we are serious and we want this to work,” Berden said in an interview Monday.

But the proposals under discussion fall well short of the “new phase in the relationship between the United States and the European Union” that Trump and Jean-Claude Juncker, the president of the European Commission, described after a meeting at the White House in July.

The meeting in Washington on Wednesday will be the second between Lighthizer and Malmstrom since July, and her first trip to Washington. Members of their staffs have met more frequently. They have focused on regulations, which are often a more serious impediment to trade than tariffs.

As for the trade deficits, most economists do not see any gap as money “lost” to other countries and do not agree with the president’s view that the trade imbalance shows the United States’ weakness on trade policy.

On Sunday, President Emmanuel Macron of France criticized Trump’s nationalistic posture in his remarks at the commemorative event at the Arc de Triomphe in Paris.

“Nationalism is a betrayal of patriotism by saying: ‘Our interest first. Who cares about the others,'” Macron said.

Trump called himself a nationalist last month during a campaign rally in Houston and was met with applause. He also talked about his demands that NATO countries “pay up.”

“We’re protecting them and that’s great,” Trump said to a cheering crowd, “but they got to pay.”