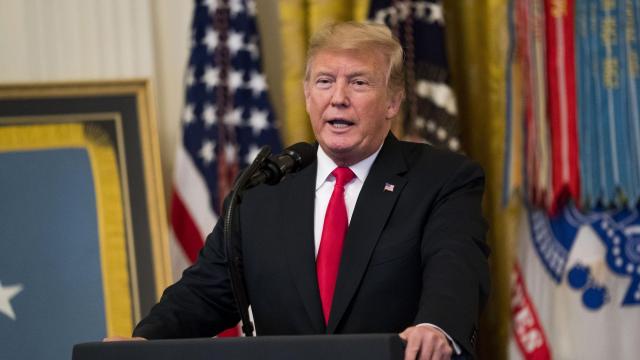 The fresh round of tariffs comes on top of $50 billion worth of Chinese products taxed this year, meaning nearly half of all Chinese imports into the United States will soon face tariffs. The new wave is scheduled to go into effect Sept. 24, with tariffs starting at 10 percent before climbing to 25 percent by the end of the year. The timing will partially reduce the toll of price increases for holiday shoppers buying Chinese imports in the coming months.

The White House also said the United States was prepared to “immediately” place tariffs on another $267 billion worth of imports “if China takes retaliatory action against our farmers or other industries.”

The move is aimed at pressuring China to change long-standing trade practices that Trump says are hurting U.S. businesses at a moment when the administration believes it has an advantage in the trade dispute. China’s economy is slowing, with consumers holding back and infrastructure spending dropping sharply. The Chinese slowdown is expected to worsen as the U.S. tariffs ramp up. The United States, by contrast, has continued to experience robust economic growth, including the lowest unemployment rate since 2000.

White House officials said Monday that China could win relief from the tariffs by acceding to the administration’s trade demands, including allowing U.S. companies greater access to the China market and dropping its requirement that U.S. companies hand over valuable technology to Chinese partners. Officials said the United States would continue trade negotiations only if the Chinese were “serious” about giving ground on those issues.

But while the tariffs are aimed at hurting China, they could hamper the U.S. economy and bring pain for consumers. Unlike the first round of tariffs, which were designed to minimize the impact on U.S. consumers, this wave could raise prices on everyday products including electronics, food, tools and housewares.

Retailers, manufacturers and a wide swath of other U.S. businesses have warned that the new tariffs could hurt their profits, hiring and growth. The administration held six days of public hearings on the proposed $200 billion round of tariffs in August, which were dominated by companies warning that the United States no longer had the capacity to produce replacement products for the Chinese imports that would be hit by tariffs.

Economists warn the tariffs could chip away at economic growth in the United States. Morgan Stanley researchers estimate that the latest round could reduce economic growth in the United States this year by 0.1 percentage point, adding to another 0.1 percentage-point drag from tariffs currently in place. And the effects are likely to grow if China retaliates again, as it has threatened to do. The administration did remove roughly 300 product lines — and some individual products — from the list after companies objected. Among the items dropped are smartwatches, Bluetooth devices, bike helmets, plastic gloves, high chairs, play pens and certain chemicals. But, in some cases, partial product lines will be taxed while other parts are not. For example, high tech network routers and smartwatches share a product line, but under the U.S. trade representative plan, the routers would be subject to tariffs while watches are not.

Still, the tariffs will affect a significant swath of industries, driving up prices for materials and goods and requiring many industries to find new suppliers, raise prices or cut jobs, and business groups reacted swiftly and angrily to the announcement.

Trump’s decision is a significant escalation of an already serious trade dispute between the world’s two largest economies — one with seemingly no end in sight. After months of failed trade talks, top officials from China and the United States were tentatively scheduled to talk this month in Washington. But it is unclear whether Beijing will agree to come to Washington with the new tariffs set to go into effect.

“We are open to talk if there are serious talks,” Larry Kudlow, director of the National Economic Council, said Monday.

Yang Weimin, deputy director for economic affairs at the Communist Party’s top advisory body, said at the China Development Forum in Beijing on Sunday that China would not negotiate while under pressure. Trade analysts said Trump’s approach risks further confrontation with the Chinese.

“Washington’s view seems to be that tariffs and threats of more tariffs will soften up the Chinese and make them more amenable to negotiations,” said Eswar Prasad, a Cornell University economist who specializes in trade issues. “The evidence that, in response to U.S. bullying tactics, China just stiffens its spine and strikes back with proportionate tariffs against U.S. imports has had no discernible effect on the Trump administration’s take-no-prisoners approach to this rapidly escalating trade war.”

China is expected to further retaliate against the United States, and top officials have warned that could include penalizing U.S. companies that rely on Chinese components for phones, cars, televisions and other products. China’s Commerce Ministry has said that it is ready to put similar tariffs on $60 billion a year of U.S. goods in response to the threat from the United States. China has matched previous tariff moves dollar for dollar, but the number of U.S. goods to tax is dwindling because, for many years, it has imported only about a quarter as much as it exports to the United States. Lou Jiwei, China’s finance minister until his recent retirement and now a senior Communist Party adviser, delivered an unexpectedly strong threat to the United States in a lunch speech at the Development Forum, which is organized by a government agency reporting directly to the Cabinet. Lou said that, if necessary in the trade war, China could halt exports to the United States of components that are crucial to U.S. companies’ supply chains.

Lou said it would take years for U.S. companies to find alternatives to China. “To take a step back, the United States can establish an alternative supply chain in a third country, but it takes time — what about the pain of three to five years? This is enough to cross a political cycle,” he said.

U.S. businesses — which have warned that tariffs could hurt profits, force job cuts and, in some cases, destroy companies, said the taxes were going to hurt the United States more than the administration realized. The National Association of Chemical Distributors released a study this month that predicted nearly 28,000 chemical distributor and supplier jobs would be eliminated because of higher prices from the $200 billion round of tariffs.

“These tariffs are going to be paid for by the working families who drive our economy,” said Jonathan Gold, a spokesman for a business group formed to fight tariffs called Tariffs Hurt the Heartland. “Tariffs are taxes, plain and simple. By choosing to unilaterally raise taxes on Americans, the cost of running a farm, factory or business will grow. In many cases, these costs will be passed on to American families.”

The total wave of tariffs thus far has not been large enough to meaningfully affect consumer prices broadly across the economy — only narrowly, for certain products. Economists warn that the effects could grow noticeably larger if Trump follows through with his threat to subject nearly all Chinese imports to tariffs. Asked about Trump’s tweets in the morning, regarding the lack of price impacts across the economy from tariffs, Kudlow stuck with the president. “With respect to the impact of tariffs, we’ll see,” he said. “We’re following it. We don’t see any problems so far.”

“I don’t see any reason to believe at the present time that the president’s trade reforms are going to damage the economy.”

The Trump administration has demanded steep cuts in Chinese tariffs and investment restrictions but has particularly focused on stopping the Chinese industrial policy initiative known as Made in China 2025.

Chinese policymakers have long said that they are willing to cut tariffs in particular, but want concessions from the United States, such as curbs on the Commerce Department’s ability to impose steep tariffs on imported goods that are government subsidized or are dumped below the cost of producing them. The United States has long refused, under the Obama administration and now under the Trump administration, contending that the U.S. market is so open that further concessions are not needed.

As for Made in China 2025, Chinese officials dismiss its importance. “We do not think this is such an important strategy for us or our industries,” said Wang Yiming, a vice president of the Chinese cabinet’s Development Research Center.

Chinese officials have expressed a willingness to get rid of the Made in China 2025 name, but they have been much more cautious about accepting limits on some of the key features of Chinese industrial policy, such as enormous loans from state-owned banks at very low interest rates to favored industries.