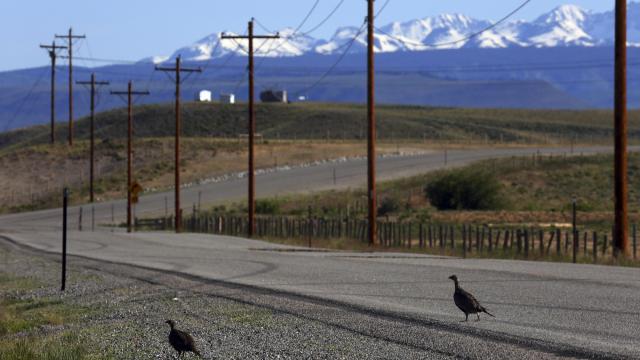 WASHINGTON — The Trump administration on Thursday detailed its plan to open 9 million acres to drilling and mining by stripping away protections for the sage grouse, an imperiled ground-nesting bird that oil companies have long considered an obstacle to some of the richest deposits in the American West.

In one stroke, the action will open more land to drilling than any other step taken by the administration to date, environmental policy experts said. It drew immediate criticism from environmentalists while energy-industry representatives praised the move, saying that the earlier policy represented an overreach of federal authority.

“This is millions and millions of acres of western land that stretch across the spine of this nation,” said Bobby McEnaney, an expert in western land use at the Natural Resources Defense Council, an advocacy group. “With this single action, the administration is saying, this landscape doesn’t matter. This species doesn’t matter. Oil and gas matter.”

Kathleen Sgamma, president of the Western Energy Alliance, an association of independent oil and gas companies based in Denver, said in an email, “These plans will conserve the sage grouse without needlessly stifling economic activity.”

The plan is the latest in a series designed to spark more oil and gas drilling on public land in support of what Trump has called a policy of American “energy dominance.” Last December, Trump signed a law that opened the vast Arctic National Wildlife Refuge to oil and gas exploration, and the administration has since moved with unprecedented speed to allow exploratory work to begin there. In January, the Interior Department proposed opening up almost the entire U.S. coastline to offshore drilling.

Also in December, the administration slashed the size of two major national monuments in Utah, reducing Bears Ears, a sprawling region of red rock canyons, by 85 percent, and Grand Staircase-Escalante to about half its former size, with the intent of opening the land to drilling and mining. But that move opened up only 2 million acres, compared to the 9 million acres in the sage grouse decision.

The opening of great swaths of land and water to drilling could become tough to reverse once companies start leasing the land or sinking rigs into the ground, said Patrick Parenteau, a professor of environmental law at Vermont Law School. “It’s a major step. It’s practically irreversible, once you have the commitment of these lands to industrial uses.”

In reducing protections for the sage grouse, which has been a candidate for endangered-species protection in the past and has habitat in 10 oil-rich Western states, the government would be freeing up land that oil and gas companies have long thirsted after.

Under a plan put forth in 2015 during the Obama administration, oil and gas drilling was banned or limited in 10.7 million acres where the bird lives. Known for its distinctive mating dance, the land-dwelling grouse has seen its numbers sharply decline in recent decades.

In cases where drilling was permitted in the habitat, it came with restrictions such as bans on drilling during mating season. The Obama plan also limited construction of drilling infrastructure, such as pipelines and roads, in sage grouse habitat and also required companies that did drill in restricted areas to pay into a fund to preserve and protect other habitat areas.

The new Trump proposal, which is expected to be finalized next year, would limit the protected area to just 1.8 million acres and eliminate the requirement that companies pay into the habitat preservation fund, although the fund will continue to exist and companies can pay into it on a voluntary basis.

A spokeswoman for Interior Department’s Bureau of Land Management, which published the proposal, said that the new plan would not strip away all protections of sage grouse habitat. It would remove from the 9 million acres a blanket ban on destroying grouse habitat by eliminating a designation, “sagebrush focal areas,” which includes that ban, but she said it would leave other conservation measures in place.

“Taking away the ‘sagebrush focal area’ protection would be removing just one of multiple layers of protection,” said the spokeswoman, Heather Feeney. For example, there would still be buffer zones banning the destruction of sage grouse habitat near nests, and drilling and mining companies would have to apply for waivers to destroy habitat.

However, environmentalists said that change amounts to a major weakening of environmental protections, and noted that it might be relatively easy for companies to receive the drilling waivers from an administration that is actively promoting new drilling.

“It’s true that there are still some conservation measures in place,” said Nada Culver, a lawyer with The Wilderness Society. “But now, if a company says, ‘I don’t want to comply with those protections,’ then the Interior Department can give just them a permit that says, ‘Go ahead, you’re allowed to destroy the habitat.'”

Interior Secretary Ryan Zinke, who will implement the revised sage grouse plan, has repeatedly said that the new plans will not harm the bird. “No one loves the sage grouse more than I do,” Zinke said in response to a question last summer. Environmentalists have dismissed that claim, calling the rollback of the sage grouse protections a gift to the oil and gas industry. “It’s hard to pretend at this point that Zinke is a steward of America’s public lands,” said McEnaney.

Experts on endangered birds also criticized the proposal’s scientific underpinnings, echoing a criticism of the Trump administration’s approach toward the use of data and research in policy proposals. “Today’s announcement is not based on any new science that changes the picture of what biologists regard as absolutely necessary to keep sage grouse off the Endangered Species list,” said John W. Fitzpatrick, director of the Cornell Lab of Ornithology. “The Department of Interior is disregarding its own best available science.”

Government watchdog groups were critical of the role played by Zinke’s deputy secretary, David Bernhardt, in crafting the sage grouse plan. People familiar with the yearlong process say that much of the substantive work was performed by Bernhardt, a former oil lobbyist. Since his confirmation to his position last year, Bernhardt has attracted criticism that his work creates a conflict of interest, given that he oversees proposals that could directly benefit his former clients.

As a partner in the law firm Brownstein Hyatt Farber Schreck, Bernhardt lobbied for the oil companies Cobalt International Energy and Samson Resources. His legal clients have included the Independent Petroleum Association of America and Halliburton Energy Services, the oil-and-gas extraction firm once led by former Vice President Dick Cheney. In March, a group of oil companies including his former client the Independent Petroleum Association of America wrote to Bernhardt to thank him for his work on a series of actions “that rescinded and revised mitigation policies that far exceeded statutory authority.” The groups also listed policies that they hoped Bernhardt would change, including the Obama sage grouse plan.

However, O’Neill and others acknowledge that since the loosened environmental restrictions will likely benefit hundreds of companies and numerous industries — not just Bernhard’s former clients — it is difficult to claim that he was acting with the specific intent to help the former clients.

Sheehey, the spokeswoman for the Interior Department, declined to make Bernhardt available for an interview.

In a statement released Thursday, Bernhardt said, “We know the successful conservation of the greater sage grouse requires the shared stewardship vision of the states, private citizens, landowners and federal land management agencies including those within the Department of the Interior.”

Some environmentalists pointed out that there is one scenario where the Trump administration’s actions could have the unintended consequence, in the long term, of actually making drilling more difficult on sage grouse habitat: If the population declines so much that the bird gets listed on the Endangered Species List.

“It’s ironic,” said Mark Squillace, an expert on environmental law at the University of Colorado Law School. “If the species is listed, it will trigger all kinds of federal actions.”