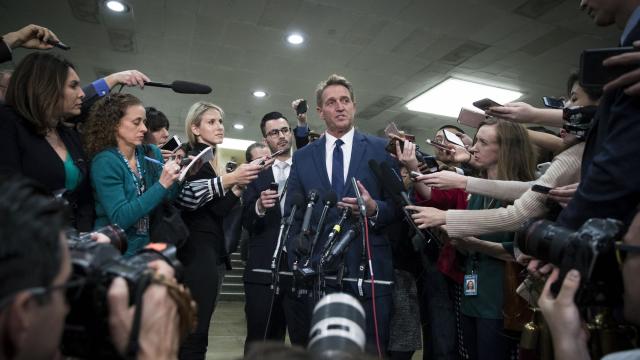 WASHINGTON — Furious over being denied a CIA briefing on the killing of a Saudi journalist, senators from both parties spurned the Trump administration on Wednesday with a stinging vote to consider ending U.S. military support for the Saudi-backed war in Yemen.

The Senate voted 63-37 to bring to the floor a measure to limit presidential war powers in Yemen. It was the strongest signal yet that Republican and Democratic senators alike remain vehemently skeptical of the administration’s insistence that the Saudi crown prince cannot, with certainty, be blamed for the death of the journalist Jamal Khashoggi.

While the vote showed widespread disapproval of the administration’s stance, it did not necessarily indicate that the measure will ultimately be approved.

It took place hours after Secretary of State Mike Pompeo and Defense Secretary Jim Mattis briefed senators about the Yemen conflict in a classified discussion, which the administration had hoped would convince lawmakers that Saudi Arabia must remain a vital American ally.

But many senators had insisted that Gina Haspel, the CIA director, also be there to answer questions about Khashoggi’s death. U.S. officials have said the CIA — which Pompeo led until the spring — has concluded that the Saudi crown prince, Mohammed bin Salman, ordered the killing in the Saudi Consulate in Istanbul last month.

“I’m talking about any key vote. Anything that you need me for to get out of town, I ain’t doing it until we hear from the CIA,” Graham told reporters after the 90-minute briefing at the Capitol.

He also promised there would “be no business as usual with Saudi Arabia” if U.S. intelligence confirmed that Crown Prince Mohammed was involved in Khashoggi’s killing. One U.S. official said that was precisely why the administration did not want Haspel to participate in the briefing.

The CIA’s press secretary, Timothy Barrett, denied that Haspel was blocked from attending, and noted that agency officials had already discussed its findings with the Senate Intelligence Committee and congressional leaders.

The vote was striking for its defections by Republicans who in the past had supported the yearslong military alliance between the United States and Saudi Arabia. As part of the Saudi-led coalition against Houthi rebels in Yemen, which began with a bombing campaign in 2015, the Pentagon is mostly providing military advisers and intelligence. Graham initially rejected Wednesday’s measure to withdraw aid, then huddled with colleagues and switched his vote. Thirteen other Republicans joined all Senate Democrats to end U.S. military action in Yemen — with the exception of operations against al-Qaida.

A similar measure in March was rejected by the Senate, with only 44 votes in support.

Sen. Bob Corker, R-Tenn., the retiring chairman of the Foreign Relations Committee, said that he had previously backed arms sales to the Saudis but was now in a different place. He estimated that 80 percent of the senators who attended Wednesday’s briefing left dissatisfied with the administration’s explanation about Khashoggi’s death.

Crown Prince Mohammed “has done nothing to show ownership over what has happened,” Corker said. “And that is an affront — not just to the American people, but it’s an affront to the world.”

After the briefing, Pompeo said there was “no direct reporting connecting the crown prince to the order to murder Jamal Khashoggi.” Separately, Mattis told reporters on the steps of the Pentagon that “we have no smoking gun the crown prince was involved.”

The war powers measure still faces several procedural hurdles before a final Senate vote. Even if it is approved, it is unlikely to pass the House before the congressional session concludes at the end of the year. It has a better chance in the House next year, when Democrats take over the majority.

The final vote in the Senate is likely to be scheduled for next week — giving the Trump administration time to win back Republicans and hold on to a Middle East strategy that has been largely built around a blossoming partnership with Crown Prince Mohammed. Bruce Riedel, a former CIA officer at the Brookings Institution, said Wednesday’s vote was one of the gravest threats to the alliance between Saudi Arabia and the United States in 75 years.

“This is an unprecedented setback for the Saudis and the Trump administration,” Riedel said.

Mattis and Pompeo had urged senators against withdrawing such support to the Saudis and warned that doing so could embolden Iran and endanger the United States. They also said the death of Khashoggi, a U.S. resident and Washington Post columnist, should not eclipse the crucial strategic relationship between the United States and Saudi Arabia.

“The October murder of Saudi national Jamal Khashoggi in Turkey has heightened the Capitol Hill caterwauling and media pile-on,” Pompeo wrote in an editorial published Tuesday evening in The Wall Street Journal. “But degrading U.S.-Saudi ties would be a grave mistake for the national security of the U.S. and its allies.”

Pompeo and Mattis have called for a cease-fire in Yemen. Although peace talks between the Saudi-led coalition and its Houthi rivals are scheduled for early December in Sweden, the two sides remain far apart.

Sen. Tim Kaine, D-Va., noted that the U.S. military’s role in the Saudi-led campaign in Yemen was never authorized by Congress.

“We sent an important message today — that Congress will stand up to Saudi leadership when the Trump administration won’t, and that Saudi Arabia will face consequences for the murder of Virginia resident Jamal Khashoggi as well as for the disastrous war in Yemen,” he said.

Sen. Rob Portman, R-Ohio, initially said the two Cabinet officials had helped persuade him to vote against the resolution to limit the American role in Yemen.

“Based on what they have said today in terms of the peace process, in other words a commitment to have peace talks, I think voting ‘yes’ would be bad timing,” he said.

But later in the day, even Portman voted to at least proceed with debate. Since the complex civil war ramped up in early 2015, an estimated 85,000 children in Yemen may have died of hunger and 14 million more people have been put on the brink of starvation. It also has evolved into a proxy war between Saudi Arabia and Iran, which has aided the Houthis.

The Saudi led-coalition has been widely criticized by the United Nations and human rights organizations for indiscriminate attacks — including against a wedding party and on a school bus that killed more than 40 children — and for failing to pay compensation to the victims.

Pompeo told senators that the kingdom was, in fact, following up on commitments to compensate victims and had “been responsive to international concern about the humanitarian situation” — including by donating relief funding.

But Sen. Mitch McConnell, R-Ky., the Senate majority leader, said concerns about the Saudis were justified.

“Senators on both sides of the aisle have legitimate concerns about the war in Yemen, the terrible humanitarian plight of Yemeni citizens caught in the crossfire, and the multiple U.S. interests wrapped up in this conflict,” McConnell said.

He also cited concerns “about the recent conduct of the Saudi government” from senators of both parties.

Sen. James Lankford, R-Okla., who sits on the Intelligence Committee, said that senators “are exceptionally frustrated with the administration’s response, and the lack of strong response toward Saudi Arabia with Khashoggi.”

But he noted that without American guidance to Saudi Arabia’s military, the war and ensuing humanitarian disaster in Yemen could become far more deadly.

“If we pull out of helping what’s happening, civilian casualties increase in Yemen absolutely,” Lankford said.