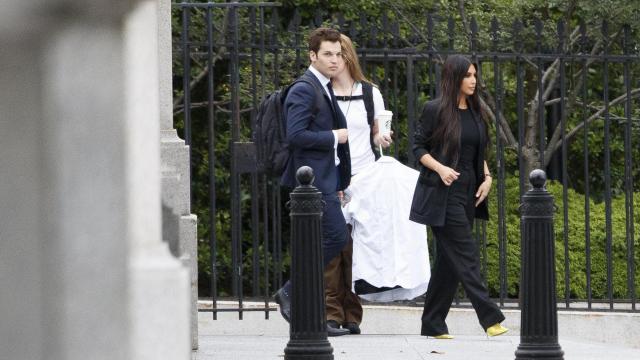 WASHINGTON — President Donald Trump commuted the sentence on Wednesday of a 63-year-old woman serving life in prison for a nonviolent drug conviction after her case was brought to his attention by reality television star Kim Kardashian West.

Although short of a full pardon, the decision will free Alice Marie Johnson, who has been locked up in federal prison in Alabama since 1996 on charges related to cocaine distribution and money laundering. Kardashian West, who learned of the case through a video that went viral on social media, visited Trump at the White House last week to lobby on Johnson’s behalf.

“While this administration will always be very tough on crime, it believes that those who have paid their debt to society and worked hard to better themselves while in prison deserve a second chance,” the White House said in a statement announcing the commutation.

Kardashian West celebrated the decision on Twitter. “BEST NEWS EVER!!!!” she wrote.

In an emailed statement, she thanked Trump and his son-in-law, Jared Kushner, for showing mercy to Johnson. “Her commutation and forthcoming release is inspirational and gives hope to so many others who are also deserving of a second chance,” Kardashian West said.

The president’s intervention was contrary to the policies his own Justice Department has enacted since he took office. Attorney General Jeff Sessions last year ordered federal prosecutors to pursue the toughest possible charges and sentences against criminal defendants, reversing President Barack Obama’s efforts to ease penalties in nonviolent drug cases.

The arguments advanced on Johnson’s behalf were essentially the same that were made for thousands of other nonviolent drug convicts whose petitions for presidential clemency have been languishing at the Justice Department without action. While Obama pardoned 212 people and commuted the sentences of 1,715 prisoners, including 568 serving life sentences, Trump has acted mainly on a few high-profile cases brought to him by associates and allies.

“I’m grateful to the president for allowing Alice to go home after 21.5 years in prison and to Kim Kardashian for her advocacy on Alice’s behalf,” said Jennifer Turner, a lawyer with the American Civil Liberties Union, which has championed Johnson’s case. “I urge the president to do the same for other federal prisoners serving extreme sentences that don’t match the offenses, while reforming our draconian sentencing laws that produce these senseless punishments.”

The Justice Department declined to comment on the president’s decision. According to its website, Johnson never applied for clemency through the normal department channels.

Trump last week pardoned Dinesh D’Souza, a prominent conservative author and filmmaker convicted of campaign finance violations, and suggested that he might use his clemency power on behalf of former Gov. Rod R. Blagojevich of Illinois and Martha Stewart, the lifestyle guru.

He has also pardoned four others whose cases were championed by conservatives or celebrities, including Joe Arpaio, the former Arizona sheriff known for his tough approach to immigration; I. Lewis Libby Jr., the chief of staff to former Vice President Dick Cheney; Jack Johnson, the African-American boxing legend; and Kristian Saucier, a former Navy sailor.

Johnson had no fame or fortune, but her situation became a symbol for activists pushing for sentencing reform, an example of a system that in their view has taken punishment too far and disproportionately affected African-Americans like her. She was singled out by the ACLU as well as by Mic, a news website that seeks to “give voice to the underrepresented” and interviewed Johnson about her plight.

“It’s like an unexecuted sentence of death,” she told Mic about her life sentence. Her family, she added, “told me that coming to visit me in prison is like visiting a grave site.”

“They said that they could see the place where my body lay but they can never take me home again,” she said.

A single mother of five in Memphis, she struggled with gambling, unemployment, bankruptcy and foreclosure before becoming involved in a drug ring. She was arrested in 1993 as part of an operation that transported cocaine from Houston to Memphis, relaying coded messages between conspirators. She also purchased a house with a down payment that she structured with three separate money orders under the $10,000 reporting limit.

Johnson was convicted of conspiracy to possess with intent to distribute cocaine, attempted possession of cocaine with intent to distribute and deliver, money laundering, conspiracy to commit money laundering and structuring a monetary transaction, according to the ACLU. Under mandatory sentencing rules, she was given a life term without parole. Several co-defendants who testified against her were sentenced to probation or terms up to 10 years.

While in prison, where she became a grandmother and great-grandmother, Johnson took educational and vocational programs, volunteered to help sick and dying prisoners, and helped coordinate the prison’s Special Olympics.