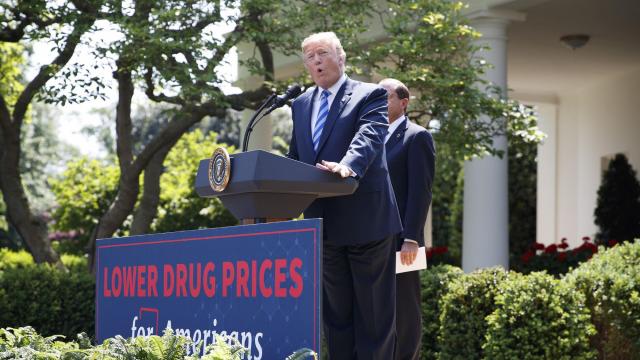 WASHINGTON — The Trump administration proposed on Monday to cut costs for Medicare by reducing the number of prescription drugs that must be made available to people with cancer, AIDS, depression, schizophrenia and certain other conditions.

Under the proposal, health insurance plans that provide drug coverage to Medicare beneficiaries would no longer have to cover all of the drugs in six “protected classes.”

The change would take effect in 2020 and would lead to lower out-of-pocket costs for Medicare beneficiaries, the administration said.

The proposal comes six months after President Donald Trump vowed to “bring soaring drug prices back down to earth” — and three weeks after many Democrats swept to victory in midterm elections by promising to rein in drug prices.

The insurers secure discounts on many medicines by negotiating prices with drug manufacturers. If they could exclude certain drugs in the six therapeutic classes, they could negotiate better deals, the Trump administration said.

“President Trump is following through on his promise to bring tougher negotiation to Medicare and bring down drug costs for patients, without restricting patient access or choice,” said Alex M. Azar II, the secretary of health and human services.

The coverage requirement has been in place since it was adopted by the George W. Bush administration in 2006 to ensure that Medicare beneficiaries would have access to “all or substantially all drugs” in the six treatment categories.

Advocates for people with these conditions strongly support the coverage requirement and defeated an attempt by the Obama administration to roll back some of the protections.

“The Trump administration proposal is bad medicine and dangerous to people living with HIV,” said Carl E. Schmid II, deputy executive director of the AIDS Institute, a public policy and advocacy organization for patients. “Not all HIV medications are the same. The Medicare Part D program is working well for people with HIV, and there is no reason to take these draconian actions.”

The drug industry also criticized the proposal. James C. Greenwood, president of the Biotechnology Innovation Organization, said the proposal would undermine protections for “some of America’s sickest and most vulnerable Medicare beneficiaries,” allowing “insurance company bureaucrats” to limit access to drugs.

Juliet C. Johnson, a spokeswoman for Pharmaceutical Research and Manufacturers of America, said the proposal could jeopardize the health of some people with HIV/AIDS, cancer and mental illness.

But Trump administration officials said their proposal would bring Medicare into line with practices widely used by commercial insurers and employer-sponsored health plans to manage the use of prescription drugs.

Private-market discounts for drugs in the protected classes are typically 20 to 30 percent, “but the average discount across all protected classes in Part D is just 6 percent,” Azar said in a blog post with Seema Verma, administrator of the Centers for Medicare and Medicaid Services.

“Ultimately,” Verma said, “the changes we are proposing would reduce costs for protected class medicines and therefore expand access to these important medicines.”

Insurers have lists of covered drugs known as formularies.

Under the proposal, Verma said, Medicare plans could “exclude from their formularies protected class drugs with price increases that are greater than inflation, as well as certain new drug formulations that are not a significant innovation over the original product.”

In other words, she said, if the proposal is adopted, “Part D plans don’t have to cover — they can remove — drugs with a sharp price increase and drugs that are not a significant innovation.” The Trump administration would allow Medicare drug plans to use two other tools to manage the use of drugs in the protected classes. Insurers could require beneficiaries to get advance approval — “prior authorization” — for a drug before the insurer would pay for it.

In addition, Medicare drug plans could require patients to try less expensive medications before the insurer would cover more costly drugs for the same condition, a practice known as step therapy.

Federal officials said Medicare beneficiaries would not be adversely affected by the proposal unveiled Monday.

“Seniors will remain in the driver’s seat,” Verma said. If they do not like the restrictions in a drug plan, they can choose a different plan, so “these new tools will only become as common as beneficiaries want them to be.”

The administration would also require Medicare drug plans to notify doctors of the cost of the drugs they are prescribing, and the out-of-pocket cost to the patient. This information would be sent to doctors when they are writing electronic prescriptions, and the insurer could also inform the doctor of lower-cost alternative therapies.

CVS Health, which manages drug benefits for millions of people, has recently begun providing such information and says it has already saved money for patients.