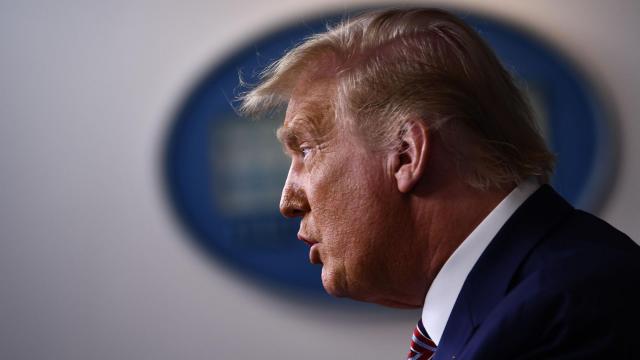 CNN — Clubby reinforcements have been summoned. A stack of flashcards -- question on front, response on back -- is at the ready. A binder has been dutifully collated.

Whether any of that helps President Donald Trump deliver a winning debate performance on Tuesday remains to be seen. Heading into this year's inaugural general election showdown, Trump has written off formal preparations as unnecessary given the daily demands of the job and instead hopes his brawling instincts and an unguarded embrace of personal attacks will carry him through.

Efforts to focus the preparation-averse Trump on the upcoming debate have occurred in sporadic bursts, including one 30-minute session last weekend. This past Sunday they resumed with a short question-and-answer period utilizing the flashcards campaign advisers prepared to try and hone what have so far been unwieldy attempts to define Democratic rival Joe Biden. Trump did less than two hours of prep total, a person familiar told CNN.

New revelations about Trump's taxes also forced aides to begin devising ways for the President to address the matter when it inevitably arises on Tuesday. So far, Trump's response has been a contradictory mixture of claiming the report, published in The New York Times, is false while also insisting the information used to prepare it was obtained illegally.

Former New Jersey Gov. Chris Christie and the President's personal attorney Rudy Giuliani -- who was at the White House on Sunday to help manage the tax story -- were also brought into the debate sessions, though people familiar with them said the question-and-answer rounds often got sidetracked while Trump delved into other matters. On Monday, Christie was seen arriving to the White House again alongside Kellyanne Conway, the longtime Trump adviser who announced her departure from the White House in August citing a need to focus on her family.

Trailing in polls as Americans already begin voting early, Trump is hopeful Tuesday's debate at Case Western Reserve University in Cleveland can provide an eleventh-hour lifeline to his struggling reelection effort. Though his campaign aides acknowledge there are few minds left to change in this year's contest, they are hopeful a strong performance can motivate Trump's supporters to vote and a lashing of Biden can depress enthusiasm among Democrats.

Trump faces a well-documented recent history of incumbent presidents underperforming during the first debate of their reelection cycle, even as they went on to win the election. Confronting rivals with fresher debating experience from hard-fought primary campaigns, presidents have sometimes strained to balance a presidential demeanor while also landing attacks.

Trump, who has cared little about appearing presidential during his first term in office, likely won't suffer similarly. He has expressed a desire to get under Biden's skin by waging brutal personal attacks against members of his family, including his son Hunter and brandishing questions about Biden's past -- from old plagiarism incidents to more recent allegations of sexual misconduct -- that he hopes will rattle the former vice president. He has already baselessly accused Biden of taking performance-enhancing drugs ahead of the debate and some aides expect him to raise it during the event itself.

He has resisted conducting formal mock debate sessions in part because he believes people around him took undue credit for his success during the latter debates in 2016, people familiar with the matter said.

During that cycle, Trump appeared much more amenable to debate preparation -- including enlisting Christie, narrowing his circle of advisers and seeking to avoid distraction at his New Jersey golf club -- after his first debate with Hillary Clinton went poorly. He was in the middle of a debate session then when the Washington Post published the infamous "Access Hollywood" tape and never returned to prep, a person who was there told CNN.

Trump has a history of trying to counter-program the debates. After the "Access Hollywood" tape was published in 2016, he had aides float rumors that he might drop out, only to then invite three women who have accused former President Bill Clinton of sexual harassment to join him in front of cameras only hours before the next debate in St. Louis, Missouri, started.

Now that he is president, however, Trump has found preparing for debates a tedious chore compared to a job which puts him in front of cameras for hours every day.

As Biden holes up at his Wilmington, Delaware, home in intensive debate preparation, much of Trump's daily activity has been available for all to see -- from events at the White House to a string of campaign rallies to a Sunday golf outing.

There was scant evidence Trump was spending the day ahead of the debate in lengthy mock face-offs. On Monday morning, he made a surprise appearance on the South Lawn to survey a new all-electric pickup truck. He convened reporters in the Rose Garden later in the day for an announcement on Covid testing.

On Saturday, the President was largely preoccupied with the pending announcement of Amy Coney Barrett as his Supreme Court nominee and held no formal debate prep sessions, according to people familiar with the matter. Barrett and her large family spent several hours at the White House during the day, including meeting with Trump and the first lady in the Oval Office as her children entertained themselves in the Roosevelt Room. After the announcement Trump flew to Pennsylvania for a campaign rally.

On Sunday, Trump spent much of the morning and early afternoon at his private golf club in Virginia -- and was seen playing a round on the course midday -- before convening an early evening press conference, which had no discernible purpose other than repeating his praise of Barrett and making false claims about mail-in voting. Christie and Giuliani joined him off to the side, and Trump said they were alternating playing Biden in debate practice sessions. Trump had told aides previously Christie shouldn't play Biden like he did Clinton.

"We had a little debate prep before we came here," Trump said at his news conference. "I think this whole thing, though, is debate prep. You know, what I do is debate prep every day."

In reality, people familiar with the matter said, both men along with several of the President's aides are informally tossing out lines they believe Biden might use to see how Trump responds.

That includes accusing Trump of mismanaging the coronavirus pandemic, which the President is likely to rebut by citing his decision to ban travel from China -- and accusing Biden of being soft on Beijing. Aides also expect Biden to bring up reports Trump disparaged members of the military, which he will seek to counter by pointing to his record of securing Pentagon funding while accusing Biden of supporting endless foreign wars.

He is also likely to argue he has done more in his four years in politics than Biden has done in his five-decade career, according to a source close to the Trump campaign who is familiar with the preparation for the debate. But Trump views Biden as a professional who's been debating for many years, and the President believes his adversary will be at the top of his game, the source said.

The Commission on Presidential Debates, which organizes the general election events, said Monday there would be no opening statements and only a small number of ticketed guests in the audience. A White House official said that would including first lady Melania Trump and the President's daughter Ivanka.

The candidates will neither shake hands with each other nor with the debate's moderator, Chris Wallace of Fox News. They won't wear masks onstage, but everyone in the debate hall will be tested for Covid.

A list of topics Wallace selected includes Trump and Biden's records, the Supreme Court, Covid-19, the economy, "race and violence in our cities" and election integrity. The White House also said Monday they hoped China would also arise.

"It is our hope that China comes up because we have a strong record to stand on," press secretary Kayleigh McEnany said during an appearance on Fox Business Channel.

Incumbent presidents have struggled before when it comes time to debate during their bid for reelection, though unlike Trump they spent more time preparing. President George W. Bush made a last-minute decision in 2004 to retreat to his ranch in Texas ahead of his first debate with Sen. John Kerry after aides deemed the White House too distracting.

But a president cannot entirely escape the realities of the job; for Bush that year it was hurricane season and wars in Iraq and Afghanistan. In the debate, he was described as alternately tired-sounding, angry and sour. Polls showed Americans believed Kerry won the debate by a wide margin.

President Barack Obama held a debate camp outside of Las Vegas in the lead-up to his first showdown with Mitt Romney in 2012 -- but wasn't necessarily thrilled to be there. Obama notoriously despised debating, believing them a test of performance and style over more substantive matters.

"Basically they're keeping me indoors all the time," Obama told a supporter during a phone call when he visited a local campaign office. "It's a drag. They're making me do my homework."

When it came time to debate Romney, Obama delivered a lackluster performance that failed to land any attacks on Romney and that his campaign barely tried to spin as anything but a disappointment.

"We had one stinker in there," Obama recently told his old campaign manager David Plouffe on his podcast. "It was basically on me."

Hunkered down to prepare for his next debate at a riverside golf resort in Williamsburg, Virginia, aides made sure to tell reporters that Obama's golf clubs stayed behind.