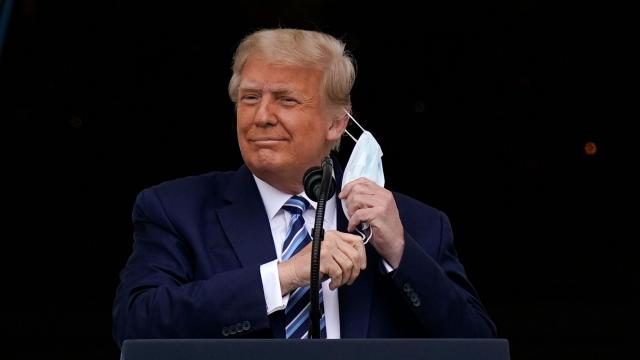 CNN — The next three weeks will likely amount to the busiest of President Donald Trump's tenure in terms of schedule and travel, pushing the 74-year-old President fresh from his coronavirus hospitalization -- which included supplemental oxygen and a fever -- into a frenzied final campaign offensive.

The breakneck pace isn't being moderated, at least for now, based on Trump's condition. While vague, White House doctors have said he is cleared for a return to a normal schedule and on Monday, Dr. Sean Conley said Trump has tested negative for Covid-19 on consecutive days.

The President has insisted he feels better than he did before he had coronavirus and has itched to return to the campaign trail to make up for lost time. He boarded Air Force One without a mask on Monday as he resumed his campaign schedule outside Orlando. A few hours later, he claimed -- with no way of knowing for sure -- that he is now immune from reinfection.

"I went through it. Now they say I'm immune," Trump told a mostly mask-less crowd shortly after taking the stage situated outside an airplane hangar. As he made his way to his podium, Trump tossed out packs of face masks, but made no attempt to model them.

There is no evidence that people are immune to coronavirus if they have been infected once, according to the US Centers for Disease Control and Prevention. The CDC specifically cautions people not to assume they are immune.

But Trump has heeded few of the CDC's recommendations over the course of the months-long pandemic and did not start paying them mind on Monday.

This week alone will bring the President to Florida, Pennsylvania, Iowa and North Carolina -- all states he won in 2016 -- with stops next Friday and over the weekend still being finalized. While Trump occasionally overnights at his properties, his habit has been to fly out-and-back, returning to the White House often in the dark morning hours.

Trump spoke energetically for a little more than hour Monday -- a lengthy speech, but still shorter than his typical rallies, which can often stretch from 90 minutes to two hours.

Even before he became infected with coronavirus, some of Trump's associates thought he seemed tired from constant trips out on the campaign trail punctuated by his lengthy rallies. In the days leading up to his diagnosis, Trump sounded hoarse to some who spoke to him and at a fundraiser the day he tested positive, attendees described him as seeming "exhausted."

But trailing in polls and without much time to reverse his fortunes, Trump is pressing advisers to schedule more rallies and more travel in the lead-up to Election Day. His campaign manager Bill Stepien, who also tested positive for coronavirus last week, downplayed any concerns about the President's health.

"I've spoken with the President every single day since he entered Walter Reed. He is strong, he is energetic, he is raring to go. I think his campaign calendar reflects his health and well-being and enthusiasm to get back on the trail," he told reporters during a conference call Monday, adding Trump's return to the campaign trail will be a "big shot in the arm for the campaign."

Jason Miller, a senior strategist for the campaign, told reporters on Monday Trump was "getting on my case for not having enough rallies."

Campaign officials said they expected the President to hold two or three events per day, with the pace increasing as November 3 approaches. They have pointed to 2016 as their model, highlighting polls from the final days of that race that didn't accurately predict Trump's victory and suggesting the President would again defy the odds.

But the variables in that race are hardly being reproduced this year. Trump's opponent, former Vice President Joe Biden, is more popular than Hillary Clinton. And the global coronavirus pandemic is a backdrop that Trump cannot shake, particularly after getting sick himself.

His schedule this week, all in states he won in 2016, illustrates the defensive nature of his campaign strategy as he works to maintain his edge instead of expanding his electoral count.

Trump has already passed up one major opportunity to appeal to voters. He balked at a proposal to conduct the second presidential debate virtually, and after extensive back-and-forth the event was canceled outright. Trump is still in talks to participate in a network television town hall on Thursday night, when the debate had been scheduled.

Instead he's focused heavily on his rallies, which aides say act as much as an outlet for Trump's moods and grievances as they are a political opportunity.

At an event on the White House South Lawn on Saturday, Trump addressed a crowd from the Blue Room balcony for only 20 minutes -- well short of the length he typically goes at campaign rallies and briefer even than the 30 minutes previewed by officials ahead of time. At the event, Trump hailed his recovery from the virus and said he was "feeling great."

While coronavirus typically only receives a fleeting mention during Trump's campaign rallies, his bout with the disease will make it more difficult for him to ignore in the final stretch of the campaign. Trump and his campaign have been working for months to turn attention elsewhere, including on the current Supreme Court vacancy and on improving economic numbers.

But with a story to tell on his hospitalization and recovery, it's unlikely the pandemic will fade from attention before Election Day. Trump has repeatedly sought to project optimism that therapeutics -- which he calls "cures" -- or a vaccine are in the imminent offing, though it is growing increasingly unlikely a vaccine will be announced by November 3.

There are no plans to change coronavirus protocols at the President's rallies, according to campaign officials. Attendees have their temperatures checked at the door and are encouraged to wear masks, but the campaign doesn't require it and a majority of people don't keep them on.

Even before he was airlifted to Walter Reed, Trump has been intently focused on how his sickness would play politically, according to people who spoke to him. He was initially reluctant to go to the hospital at all, worried it would project weakness.

Inside the hospital, he grew frustrated at what he deemed exaggerated depictions of his condition and was particularly incensed to see television commentators discussing the prospects of transferring power to Vice President Mike Pence.