Trump calls 9th Circuit a 'big thorn in our side,' accuses judges of imperiling US security 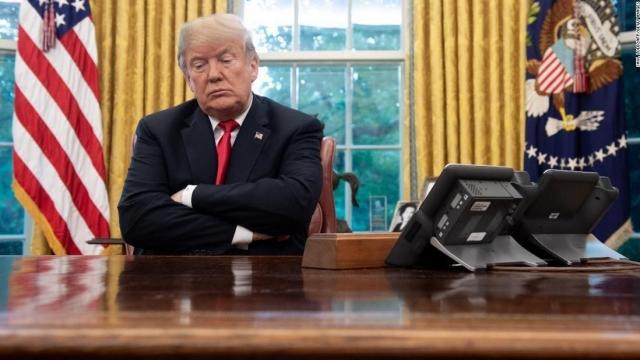 (CNN) — President Donald Trump on Thanksgiving morning railed against the US 9th Circuit Court of Appeals as a "big thorn in our side" and accused the American judiciary of undermining national security.

Earlier this week, a judge from the Northern District of California -- where cases get appealed to the 9th Circuit -- issued a temporary restraining order blocking the Trump administration from barring migrants who cross into the US illegally from seeking asylum.

"We get a lot of bad court decisions from the 9th Circuit, which has become a big thorn in our side," Trump said Thursday during a teleconference call with military members. "We always lose, and then you lose again and again, and then you hopefully win at the Supreme Court, which we have done. But it's a terrible thing when judges take over your protective services, when they tell you how to protect your border."

"It's a disgrace," he continued.

Trump has previously criticized the 9th Circuit as well as federal judges whose decisions he dislikes. But his tweets on Thursday accusing federal judges of imperiling US security and calling out Chief Justice John Roberts represent yet another extraordinary breach of presidential protocol and demonstrate Trump's frustration with judges who have ruled against his administration's most controversial policies.

The President opened the day by continuing a feud with Roberts, who had defended the federal judiciary in a pointed rebuke to Trump on Wednesday.

"Justice Roberts can say what he wants, but the 9th Circuit is a complete & total disaster," Trump tweeted, adding that the court had what he called "horrible reputation."

Calling the court "out of control," Trump tweeted that "Judges must not Legislate Security and Safety at the Border, or anywhere else. They know nothing about it and are making our Country unsafe. Our great Law Enforcement professionals MUST BE ALLOWED TO DO THEIR JOB! If not there will be only bedlam, chaos, injury and death. We want the Constitution as written!"

Trump's feud with Roberts came after the chief justice issued on Wednesday a remarkable, public rebuke of the President's disparaging remarks about federal judges.

"We do not have Obama judges or Trump judges, Bush judges or Clinton judges," Roberts said in a statement. "What we have is an extraordinary group of dedicated judges doing their level best to do equal right to those appearing before them. That independent judiciary is something we should all be thankful for."

Trump on Thursday claimed the 9th Circuit's decisions were overturned "more than any circuit in the country," though CNN Supreme Court analyst Steve Vladeck noted on Twitter that over the last five terms, three federal appeals courts have had cases overturned at a higher rate than the 9th Circuit.