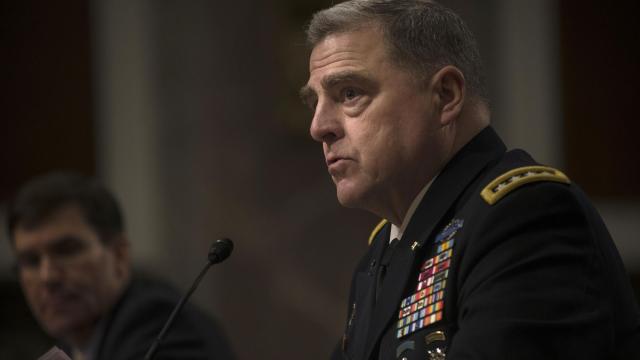 WASHINGTON — President Donald Trump is expected to name Gen. Mark A. Milley, the Army chief of staff, to be the next chairman of the Joint Chiefs of Staff, the top-ranking military position in the country, administration officials said Friday.

Trump teased the decision in remarks to reporters at the White House on Friday, saying that he would make an announcement at the Army-Navy football game Saturday in Philadelphia.

“I can give you a little hint: It will have to do with the Joint Chiefs of Staff and succession,” the president said.

Trump, who made several staff change announcements Friday, met two weeks ago with Milley and Air Force Chief of Staff Gen. David L. Goldfein, the two men believed to be in contention to succeed Gen. Joseph F. Dunford Jr. of the Marines, whose term as chairman expires next autumn.

It is unusual for a successor to the top military job to be chosen so early, but the president has long been known to have a preference for Milley, an ebullient officer who is well known in the halls of the Pentagon and at Army bases around the world. That preference for Milley was at odds with Trump’s defense secretary, Jim Mattis, who is believed to have wanted Goldfein for the job.

But Trump has in the last few months been overriding Mattis on a number of issues, most recently the decision to send U.S. troops to the southern border with Mexico to counter caravans of migrants making their way north from Central America. But Pentagon officials said that Mattis, a retired Marine, was perfectly willing to work with Milley, a graduate of Princeton University who also holds a master’s degree in international relations from Columbia University.

Milley has a long military pedigree with some of the Army’s legendary units, like the 82nd Airborne Division and the 10th Mountain Division. He has served multiple combat deployments in Afghanistan and Iraq.

Before he was appointed Army chief in May 2015, Milley was head of Army Forces Command at Fort Bragg, North Carolina, where he decided to charge Sgt. Bowe Bergdahl with desertion for walking off his post in Afghanistan in 2009. Bergdahl was captured and held by the Taliban for five years and was released last year in exchange for five Taliban prisoners held at the military prison at Guantánamo Bay, Cuba. He was dishonorably discharged last year.

A Boston Red Sox fan, Milley carries himself with the kind of earthy manner that screams Fenway Park. He does not shy away from the occasional ribald story, although he does sometimes pepper conversations with talk of “little engines that could” and red cabooses and other well-worn references to inspirational stories.

At the same time, anyone talking to him knows where they stand; he is direct, an approach that played well in Afghanistan, where he was the No. 2 U.S. commander. He was popular among the troops he commanded and got on well with Afghan military officers and civilian officials, even when he pushed back against some of their wilder claims about the war.

His political skills — the same skills he used in the last two years to become a favorite of Trump — were on display during a day trip in summer 2013 to northern Afghanistan, where he listened patiently as a senior Afghan security official blamed Pakistanis and other foreigners for all the violence in the country.

Milley responded politely but firmly, saying that while foreign insurgents were exacerbating the situation, the Taliban are an Afghan movement, and that it was ultimately up to Afghans to work out their differences if they wanted peace in their country. At the time, it was a message that Afghans had long ago tired of hearing from the Americans, but Milley managed to deliver it without offending his host.

Five years later, U.S. military officials are still delivering that same message, as the Afghanistan War continues on. As the Army chief of staff, Milley has instead turned his attention to whether almost two decades of fighting in Afghanistan — and Iraq and Syria — has taken away from the Army’s ability to fight a land war against a more traditional military adversary.

“Today, a major in the Army knows nothing but fighting terrorists and guerrillas, because he came into the Army after 9/11,” Milley said in an interview in 2016 with The New York Times. He described a loss of what he called muscle memory: how to fight a large land war, including one where an established adversary is able to bring sophisticated air defenses, tanks, infantry, naval power and even cyberweapons into battle.