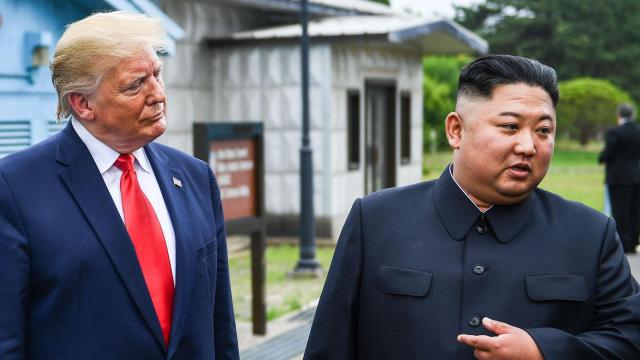 CNN — Secretary of Defense Mark Esper landed in South Korea on Thursday to navigate renewed threats from an "enraged" North Korea and newly heightened strain in the alliance with Seoul that congressional aides, lawmakers and Korea experts say has been caused by President Donald Trump.

Trump is demanding that South Korea pay roughly 400% more in 2020 to cover the cost of keeping US troops on the peninsula, a congressional aide and an administration official confirmed to CNN.

The price hike has frustrated Pentagon officials and deeply concerned Republican and Democratic lawmakers, according to military officials and congressional aides. It has angered and unnerved Seoul, where leaders are questioning US commitment to their alliance and wondering whether Trump will pull US forces if they don't pay up.

"Nothing says I love you like a shakedown," said Vipin Narang, an associate professor at MIT who follows the Korean peninsula, summarizing South Korean uncertainty about the US.

In the US, congressional aides and Korea experts familiar with the talks say the President's $4.7 billion demand came out of thin air, sending State and Defense Department officials scrambling to justify the number with a slew of new charges that may include Seoul paying some costs for US personnel present on the peninsula and for troops and equipment that rotate through.

Negotiations are underway as North Korea threatens to step up its weapons development, deepening Seoul's anxiety. On Thursday, Pyongyang condemned US-South Korean joint military exercises, saying it was "enraged" and threatening to respond with "force in kind."

North Korea has already launched 24 missiles this year, each a violation of UN resolutions, to match the country's previous annual record for firing off projectiles that threaten South Korea and Japan, according to Bruce Klingner, a senior fellow at the Heritage Foundation.

Germany, France and the United Kingdom recently condemned Pyongyang for the launches, saying they undermined regional security and stability. Meanwhile, South Korean leaders are acutely aware that Trump has downplayed the launches, saying he is "not at all" troubled by them.

"There are a lot of hard feelings," Klingner said of South Korean views of the US right now, adding that "people are questioning the viability of the US as an ally."

That's being driven in part by US acquiescence to North Korea's missile launches, which "is raising angst... about whether the US is a reliable ally," Klingner said. "The exorbitant push to further increase the US demand for the cost of stationing US forces overseas is adding to that."

Scott Snyder, director of the US-Korea policy program at the Council on Foreign Relations, said the extreme nature of the price hike is creating "worry that Trump is doing this as a pretext for withdrawal" of US troops.

"The main side effect that I see is that it raises questions about the credibility of the United States as a protector, as an alliance partner," Snyder said. "And that's not good for the relationship."

The administration official said the argument is that the US does many things to ensure South Korean security that haven't been accurately accounted for, for decades. "It was one thing when Korea was recovering from the war, but now they're one of the world's leading economies," the official said.

"The Koreans have said themselves they ultimately want to take over the security of Korea and stand as a peer in the security sphere," the official said. Now, "they need to make some fundamental investments to get where they say they want to be, so this is an opportunity for them."

A spokesperson for the State Department, which has the lead on negotiations, said that "sustaining the costs of our global military presence is not a burden that should fall on the US taxpayer alone, but is a responsibility that should be shared fairly with allies and partners who benefit from our presence."

The Korean embassy did not return requests for comment.

The US-South Korea cost sharing agreement has been in place for decades and, until Trump, was renegotiated every five years. During the 2016 campaign, candidate Trump declared that he would pull US troops from the peninsula if he didn't get 100% compensation for their presence.

Last year, when the Special Measures Agreement came up for negotiation, Trump asked for a 50% increase from Seoul. Ultimately, the two sides agreed South Korea would pay 8% over the prior year's cost, but that the agreement would be renegotiated yearly.

This year, Trump raised the asking price from approximately $1 billion to $5 billion before being convinced by officials at the State Department and Pentagon to winnow that down to $4.7 billion, according to a congressional aide and the administration official.

Esper, like other administration officials, has refused to confirm that figure publicly, saying Wednesday only that "we have asked for a significant increase in the cost-sharing for our deployed troops."

Klingner is one of several Korea experts who suggest that Trump pulled the figure out of thin air. Officials at the relevant agencies and aides in Congress who follow Asia are similarly perplexed. "I have no idea where the President pulled this number from," said the congressional aide.

"It seems pretty clear ... that State and DOD were working to figure out how to justify the $5 billion figure... it's not like, 'We were developing a new concept that includes the following 17 categories and this is what it comes to.' It was a backwards process," said the aide characterized the reaction to be one of shock, " 'the President wants $5 billion and how do we justify that to the Koreans?' They were throwing everything in there that allowed them to argue with a straight face that this covers the burden-sharing costs of the alliance."

To justify the price tag, officials at State and the Pentagon expanded the costs Seoul would cover "from basing, sewage, the usual things, to include 'readiness,'" the aide said. Administration officials would not confirm that.

But it could mean charging Seoul for joint military exercises, including rotational forces that aren't always present on the peninsula. "So if we had bombers stop by the peninsula as a show of force, I guess like an Uber driver, we would bill them for the trip," the aide said.

The US may also ask South Korea to pay for "a whole range of personnel costs for US personnel stationed on Peninsula," the aide said. In response, the aide said, the Koreans are asking, " 'Are you guys mercenaries now? Is this a business arrangement?' "

Military officials have told CNN they are distressed about the request and that they have been concerned the President's foreign policy decision making could increasingly be shaped by his concerns about the 2020 election campaign or impeachment pressure.

The congressional aide said Pentagon officials are expressing their discomfort on Capitol Hill as well. "The career professionals and career military: they're beside themselves," the aide said, "but [Trump is] the commander in chief, so they're in a box."

"The Koreans are outraged," the aide continued, particularly because elections are coming in April and they don't think the cost increase is defensible in their National Assembly.

Council on Foreign Relations expert Snyder said that historically, the formula for cost sharing has seen increases of 5% to 10%, but "the gap between 5% and almost 500%... stretches the bounds of political plausibility."

A particular hurdle, Snyder said, is any request that Seoul pay for assets "that may be used in the event of a conflict, but that aren't actually based in Korea. That's the most sensitive question if you're talking about the Korean taxpayer."

'A lot of concern'

Sen. Edward Markey, the leading Democrat on the Senate Foreign Relations subcommittee on Asia said that he was "troubled by President Trump's demand. ... If South Korea decides that it is better off without the United States, President Trump will have undermined an over 60-year shared commitment to peace, stability, and rule of law. The region is less safe when countries lose confidence in America's ability to lead."

Sen. Cory Gardner of Colorado, the Republican chairman of the Senate Foreign Relations subcommittee on Asia, did not respond to repeated requests for comment. Neither did the second ranking Republican on the subcommittee, Sen. Marco Rubio of Florida, or the chairman of the Senate Foreign Relations Committee, Sen. James Risch of Idaho.

Behind closed doors though, the congressional aide echoed another colleague on Capitol Hill, saying that "there's a lot of concern up here with both Democratic and Republican staff. People ... are not happy. They think this is really dangerous."

CORRECTION: This story and headline have been updated to accurately reflect that the price tag increase is roughly 400%.