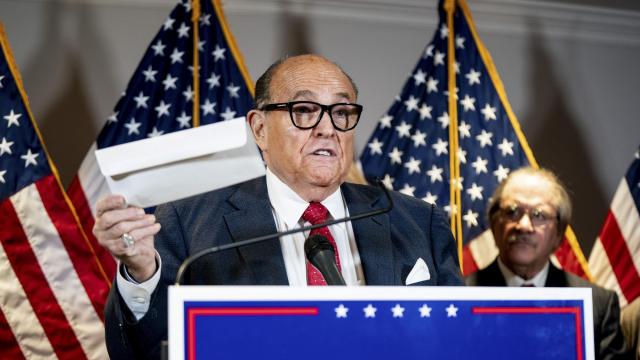 CNN — President Donald Trump, irritated at being impeached for a second time, has told people to stop paying Rudy Giuliani's legal fees, a person familiar with the matter tells CNN, though aides were not clear if the President was serious about his instructions given he's lashing out at nearly everyone after the day's events.

Trump became the first president in US history to be impeached twice on Wednesday, one week after a mob stormed the US Capitol following a speech by the President that excoriated his supporters to fight against the counting of the electoral votes that would affirm President-elect Joe Biden's win. The insurrection left five people dead, including one Capitol Police officer, and has left the nation's capital and state capitols around the country preparing for potential violence as Biden is set to be inaugurated next week.

Trump has been blaming his longtime personal attorney and many others for the predicament he now finds himself in, though he has not accepted any responsibility in public or in private, people familiar with his reaction told CNN. Giuliani is still expected to play a role in Trump's impeachment defense but has been left out of most conversations thus far.

Another source of Trump's ire is House Minority Leader Kevin McCarthy, who incensed Trump further on Wednesday by saying he bears responsibility for last week's riot. The President had already been upset with McCarthy after the California Republican left the option of censuring Trump on the table in a letter to colleagues earlier this week.

The details about Giuliani's legal fees were first reported by the Washington Post.

The President is now more isolated than ever. Several of his Cabinet secretaries -- the ones who haven't resigned in protest -- are avoiding him, his relationship with the vice president remains fractured and several of his senior staffers are scheduled to depart their posts this week.

One White House adviser told CNN that "everybody's angry at everyone" inside the White House, with the President being upset because he thinks people aren't defending him enough.

"He's in self-pity mode," the source said, with Trump complaining he's been under siege for five years and he views this latest impeachment as a continuation of that.

But many people close to Trump view the current situation as different than his first impeachment, when he was charged with pressuring the government of Ukraine to dig up dirt on Biden to try and influence the presidential election.

"His actions led to here, no one else," the White House adviser said, adding, "He instigated a mob to charge on the Capitol building to stop the certification, he's not going to find a lot of sympathetic Republicans."

During the last impeachment effort, Trump allies in and out of the White House publicly defended him and sent out talking points throughout the impeachment proceeding. No similar effort materialized this time, with House Republican leadership deciding against pressuring their colleagues to stay in line and instead allowing them to vote their conscience. Ten Republicans voted with every Democrat to pass the single article of impeachment.

With his favorite mode of communication -- Twitter -- no longer available to him after Trump was banned from the social network on Friday, another person close to the White House worried that Trump may lash out further.

"He's been holed up in the residence, that's never a good thing. He's by himself, not a lot of people to bounce ideas off of -- whenever that happens he goes to his worst instincts," that person said. "Now that Twitter isn't available God only knows what the outlet will be."