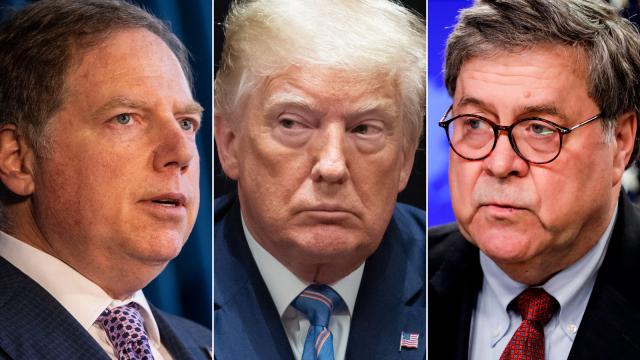 CNN — Geoffrey Berman, the powerful prosecutor atop the Manhattan US Attorney's office who has pursued President Donald Trump and his allies, said he would exit his post Saturday, ending a standoff after Trump and Attorney General William Barr fired him.

Berman's departure came a day after he refused Barr's request that he resign. In a curt letter to Berman on Saturday, Barr told him Trump had agreed to remove him and conceded that Berman's deputy would succeed him.

"Unfortunately, with your statement of last night, you have chosen public spectacle over public service," Barr wrote in his letter to Berman. "Because you have declared that you have no intention of resigning, I have asked the President to remove you as of today, and he has done so."

He provided no justification for pushing out Berman.

Speaking to reporters shortly after Barr's letter was made public, however, Trump said, "That's his department, not my department." He added: "I'm not involved."

Berman's firing caps a remarkable 24 hours that encompassed a power struggle over the leadership of the most prominent prosecutors' office outside Washington -- one that has prosecuted one of Trump's lawyers, is investigating another and has probed the activities of the President himself.

During a meeting at a Manhattan hotel in New York on Friday, Barr had asked Berman to resign, but Berman refused, CNN reported, and hours later Barr issued a statement saying Berman had "stepped down." Two hours later, around 11 p.m. ET, on Friday, Berman said he had learned of his purported exit from a press release.

"I have not resigned, and have no intention of resigning, my position, to which I was appointed by the Judges of the United States District Court for the Southern District of New York. I will step down when a presidentially appointed nominee is confirmed by the Senate," Berman said.

On Saturday morning, with news cameras staked outside his lower Manhattan office, Berman entered the building, telling reporters, "I issued a statement last night, I have nothing to add to that this morning. I'm just here to do my job."

Though Barr had said Friday that he would install Craig Carpenito, a person close to Barr who is now the US attorney in New Jersey, to serve as Berman's acting replacement, the attorney general's letter Saturday noted that "by operation of law," Berman's current deputy, Audrey Strauss, will become acting US attorney.

"I anticipate that she will serve in that capacity until a permanent successor is in place," Barr wrote.

Berman's strategy of refusing to resign paid off for his former office. In a victory lap, Berman said he was leaving "In light of Attorney General Barr's decision to respect the normal operation of law" by appointing Strauss.

The move was viewed as a win for SDNY, where prosecutors had become uneasy over the prospect of a new leader viewed as loyal to Barr.

Berman's 18-hour hold-out appeared to force Barr to walk back his initial plan to appoint Carpenito. It isn't clear why Barr changed course but his appointment of Strauss proved enough for Berman to step down.

"After all this what did they gain by getting rid of Berman? Nothing," said one former SDNY prosecutor of Barr.

On Friday evening, Barr said he intends to nominate as Berman's permanent replacement Jay Clayton, the chairman of the Securities and Exchange Commission, who has never been a prosecutor.

The attorney general also announced in his letter to Berman that the DOJ's inspector general would provide oversight of the Manhattan US Attorney's office, a step that is likely to cause New York federal prosecutors, who famously prize their independence, to balk.

"Going forward, if any actions or decisions are taken that office supervisors conclude are improper interference with a case, that information should be provided immediately to Michael Horowitz, the Department of Justice's Inspector General, whom I am authorizing to review any such claim," Barr wrote.

Barr's effort to push out one of the most powerful prosecutors in the country had begun to run into headwinds Saturday morning, with Republicans signaling little appetite to fight to confirm a new US attorney amid Democratic accusations that the move was an effort to shield Trump's associates from federal investigation.

Republicans on Capitol Hill were blindsided by the late Friday night effort by Barr to seek the ouster of Berman and showed little willingness to confirm a new nominee without Democratic support -- meaning there is a real possibility that Clayton's nomination could languish.

The fast-moving developments seemed to catch by surprise Senate Judiciary Chairman Lindsey Graham, a close ally of Trump's and Barr's, who said Saturday he had not been told about the effort to fire Berman.

And in a significant announcement Saturday, Graham said he would honor tradition to let home-state senators sign off on a replacement for Berman's post, meaning that Democrats essentially have veto power over a replacement to a position considered the most powerful US attorney job in the country.

Meanwhile, it's not clear if Clayton was aware prior to Barr's announcement Friday that Berman wasn't willingly exiting his post.

Clayton was recently approached about the top prosecutor's job in Manhattan and was told that Berman was planning to step down, a person familiar with Clayton's plans told CNN. Clayton didn't know Berman had no plans to leave, this person said.

Clayton and Barr, who have known each other for years, discussed the possibility that Clayton could take the job.

That appears to contradict a Justice Department official's claim, previously reported by CNN, that Clayton initiated the conversation. The person familiar with the matter said Saturday that Clayton wasn't happy to become part of the standoff between Barr and Berman, and had been a willing participant in the job discussions for the Manhattan post based on his belief that Berman was exiting on his own accord.

Clayton didn't immediately respond to a request for comment.

Berman leaves behind a string of high-profile prosecutions and investigations. Since he became US attorney in early 2018, the office has prosecuted Trump's former attorney Michael Cohen, is investigating top Trump confidante Rudy Giuliani and indicted the former New York mayor's associates Lev Parnas and Igor Fruman.

Tensions between the New York and Washington offices have run high during his tenure, with Berman and Barr butting heads over the handling of some cases, including the indictment of Turkish bank Halkbank. Recently, SDNY prosecutors, who have expressed suspicions that Barr is funneling politically sensitive cases to other US attorney's office and to prosecutors inside the Justice Department's units. One of those cases is the insider trading investigation of Republican Sen. Richard Burr, who sold large stock positions as he was receiving briefings on the pandemic. The North Carolina senator has denied wrongdoing and said he is cooperating with the investigation.

SDNY prosecutors, which have experience bringing securities fraud cases, wanted to lead the investigation but Justice Department officials steered the case to the DC US attorney's office and DOJ's Public Integrity section.

Berman had also clashed with senior DOJ leadership over the handling of other cases and policies, people said, all of which contributed to a slow burn of distrust between the men.

Though it isn't clear that any one particular investigation or conflict led to Berman's ouster, federal prosecutors in New York, working under Berman, have continued to pursue cases that pose significant threats to Trump and his allies. In the past month, according to two people familiar with the matter, prosecutors and FBI agents have been actively interviewing witnesses as part of their investigation concerning Giuliani, Parnas and Fruman.

In April, during discussions about delaying the trial date for Parnas and Fruman as a result of the coronavirus pandemic, prosecutors informed the parties in the case that they expected to file additional charges in what's known as a superseding indictment no later than the end of July, according to one of the people familiar with the matter.