Trump lauds Ginsburg but is eager to nominate her replacement, source says 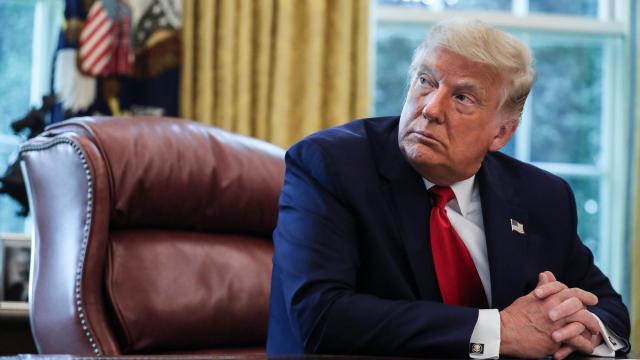 CNN — President Donald Trump hailed Supreme Court Justice Ruth Bader Ginsburg as a "brilliant mind" in a statement Friday evening, praising her for demonstrating "that one can disagree without being disagreeable toward one's colleagues of different points of view."

"Her opinions, including well-known decisions regarding the legal equality of women and the disabled, have inspired all Americans, and generations of great legal minds," the statement continued.

But a source close to the President told CNN that Trump has been "salivating" to nominate a replacement for the liberal stalwart even before her death on Friday and the possibility of picking a replacement for Ginsburg has weighed on his mind.

Trump specifically has said he would "love to pick" Judge Amy Coney Barrett -- who serves as a federal appeals court judge and is a favorite among religious conservatives -- but is "doubtful he will have Senate support," the source said.

He has previously said that he would aim to fill a Supreme Court vacancy during the final months of his term, telling conservative radio host Hugh Hewitt in August: "I would move quickly. Why not? I mean they would. The Democrats would if they were in this position."

The White House is prepared to move "very quickly" on putting forward a nominee to replace Ginsburg once Trump signals his intentions, a senior administration official said Friday night. Officials feel confident in their ability to shepherd a potential nominee through the process on a condensed timeline, and say they will await Trump's word on how to proceed.

The official said the process will be based in the White House Counsel's Office, led by Pat Cipollone, though it is expected that chief of staff Mark Meadows will be heavily involved on Capitol Hill.

The official said several potential nominees have been through at least some type of vetting given the previous vacancies and the list Trump produced earlier this month, which could help expedite the process.

An additional official said the campaign and White House had planned to put out a short list of candidates to fill a vacancy should one become available before the election. Ginsburg's passing has altered that planning, but shows the White House was already paring down candidates and making a shorter list.

Whomever Trump nominates will get a vote on the Senate floor, Senate Majority Leader Mitch McConnell has vowed, signaling a historic fight in Congress over one of the most polarizing issues in American politics.

"President Trump's nominee will receive a vote on the floor of the United States Senate," McConnell, a Kentucky Republican, said in a statement Friday evening that set him on a collision path with Democrats, though the exact timing of such a fight was not immediately clear.

Senate Republicans, who hold the majority in the upper chamber, only need 51 votes to confirm a new justice once one is formally nominated -- and Republican leaders have already previously vowed to fill any potential Supreme Court vacancy this year if one were to occur. Republicans currently control 53 seats.

Trump's first comments on Ginsburg's death came after a rally in Minnesota on Friday night where he appeared to hear the news for the first time from reporters. "Just died?" he responded, when asked about her death.

During his Minnesota rally, when the President still appeared to be unaware of Ginsburg's passing, he joked that will name Sen. Ted Cruz, a Texas Republican, as a Supreme Court nominee and said that "one of the things we've done that's so good is the Supreme Court."

"I even said I'm putting Ted Cruz as one of the people for the Supreme Court. You know why I did it? Because I wanted to make sure I had somebody on the list. We had about 45 unbelievable people. The smartest, the best, the absolute creme de la creme. The best minds in the country. Conservative. They believe in the Constitution. Little things like that," Trump told the audience.