Trump friend may be thinking twice about buying Weinstein Co. 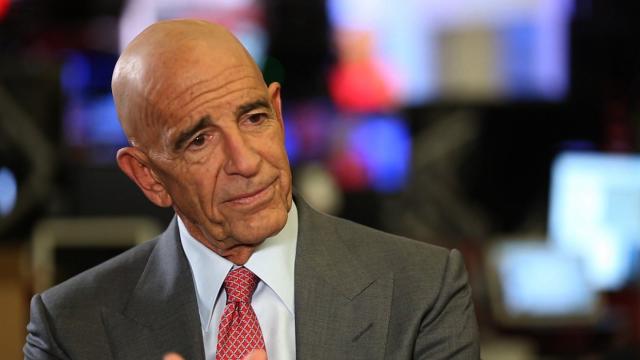 LONDON (CNNMoney) — A close friend of President Trump's may be having second thoughts about buying the crippled Weinstein Co.

Tom Barrack, head of the private equity firm Colony Capital, has been in talks to purchase all or part of the firm after co-founder Harvey Weinstein was accused of sexual assault and rape.

But comments by the investor on Wednesday suggest that a deal for the TV and film studio may be difficult to pull off.

"The creative product is something that we all looked at and thought was salvageable," Barrack told CNNMoney's John Defterios at an investor conference in Saudi Arabia. But, he added: "The liabilities surrounding the situation, as you see day by day, [have] become quite complex."

"It may be a challenge for our particular capital to rescue, but we'll know in a few days," said Barrack, who described Weinstein's behavior as "despicable" and "unacceptable."

Colony Capital agreed to provide Weinstein Co. with a financing deal earlier this month after The New York Times and The New Yorker published stories detailing a decades-long pattern of alleged sexual misconduct by its co-founder.

Weinstein Co. said at the time that it was negotiating with Colony Capital "for a potential sale of all or a significant portion of the company's assets."

Colony Capital has had a business relationship with Weinstein Co. for several years.

Barrack's name has been in the news lately because he is a rumored candidate to be the next White House chief of staff. He has been a close confidant of Trump's for years, and was the chairman of his private Presidential Inaugural Committee.

Weinstein was fired by his board on October 8 after reports of the alleged harassment came out. Since then, New York Attorney General Eric Schneiderman has announced an investigation into whether the producer or his employees broke the law.

Further reports by The New York Times and The New Yorker indicate that the company's senior management knew about some of Weinstein's behavior, although that is in dispute.

As a result, Weinstein Co. is stuck in a state of corporate limbo. There are widespread doubts in Hollywood about Weinstein Co.'s future as a standalone company.

The Weinstein Co. produces popular TV shows like "Project Runway" and films like "Lion." The company's next film, "The Current War," was supposed to come out in November, but it has now been delayed to early 2018.