Trump Floats an Election Delay, and Republicans Shoot It Down 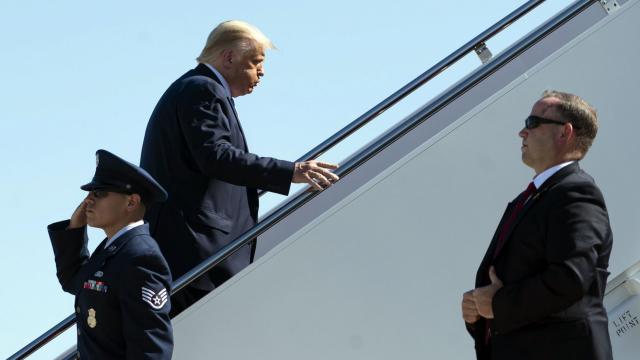 Facing disastrous economic news and rising coronavirus deaths, President Donald Trump on Thursday floated delaying the Nov. 3 election, a suggestion that lacks legal authority and could undermine confidence in an election that polls show him on course to lose.

Republican leaders in Congress, who often claim not to have seen Trump’s outlandish statements and tweets and who infrequently challenge him in public, promptly and vocally condemned any notion that the election would be moved.

It was a moment of striking political isolation for the president, as Republicans felt no need to defend him, Democrats condemned him, and three former presidents gathered in a rare moment together, paying tribute at the funeral of Rep. John Lewis of Georgia.

Trump is facing about as dire a runup to a presidential election as any incumbent could imagine: the worst quarter in the economy on record, an unceasing health crisis, protests nationwide and a country paralyzed by the lack of a financial recovery plan with no solution in sight — all compounded by his own inability to curtail his behavior.

His remarks on Twitter about the election delay — which he linked to his baseless claims about the potential for mail-in voter fraud — were one of the few clear signs that the president now realizes how deep a hole he has dug for himself in his reelection effort. Aides have described him as pained by the widespread rejection he is seeing in public opinion polls, even as he continues with self-sabotaging behavior rather than taking steps that might help him, like getting involved in negotiations for a deal on Capitol Hill to lift the economy.

“With Universal Mail-In Voting (not Absentee Voting, which is good), 2020 will be the most INACCURATE & FRAUDULENT Election in history,” Trump wrote. “It will be a great embarrassment to the USA. Delay the Election until people can properly, securely and safely vote???”

Trump later pinned the tweet at the top of his Twitter feed, ensuring people would continue to see it. Hours later, despite warnings from his campaign officials that delays are likely in tabulating results on Nov. 3, Trump said in a separate tweet, “Must know Election results on the night of the Election, not days, months or even years later!”

That second statement reflects a concern that Democrats have given voice to — that Trump will try to focus on the same-day voting tallies to claim victory, even when the full results may be unknown for days.

At a late-afternoon briefing with reporters, Trump defended the initial tweet, saying that he feared delays in counting votes. But he declined to elaborate on whether he was seriously proposing moving the election.

Trump posted the first tweet shortly after the Commerce Department announced that the gross domestic product for the second quarter of the year had fallen precipitously by 9.5%, reflecting the widespread shutdown of businesses beginning in March to combat the spread of the coronavirus.

Trump, who often tests the boundaries of his authority, has increasingly used public comments to lay groundwork for arguing that the election results are illegitimate if he loses. Though he does not have the constitutional authority to unilaterally change the date of the election, his tweet prompted a now-familiar round of assertions about what his true intention was with his statement.

With Trump, that is frequently a guessing game. The president has often posted remarks on Twitter that are aimed at sparking a reaction from people. At other times, he posts in reaction to what he sees on cable news shows. And sometimes he tries to change what those shows are focusing on with his tweets, offering a diversion.

Whatever his motivation Thursday, senior Republicans and an array of senators wanted no part of it, diverging from their standard practice of walking on eggshells after a Trump eruption.

“Never in the history of the federal elections have we not held an election, and we should go forward,” said Rep. Kevin McCarthy of California, the House minority leader and an enthusiastic supporter of Trump’s, adding that he understood “the president’s concern about mail-in voting.”

Sens. Ted Cruz and Marco Rubio, rivals for the 2016 Republican presidential nomination who have since become staunch Trump supporters, both dismissed the idea that the date for the election could change. Sen. Lindsey Graham, Trump’s foremost public defender in the Senate, said there would be a secure vote in November. And officials in key swing states showed little interest in engaging on the topic.

Cruz agreed. “I think election fraud is a serious problem,” he said. “But, no, we should not delay the election.”

People close to Trump said that the president has at times discussed with associates whether the election can be delayed, and has been told definitively that only an amendment to the Constitution could change the date. But his tweet was discomfiting to most of his aides, who tried to clean up his statement later by contending that he had been referring to the possibility that the outcome won’t be known until weeks after the election.

This is not the first time that Trump has raised the idea of thwarting rules or laws that he finds objectionable, and he often fails to follow through. He has repeatedly hurled threats, whether it is defunding universities or blocking federal aid to states, the substance of which he has no intent, or capacity, to fulfill.

The president, who did not serve in government before being elected to the highest office in the country, has never fully absorbed what powers he does and does not have, or how to wield his authority. What Trump has always been mindful of, dating to his time as a real estate developer, is the danger of being labeled a failure.

So in response to his weakened standing in the presidential race, Trump has been reaching for arguments to explain his difficulties this year, repeatedly noting how the virus undermined the booming economy for which he claims credit.

In this vein, any uncertainty about the balloting offers him an opening to raise questions about the legitimacy of his loss, regardless of whether he challenges the results. Trump-weary Republicans may make that a more difficult task, however.

Rep. Liz Cheney, R-Wyo., a sometime critic of the president who is eyeing the top ranks of the House leadership, said: “We are not moving the date of the election. The resistance to this idea among Republicans is overwhelming.”

Scott Jennings, a Republican strategist and an adviser to McConnell, called Trump’s statement “unfocused,” and “insecure,” saying it “separates him from his own party and most of mainstream political thought at a time when he needs to be fully focused on coronavirus, the economy, and defining Biden as out of the mainstream.”

“Republicans,” Jennings added, “have reacted correctly by rejecting the notion of delay.”

To Jennings and other Republican strategists, Trump is playing with fire by suggesting to his supporters that mail voting can’t be trusted, given that it may be the best option for some people in an era in which almost every activity has been changed to combat the virus’s spread. Making Republican voters distrust mail voting could negatively affect not just Trump, but a host of down-ballot candidates.

“The reality is,” Jennings said, “he needs every Republican vote there is, and he needs them any way he can get them, no matter how they are cast.”

The president has repeatedly railed against mail voting, creating outlandish scenarios of ballot theft to undermine confidence in the practice.

Even for Trump, suggesting a delay in the election was an extraordinary breach of presidential decorum that will increase the chances that he and his core supporters don’t accept the legitimacy of the election should he lose to former Vice President Joe Biden. Trump’s comments about the election looked all the more discordant coming just hours before the funeral for Lewis, a Democrat who as a young man was beaten and jailed as he advocated voting rights.

Without mentioning his successor by name, former President Barack Obama used his eulogy of Lewis to rebuke Trump.

Speaking from the pulpit of Atlanta’s Ebenezer Baptist Church, where Martin Luther King Jr. was reared and eventually preached, Obama lashed Trump for “even undermining the Postal Service in the runup to an election that’s going to be dependent on mail-in ballots so people don’t get sick.” For all the eye-rolling dismissals among Republicans, Trump’s remarks irritated and embarrassed his allies — and represented the latest illustration of how he is not only complicating his own campaign but also compounding his party’s challenge this fall.

Already burdened with an administration that only briefly attempted a full-scale response to a public health crisis that has sickened millions of Americans and killed over 150,000 while ravaging the economy, Republicans on the ballot are increasingly being undermined by Trump’s response to his misfortune.

Just this week, after he finally bowed to pressure to urge people to take virus safety measures, the president lamented how unpopular he is compared with his high-profile medical advisers.

And then he publicized an online video promoting an unproven virus treatment from a doctor who has previously opined on alien DNA and the impact of having sex with demons in one’s dreams.

His growing desperation to close the gap with Biden has also caused headaches for Republicans because he has increasingly employed race-baiting language that few in the party care to defend.

“I am happy to inform all of the people living their Suburban Lifestyle Dream that you will no longer be bothered or financially hurt by having low income housing built in your neighborhood,” he tweeted Wednesday.