Trump Denounces Justice Dept. as Investigations Swirl Around Him 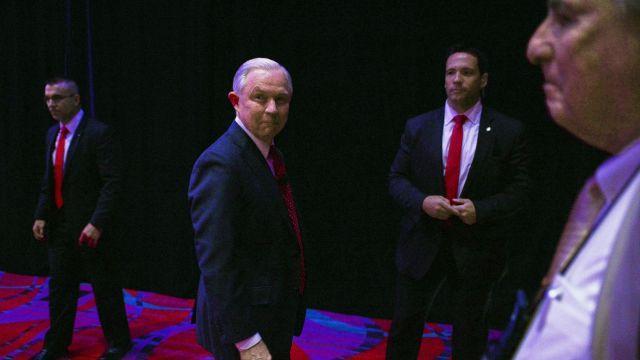 WASHINGTON — President Donald Trump blamed the Justice Department on Thursday for the investigations surrounding him, criticized the deal struck with his former lawyer Michael Cohen and lashed out at Attorney General Jeff Sessions, who countered with a rare public rebuke of the president.

Trump also praised Paul Manafort, his former campaign manager who was convicted of financial fraud this week, for refusing to cooperate with the Justice Department and said that plea agreements, an essential tool for prosecutors, should maybe be outlawed.

“It’s called flipping, and it almost ought to be illegal,” Trump said in an interview that aired on Fox News.

Asked whether he was considering firing Sessions, the president only reiterated his long-standing objection to Sessions’ recusal from the Russia investigation and his insistence that he would have chosen another person for attorney general had he known someone else would oversee the inquiry. “He took the job and then he said, ‘I’m going to recuse myself,' ” Trump said of Sessions. “I said, ‘What kind of a man is this?' ”

In an implicit but pointed reply, Sessions warned the president not to intrude on federal law enforcement. “While I am attorney general, the actions of the Department of Justice will not be improperly influenced by political considerations,” he said in a statement issued shortly before he met with Trump at the White House about criminal justice overhaul.

“Jeff, this is GREAT, what everyone wants, so look into all of the corruption on the ‘other side,'” Trump wrote in a pair of Twitter posts early Friday morning. “Come on Jeff, you can do it, the country is waiting!”

Trump listed people and political enemies who he believes deserve the attention of the Justice Department, including the targets of conservative conspiracy theories that claim the Russia investigation was motivated by politics.

The exchanges escalated the public war Trump has waged for more than a year on the Justice Department, training most of his fire on the special counsel investigation. Sessions’ response, his most forceful public pushback yet on Trump, showed the treacherous political terrain he is navigating: appointed by a president who has made apparent that he views law enforcement as loyal protectors but overseeing a Justice Department that views independence from political pressure as essential to the rule of law.

Sessions’ pushback came on a day of potentially damaging revelations for the president about the special counsel and Cohen inquiries. A longtime friend and the publisher of the National Enquirer, David J. Pecker, was given immunity to detail Cohen’s crimes and Trump’s role, a person familiar with the investigation confirmed. Trump’s lawyers also revealed they warned him against even considering pardons for Manafort or other former aides, at least for now, opening Trump to accusations of tampering.

Republicans on Capitol Hill stood firm behind Sessions, who spent two decades as a senator, publicly cautioning Trump against firing him. They cited a packed calendar and lack of confirmable replacements for a closely divided Senate where Democrats are watching vigilantly for any moves by the president that could undermine the Russia investigation.

“We don’t have time, nor is there a likely candidate who could get confirmed in my view under the current circumstances,” said Sen. John Cornyn of Texas, the chamber’s No. 2 Republican. Sen. Susan Collins of Maine, a key Republican swing vote, warned that removing Sessions because of his recusal from the Russia investigation “certainly would not be a wise move.” A spokesman for the majority leader, Sen. Mitch McConnell of Kentucky, said he was not aware of any change in the leader’s support for Sessions.

There were signs of softening, too, mainly from Sen. Charles Grassley, R-Iowa, the head of the Judiciary Committee. Grassley has warred with Sessions over one of his top policy priorities, a comprehensive bipartisan criminal justice overhaul also championed by the president’s son-in-law and senior adviser, Jared Kushner. Grassley has said he believes Sessions has led opposition within the administration to the legislative package.

During Thursday’s meeting at the White House, the president held off on backing the proposal at least until after November’s midterm elections, concluding that an endorsement now carried too much political risk, according to a senior White House official who was not authorized to disclose the private discussions and spoke on the condition of anonymity.

“The president remains committed to meaningful prison reform and will continue working with the Senate on their proposed additions to the bill,” Hogan Gidley, a White House spokesman, said in a statement.

Trump’s decision notably aligned him with Sessions, at least in the short term, and Grassley signaled his displeasure with the attorney general’s interference by suggesting he would be open to confirming a possible replacement for him. “I’ve got time for hearings this fall,” he told reporters. He had protected Sessions last year amid rumors of his firing by saying that the Senate would not make room for confirmation hearings for a new attorney general.

Sen. Lindsey Graham, R-S.C., also hedged his support for Sessions, noting it was obvious Sessions had lost the president’s confidence and that he did not necessarily object to Trump replacing him under the right circumstances after the midterm elections. Graham had previously said Trump would have “holy hell to pay” if he fired Sessions. Trump, who tends to be far less confrontational with perceived foes in private settings, was cordial with Sessions at their meeting on criminal justice overhaul. Neither man brought up their barbed exchange, according to two senior administration officials who attended the meeting and spoke on the condition of anonymity to describe private conversations.

Sessions followed the president’s lead in the meeting, the officials said. The two agreed on several points made by advisers on prison reform. For example, if the legislation moves forward, both men agreed that they would want to increase the sentencing penalty for drug cases that involve fentanyl. In the past, both have recommended putting some drug dealers to death.

After the meeting, Kushner sped to Capitol Hill to meet with Grassley, McConnell and Cornyn to try to find a path forward for the legislation.

Trump, who had been relatively subdued in the day or so after Cohen’s and Manafort’s convictions, had grown enraged by Wednesday night, according to people who spoke to him.

The president privately vented to associates that he was furious with Sessions for failing to protect him in the way he believes Attorney General Eric Holder Jr. had protected President Barack Obama.

Trump wanted to rebut Sessions’ statement Thursday on Twitter, but his advisers stopped him, according to people briefed on the matter, at least into the evening.

He also complained during his Fox interview that the campaign finance crimes Cohen admitted committing at his direction were “tiny ones,” or “not even crimes.”

The president’s comments showed that his feud with federal law enforcement has taken on a new urgency.

“What is different now is that the Justice Department noose is tightening around the president’s neck,” said Jack L. Goldsmith, a Harvard law professor who headed the Justice Department’s Office of Legal Counsel under President George W. Bush. “That context makes this confrontation more significant, for it might indicate that the president is finally going to follow through on his threats and insinuations, over many months, about firing Justice Department officials or taking other actions against the Mueller investigation.” Grassley also reached out on Thursday to lawyers representing Cohen, inviting him to testify privately before the Senate Judiciary Committee. Republicans on the panel have led an intermittent investigation of the Trump campaign’s ties to Russia but have not sought new witness testimony in months.