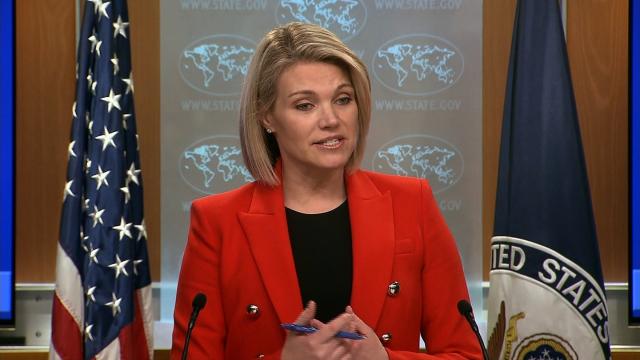 (CNN) — President Donald Trump is expected to nominate State Department spokeswoman Heather Nauert to be his new ambassador to the UN, positioning a relatively inexperienced newcomer in one of the most high-profile positions in US diplomacy, according to an administration official and a second source.

The announcement is expected to come on Friday, two officials say.

In an administration rife with internal conflict and deeply distrustful of the UN, Nauert's nomination would place a less senior person at the international agency than outspoken current ambassador Nikki Haley, who reportedly sparred with other administration officials.

The former Fox News host's precipitous rise since arriving at the State Department in 2017 sets the stage for a potentially tough Senate confirmation hearing, where Democrats will likely grill Nauert on her qualifications for the position.

Nauert's appointment would realign power dynamics within the President's national security team. Pompeo has told aides he wants the UN position downgraded from the Cabinet-level job Haley had insisted on, an official familiar with his remark told CNN. Elevating Haley to a Cabinet level post broke with the tradition of previous Republican administrations.

National security adviser John Bolton has been said to want the role downgraded as well, according to people familiar with his thinking. A former UN ambassador himself, Bolton has taken an interest in some UN matters, such as the International Criminal Court.

The shift means Nauert would wield less clout than her predecessor, both at the UN and within the administration, and as a result, would pose nowhere near the challenge to Bolton, White House chief of staff John Kelly or Pompeo.

The nomination was first reported by Bloomberg News.

Experience matters less to the President, an avid fan of Fox News, than Nauert's loyalty to the White House, the fact that she's a woman and her ability to be a polished proxy on television, according to sources familiar with his thinking.

While Nauert struggled during the tenure of former Secretary of State Rex Tillerson -- so ostracized from his inner circle that she considered quitting -- she could now bring to the UN close ties to the White House and a good working relationship with Secretary of State Mike Pompeo.

During Pompeo's tenure, she has been able to travel on official trips -- something Tillerson blocked her from doing -- and rose to temporarily hold the position of acting under secretary for public diplomacy and public affairs.

The senior administration official said Nauert has "extensive experience in this administration in foreign policy and in representing the President's goals."

Despite Nauert's TV savvy, however, current and former colleagues wonder if she will be prepared or equipped to navigate the gritty behind the scenes work of UN negotiations.

She would be taking the position amid a roster of thorny global challenges, ranging from North Korea's nuclear program to Yemen's famine and the growing divide between the US and its closest allies over the Iran nuclear deal, climate change and other issues.

She would also pick up the baton amid a US retrenchment from the world body, with Washington pulling out of different agencies and cutting or reducing funding for others.

Critics were harsh about the nomination.

"Heather Nauert brings no experience, no understanding and, frankly, no interest in learning," said Brian Dixon, a senior vice president at Population Connection Action Fund, an organization focused on access to international family planning. "Her main claim to this role is her willingness to defend the indefensible as a spokesperson. It's hard to believe that this president could further diminish the view of the United States in the world, but this appointment is likely to do it."

At the UN, Nauert is seen as a cipher. "People don't know very much about her," said Richard Gowan, a senior fellow at the UN University. "People are cautious."

"If Nauert is nominated and approved, people will be interested to see whether she's willing and able to do the diplomatic toil or whether she will see this as an extension of the spokesman position and focus more on presentation of US position before the Security Council," said Gowan.

The Illinois native would follow in the footsteps of Haley, a former governor of South Carolina; Samantha Power, a Pulitzer Prize winner; Susan Rice, a Rhodes Scholar; and former National Security Council and national security officials such as Madeleine Albright. If Nauert is confirmed for the job, it would cap a precipitous rise in diplomacy in less than two years.

Early in her career, Nauert worked as a health insurance consultant, according to the State Department, which says she studied at Mount Vernon Seminary and College, a private women's college in Washington DC, and Columbia University's journalism school.

Nauert joined the Trump administration after more than 20 years in journalism spent largely at Fox News, where she led breaking news coverage for "Fox & Friends," with a brief stint as a general assignment reporter at ABC.

UN diplomats say that behind the scenes negotiations are central to an ambassador's job, and that presentation skills are also important.

"The personal dimension is pretty important and you're dealing with some pretty tough customers, the Russians in particular," said Gowan. He noted that "people were slightly denigrating about Haley too, because of her relative lack of experience and the general view is that she did quite well."

"No one wants to prejudge how Nauert will perform," he adds, noting that "she'll be working with a pretty professional team and if Nauert is willing to trust the diplomats, they will have her back."

"With Pompeo more firmly in control and Bolton focused on his anti-multilateral agenda, there's a sense the US ambassador will have less clout," Gowan said.

There is some relief at the UN that Trump did not pick another name on his short list of candidates: Richard Grenell, the US ambassador to Germany, is a close ally of Bolton's, having served as US spokesman at the UN while Bolton was ambassador there.

"To be blunt, it's seen as a win simply that it's not Grenell," who is known to share Bolton's "pugilistic approach" to international institution, Gowan said. "Grenell is known to be difficult to work with. Nauert is a cipher as far as most UN diplomats are concerned."

In the end, though, it might not matter who is ambassador, Gowan said. "What we've really discovered over the last two years is that even when you have a relatively mainstream, relatively collegial, relatively influential ambassador to the UN like Haley, that only buys you a limited degree of protection from a president like Trump."