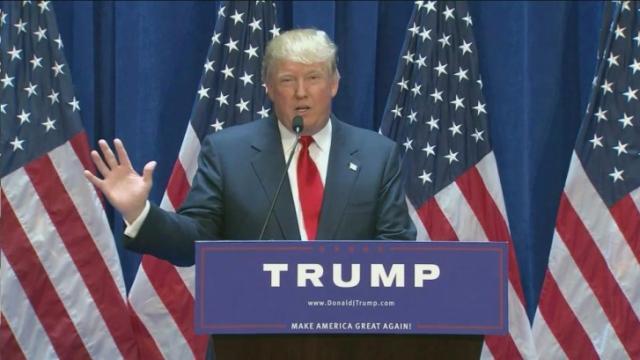 Raleigh, N.C. — Sometimes you need to read the fine print. The product looks reasonable, but you're going to dislike the ingredients.

Such is the case for a recent Survey USA poll indicating Republican front-runner Donald Trump is slightly preferable compared to Democratic front-runner Hillary Clinton in a hypothetical November 2016 matchup. One way to gain or lose confidence in a poll result is to examine "the internals," or how sub-groups are behaving.

According to the Survey USA poll, Trump leads Clinton 45 percent to 40 percent among registered voters, with 16 percent undecided. While that result is certainly possible, the results broken down by respondents' race raise questions.

Survey USA found that 25 percent of African-Americans say they would vote for Trump rather than Clinton. Let's put that percentage into perspective. All Democratic nominees for president, white or President Obama, have won about 90 percent or more of the African-American vote in the last 50 years. There are no reasons to think that will change next year.

Curiously, that same poll found 31 percent of Hispanics would vote for Trump over Clinton. I'm not sure it is reasonable to expect about one-third of Hispanics to vote for the Trump, especially since Republican Mitt Romney won just 27 percent of the Hispanic vote in 2012. Why would Trump equal or exceed that figure? 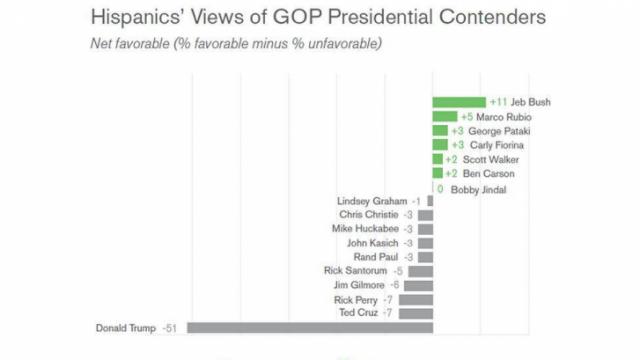 Trump has been heavily criticized in Hispanic media for his claims about immigration. He is openly mocking GOP rival Jeb Bush for speaking Spanish at election events. And he is the same candidate, according to a recent NBC/Wall Street Journal poll, that is disliked by a whopping 75 percent of Hispanics – just 16 percent of Hispanics reported having a favorable opinion of Trump in that poll. According to Gallup, Trump's has a massive negative 51 percentage point net favorability rating among Hispanics, which is more than 40 points worse the next most disliked Republican candidate, Sen. Ted Cruz.

So, is Trump really ahead of Clinton? The overall Survey USA results are not radically different from all other recent polls. But the election isn't held today, nor tomorrow or any day soon. You shouldn't give too much credence to a general election poll this far away from November 2016.

No, I don't either, but he was the "presumed front-runner" for the GOP nomination around this time in 2007. Sen. John McCain went on to win the nomination in 2008. And don't forget, Clinton was supposed to be the Democratic Party's nominee in 2008 – thanks Obama. Most Americans are not yet engaged with the political process, and they barely know most of the potential candidates, so their answers aren't stable, and they aren't the same people who will actually vote.

I don't know why this poll has overall findings similar to other ones when their results by race are, at best, highly questionable. One possibility is that Survey USA has polled non-whites who are less likely to be Democrats than in reality. Republicans tend to vote for Republicans, after all, and vice versa. Another possibility is that non-whites are "punking" the poll, deliberately reporting attitudes they don't honestly hold. I have no evidence that is happening. The real mystery, though, is why Trump isn't leading by more on that poll, if those results for non-whites are accurate.