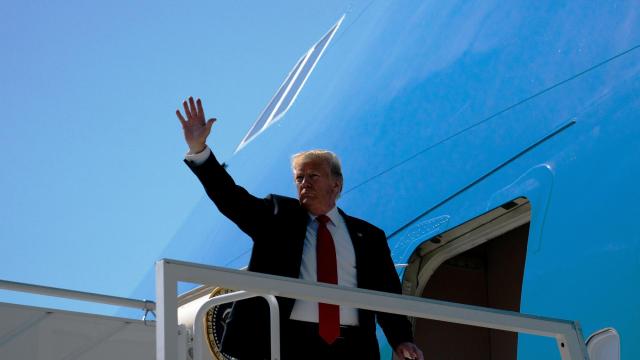 WASHINGTON — President Donald Trump on Friday said he would delay a decision on whether to impose tariffs on automobiles imported from Europe, Japan and other countries for six months, setting a tight deadline for the United States to reach trade agreements that have so far proved elusive.

Trump determined that imports of foreign cars and car parts were causing harm to the American automobile industry and threatening national security and said other countries had 180 days to address the problem through trade agreements with the United States.

If agreements “to address the national security threat” are not reached, Trump said he would determine “whether and what further action needs to be taken,” a step that could include imposing 25% tariffs on foreign cars.

The decision offers a temporary reprieve to global automakers and auto suppliers, which had been bracing for punishing tariffs on the more than 8 million cars imported into the United States each year. But it sets up a tense six-month period for the White House to reach trade deals with other nations that have already been complicated by mistrust and disagreements.

The United States has struggled to make headway in preliminary negotiations with the European Union, which has balked at Trump’s demands to allow more agricultural products like chicken and cheese into Europe. Trump previously rejected a more straightforward proposal from Europe to simply scrap automotive tariffs on both sides of the Atlantic. And talks with Japan have yet to move beyond the initial stages.

A decision to impose auto tariffs would have been Trump’s most aggressive trade measure yet. His administration has already imposed stiff levies on steel and aluminum and $250 billion worth of Chinese goods. But a tariff on cars and car parts was seen as an economically damaging escalation in the president’s quest to revise trade terms to benefit the United States.

Charles E. Grassley, a Republican senator from Iowa, said in a statement that he was “glad” the president had decided to delay these tariffs and that he would continue to work on legislation that would give Congress the ability to stay the president’s hand on levies like these.

“As the president knows, I’m not a fan of tariffs. And I have serious questions about the legitimacy of using national security as a basis to impose tariffs on cars and car parts,” Grassley said.

Car companies and industry groups said a delay did not go far enough and said the ongoing threat of tariffs could hurt the automotive sector.

“The continued threat of tariffs on cars and auto parts only creates more uncertainty weakening our economy,” said Neil Bradley, the executive vice president of the U.S. Chamber of Commerce.

While the prospect of a 25% tariff provoked an outcry from both industry and foreign governments, that opposition did not appear to be the primary reason behind the Trump administration’s decision.

Instead, U.S. officials believed it was not the right time to pursue the tariffs, given fractious trade negotiations with China, which have nearly collapsed, as well as a continuing effort to pass the revised North American trade agreement into law.

Trump has promised to rewrite trade deals in America’s favor, but the administration has struggled to make good on that promise. Lawmakers have resisted ratifying the new NAFTA, called the United States-Mexico-Canada Agreement, with both Democrats and Republicans raising concerns about the pact. Lawmakers have insisted that the White House remove metal tariffs on Canada and Mexico as part of the deal, arguing that the levies, while aimed abroad, are hurting American farmers, businesses and consumers.

To help get the USMCA through Congress, the White House was preparing to announce agreements with Canada and Mexico, perhaps as early as Friday, that would adjust the tariffs that the Trump administration had imposed on steel and aluminum, people familiar with the matter said.

The president has made heavy use of tariffs as a cudgel to both extract concessions from trading partners and limit the influx of foreign goods into the United States. But the tariffs rest on a controversial and little-used legal provision that gives the president broad authority to limit imports to protect the national security of the United States. Trump’s Friday proclamation said a Commerce Department investigation concluded that imports of autos and certain auto parts threatened to impair the national security of the United States. It mentioned innovations in the automotive sector, including autonomous driving and engine technology, saying that the rapid application of such commercial breakthroughs was “necessary for the United States to retain competitive military advantage.”

“Automotive technological superiority is essential for the national defense,” the White House proclamation said. “In light of all of these factors, domestic conditions of competition must be improved by reducing imports.”

But many outside the administration have criticized the linkage of cars with national security, saying that view of national security is overly broad, and pointing out that the bulk of U.S. auto imports come from the country’s closest allies. Mexico, Japan, Canada, Germany and South Korea were together responsible for more than 85% of U.S. automotive imports in 2018.

“The idea that U.S. automakers are threatened by automotive imports is fundamentally flawed and ill conceived,” said John Bozzella, the president of Global Automakers, which represents foreign car brands. “No automaker or auto parts supplier asked for this ‘protection.’”

Economists and industry analysts have argued that the tariffs would raise the cost of American cars and weigh on the U.S. economy. The Center for Automotive Research, a research group partly funded by the industry, estimated the measures could increase the price of a new vehicle by $455 to $6,875, depending on the specific policy taken.

At a hearing last July on the tariffs, every witness present, including representatives of foreign governments, car companies, parts makers and dealerships, testified in opposition to the measure. The only exception was the United Automobile Workers union.

Jennifer Kelly, the union’s research director, said that the tariffs could address real problems with U.S. automotive factories moving offshore, but that “rash actions” might also have “unforeseen consequences, including mass layoffs of American workers.” Daniel Price, a former economic official in the George W. Bush administration, said the White House proclamation Friday made a “stunning assertion” that automotive manufacturing and research and development only contributes to the economy and national security if it is performed by a company that is American-owned.

Foreign automotive companies, including BMW and Mercedes, have invested tens of billions of dollars in states including Ohio, Indiana, South Carolina, Alabama and Mississippi, he said, but “the proclamation thus sends a message to foreign automakers that their investment is not welcomed or valued.”

Trump has repeatedly criticized Europe for flooding the U.S. market with cars while limiting imports of American vehicles, and he has called for revised trade terms that make the relationship more fair.

American and European negotiators have been in talks for nearly a year in an attempt to resume trade negotiations between the governments. European officials have been eager to evade tariffs on automobiles, which would hit Germany especially hard. But talks have proceeded slowly, with the two sides sparring over whether agriculture will be part of the deal.

The Trump administration wants Europe to buy more U.S. farm products, like meat and dairy, and says a deal without agriculture will not pass Congress. But Europe insists that agriculture is not on the table.

“We will continue working constructively with our U.S. partners on the basis of the mandates given to us by the EU Council of Ministers,” the European Commission said in a statement. “We are convinced that a strong and balanced trans-Atlantic relationship on the basis of reciprocity is a win-win situation for both. Neither the U.S. nor the EU can have an interest to enter a trade conflict.”

Reaching a deal with Europe in six months could be difficult, especially given elections for the European Parliament next week are expected to strengthen protectionist parties on both the left and the right. Leaders of the Green coalition in Parliament say they will not sign trade agreements with countries that have not ratified the Paris climate change accord, which Trump has pulled out of.

Trump’s statement suggested he will demand quotas or other restrictions on car imports, which could violate World Trade Organization rules.

“That would hardly be acceptable to the EU,” the German industry association known as VDMA, which represents machinery makers that supply the auto industry, said in a statement Friday. “That would raise the risk that negotiations over a limited free trade agreement would be over before they began.”

The United States and Japan have also been discussing a bilateral trade deal that could give American farmers more access to Japan’s market. But those talks, which began nearly two years after Trump pulled out of a multilateral trade deal with Japan known as the Trans-Pacific Partnership, are at an early stage.

Speaking to reporters Friday in Tokyo, he said he told Lighthizer that Japan would object to such import controls. “Japan has repeatedly told the U.S. side that it opposes such measure to distort open and fair trade,” Motegi said.

Motegi said that Lighthizer assured him that the United States would not restrict the volume of cars that Japan exports to America. “I confirmed with the U.S. side that they wouldn’t seek such a measure,” he said.

Japanese officials say that they are counting on the close relationship between Trump and Prime Minister Shinzo Abe to keep trade negotiations from souring between the two countries. Trump is scheduled to visit Japan next week, and his hosts are planning a full slate of high-level hospitality, including a state dinner with the new emperor and empress, rounds of golf, and a visit to a sumo wrestling championship, where Trump will award the winner’s trophy.

A spokesman for the U.S. trade representative declined to specify Friday whether Canada, Mexico and South Korea had been exempted from the auto tariffs.

He said that the president had directed his advisers to negotiate agreement with “any countries” that would be appropriate to address the national security threat, but that the administration had already taken “significant steps to help address the detrimental effect of auto-related imports from both Canada and Mexico.”

“On Korea, the administration has a long-standing policy of not negotiating in public and, at this time, we cannot comment further on the scope of these negotiations,” the spokesman said.