Trump Defends Pursuit of Russia Deal in 2016 as ‘Very Legal’ 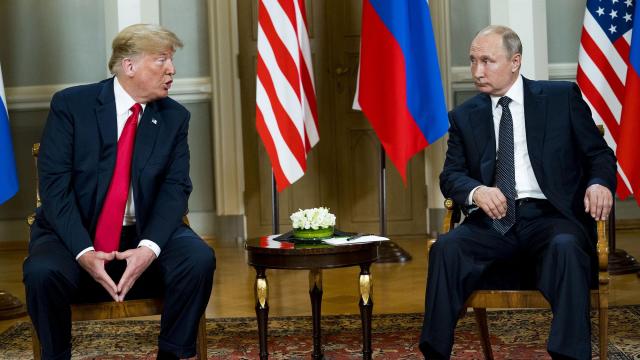 WASHINGTON — President Donald Trump woke up in balmy Buenos Aires early Friday, but his mind was back in Washington as he defended his decision to continue pursuing business deals as he ran for president in 2016, including looking “lightly” at constructing a building in Russia.

“Oh, I get it! I am a very good developer, happily living my life, when I see our Country going in the wrong direction (to put it mildly). Against all odds, I decide to run for President & continue to run my business-very legal & very cool, talked about it on the campaign trail,” Trump wrote. “Lightly looked at doing a building somewhere in Russia. Put up zero money, zero guarantees and didn’t do the project. Witch Hunt!”

The president’s Twitter defense came a day after his former lawyer Michael Cohen admitted in court that he had lied to Congress about the extent of the Trump Organization’s pursuit of an agreement to build a tower in Moscow. Cohen said that, to help Trump politically, he had falsely testified that the Russia efforts had been dropped by January 2016, when they had in fact continued until June. By that point, Trump had clinched the Republican presidential nomination.

The tweets echoed what one of Trump’s personal lawyers, Rudy Giuliani, said a day earlier about the prospective Russia deal. Giuliani said that Trump’s written answers to questions posed by special counsel Robert Mueller were consistent with what Cohen said in court Thursday.

“The president said there was a proposal, it was discussed with Cohen, there was a nonbinding letter of intent and it didn’t go beyond that,” Giuliani said Thursday.

The president’s answers, submitted to the special counsel this month, have not been made public. But Cohen’s latest version of events raised questions about whether Trump had been truthful with Mueller’s team. The president’s veracity with the special counsel has taken on greater import as his team has pursued charges against a string of witnesses for lying to investigators.

At issue is how long into the presidential campaign the Moscow opportunity was under consideration — at the time, questions were swirling about Trump’s desire for friendlier ties to Russia. In 2016, Moscow was conducting a clandestine effort aimed at getting Trump elected, and Mueller is investigating whether the Trump campaign conspired in those efforts.

Speaking to reporters Thursday as he left Washington for an economic summit in Buenos Aires, Trump said Cohen was weak and had lied to prosecutors so that he could get a reduced sentence for other crimes he has pleaded guilty to.

The president told reporters he did not know exactly when the Russia discussions had ceased, but he said his recollection was early in 2016.

“We decided — I decided ultimately — not to do it,” Trump said, adding, “There would have been nothing wrong if I did do it.”

Giuliani called Cohen a liar. “He has so many different versions of the same stories, so by definition he is a liar and we can’t trust him,” Giuliani said. “Given the fact that he’s a liar, I can’t tell you what he’s lying about.”