Trump says both sides to blame amid Charlottesville backlash 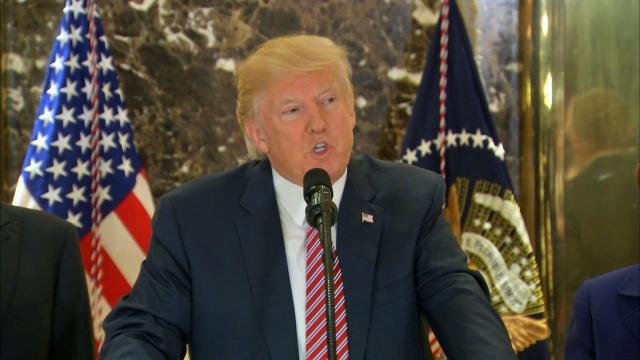 President Donald Trump, in a staggering, impromptu news conference in New York on Tuesday, blamed the violence in Charlottesville, Virginia, over the weekend on both sides of the conflict -- equating the white supremacists on one side with the "alt-left" on the other side -- after his top White House aides spent days trying to clean up after Trump's initial vague response to the violence.

The news conference laid bare his unvarnished view of who was to blame for the violence and what he thinks about the nationwide effort to remove statues of Confederate leaders. Trump's comments were the latest in what has been a jaw-dropping saga ever since the President made his first vague statement on the violence, blaming the conflicts on "many sides." The comments also made clear that Trump's speech on Monday -- which vociferously blamed the violence on the "alt-right" and neo-Nazi groups who initiated the protest -- was largely a sterilized version of his view.

"I think there is blame on both sides," Trump said during a contentious back-and-forth with reporters in the lobby of his Midtown Manhattan building.

RELATED: Heather Heyer died 'fighting for what she believed in'

On Saturday, as violence in Charlottesville played out on national television, Trump blamed "many sides" for the conflict. Though that answer was quickly panned by Democrats and Republicans alike, Trump remained silent on Sunday, leaving it to his aides to try to clean up his vague answer. Trump, after mounting pressure that was palpable inside the White House, spoke Monday condemned the white supremacists and neo-Nazis at the heart of the violence.

On Tuesday, though, Trump defended his 48-hour delay in denouncing white supremacists, arguing that he took his time because he didn't know the facts.

"I wanted to make sure, unlike most politicians, that what I said was correct, not make a quick statement," Trump said, calling his initial comment a "fine statement."

He added: "I don't want to go quickly and just make a statement for the sake of making a political statement."

The President subsequently called the driver of the car that drove through a crowd, killing one woman, a "murderer" then once again blamed both sides for the violence.

A senior White House official says chief of staff John Kelly and other top advisers hoped the President would turn a corner Tuesday and talk about infrastructure, but concedes they were entirely wrong.

"That was all him -- this wasn't our plan," the official said, speaking confidentially about internal deliberations.

The President has been fuming in closed-door meetings about what he sees as unfair coverage and those feelings played out on Tuesday.

Same aides gleefully watched as Trump slammed the "fake news," but Kelly stood off to the side as Trump spoke, his face stern and his arms crossed.

Trump said there were some "very bad people" on both sides, but that there was some who came out to protest the removal of Robert E. Lee's statue who were "fine people."

"You had people in that group that were there to protest the taking down, to them, of a very, very important statue and a renaming of a park from Robert E. Lee to another name," Trump said.

Pressed by reporters, Trump raised Washington and Jefferson, arguing there could be a slippery slope.

He added: "You know, you really do have to ask yourself, where does it stop?"

Trump's slippery slope argument is straight out of the 'alt-right' playbook.

Corey Stewart, an 'alt-right' leader and the former Republican gubernatorial candidate turned Senate candidate in Virginia, tweeted in response to Trump on Tuesday, "They won't stop until all of American history is erased."

After leaving the podium, Trump was asked whether he planned to go to Charlottesville. His response, "Does anyone know I own a house in Charlottesville?"

Trump was referring to his winery in the city.

"I mean I know a lot about Charlottesville," he said. "Charlottesville is a great place that has been very badly hurt over the last couple of days."

He added: "I own actually one of the largest wineries in the United States, it is in Charlottesville."