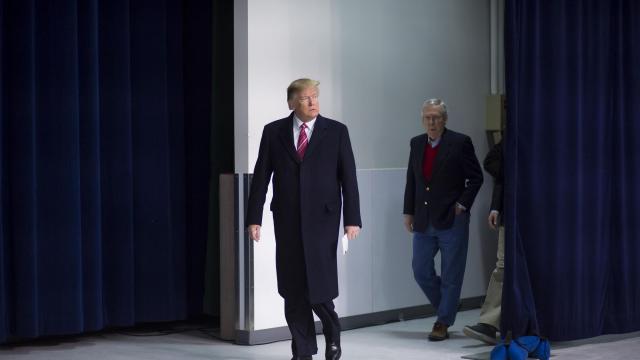 WASHINGTON — President Donald Trump, whose sometimes erratic behavior in office has generated an unprecedented debate about his mental health, declared on Saturday that he was perfectly sane and accused his critics of raising questions to score political points.

In a series of Twitter posts that were extraordinary even by the standards of his norm-shattering presidency, Trump insisted that his opponents and the news media were attacking his capacity because they had failed to prove that his campaign conspired with Russia during the 2016 presidential campaign.

“Now that Russian collusion, after one year of intense study, has proven to be a total hoax on the American public, the Democrats and their lapdogs, the Fake News Mainstream Media, are taking out the old Ronald Reagan playbook and screaming mental stability and intelligence,” he wrote on Twitter even as a special counsel continues to investigate the Russia matter.

“Actually, throughout my life, my two greatest assets have been mental stability and being, like, really smart,” he added. He said he was a “VERY successful businessman” and television star who won the presidency on his first try. “I think that would qualify as not smart, but genius....and a very stable genius at that!”

Elaborating during a meeting with reporters at Camp David later in the day, Trump again ticked off what he called a high-achieving academic and career record. He raised the matter “only because I went to the best colleges, or college,” he said. Referring to a new book citing concerns about his fitness, he said, “I consider it a work of fiction and I consider it a disgrace.”

The president’s engagement on the issue is likely to fuel the long-simmering argument about the president’s state of mind that has roiled the political and psychiatric worlds and thrust the country into uncharted territory. Democrats in Congress have introduced legislation to force the president to submit to psychological evaluation. Mental health professionals have signed a petition calling for his removal from office. Others call armchair diagnoses a dangerous precedent or even a cover for partisan attacks.

In the past week alone, a new book resurfaced previously reported concerns among the president’s own advisers about his fitness for office, the question of his mental state came up at two White House briefings and the secretary of state was asked if Trump was mentally fit. After the president boasted that his “nuclear button” was bigger than Kim Jong Un’s in North Korea, Richard W. Painter, a former adviser to President George W. Bush, described the claim as proof that Trump is “psychologically unfit” and should have his powers transferred to Vice President Mike Pence under the Constitution’s 25th Amendment.

“The level of concern by the public is now enormous,” said Bandy X. Lee, a forensic psychiatrist at Yale School of Medicine and editor of “The Dangerous Case of Donald Trump: 27 Psychiatrists and Mental Health Experts Assess a President,” a book released last fall. “They’re telling us to speak more loudly and clearly and not to stop until something is done because they are terrified.”

As Politico reported, Lee was invited to Capitol Hill last month to meet with about a dozen members of Congress to discuss the matter. But all but one of the lawmakers she briefed are Democrats. While some Republicans have raised concerns, they do so mostly in private. Others scoff at the question, dismissing it as outrageous character assassination.

Few questions irritate White House aides more than inquiries about the president’s mental well-being, and they argue that Trump’s opponents are trying to use those questions to achieve what they could not at the ballot box.

“This shouldn’t be dignified with a response,” said Kellyanne Conway, the White House counselor.

“The partisans on Capitol Hill consulting with psychologists should reorient their spare time: support the president’s positive agenda of middle class tax cuts, rebuilding infrastructure and the military, investing in our workforce,” Conway said later in an email. “The never-ending attempt to nullify an election is tiresome; if they were truly ‘worried about the country,’ they’d get to work to help it.”

Thomas J. Barrack, a friend of Trump’s, was quoted in Michael Wolff’s new book, “Fire and Fury: Inside the Trump White House,” as telling a friend that the president was “not only crazy but stupid.” In interviews, Barrack denied that and insisted that many people miss Trump’s actual brilliance.

“POTUS has learned over time that Socratic testing and a lack of predictability is a worthy weapon in both negotiations and in keeping his team well honed, unentitled and on alert,” he said, using the initials for president of the United States. “He has no truck with political correctness, self-promotion or personal hubris of his team. This may cause him to appear at times to be overly realistic, blunt or to be politically insensitive even to his own subordinates. However, that is not the case.”

Still, in private, advisers to the president have at times expressed concerns. In private conversations over the last year, people who were new to Trump in the White House, which was most of the West Wing staff, have tried to process the president’s speaking style, his temper, his disinterest in formal briefings, his obsession with physical appearances and his concern about the theatrics and excitement of his job.

In conversations with friends, Jared Kushner, the president’s son-in-law and senior adviser, has said Trump is “crazy but he’s a genius.” Other advisers speak about the president as a volatile personality who has to be managed carefully. While Wolff’s book generated enormous attention, news accounts over the past year have reported the president’s mood swings and unpredictable behavior.

The questions have prompted a sharp debate among mental health professionals about the so-called Goldwater rule adopted by the American Psychiatric Association barring members from evaluating anyone they have not personally examined, a rule generated in response to questions raised about Sen. Barry Goldwater, the Republican presidential nominee in 1964.

Trump is due for his annual physical examination on Friday, but the White House would not say whether it would include mental acuity tests. Some psychiatrists have said it is irresponsible to throw around medical terms without an examination.

“These amateurs shouldn’t be diagnosing at a distance, and they don’t know what they’re talking about,” said Allen Frances, a former psychiatry department chairman at Duke University School of Medicine who helped develop the profession’s diagnostic standards for mental disorders.

Frances, author of “Twilight of American Sanity: A Psychiatrist Analyzes the Age of Trump,” said the president’s bad behavior should not be blamed on mental illness. “He is definitely unstable,” Frances said. “He is definitely impulsive. He is world-class narcissistic not just for our day but for the ages. You can’t say enough about how incompetent and unqualified he is to be leader of the free world. But that does not make him mentally ill.” Questions about presidential psychology are not new but have largely been shrouded in secrecy until now. Abraham Lincoln suffered from depression. John F. Kennedy secretly took prescription medicines to treat anxiety. Aides to Lyndon B. Johnson were so troubled that they sought out three psychiatrists, who concluded that his behavior could indicate paranoid disintegration.

Richard M. Nixon took Valium, and during his final days advisers took precautions intended to avoid any rash orders for military action. Late in his tenure, Ronald Reagan’s aides, concerned enough about his mental state, discussed whether to invoke the 25th Amendment. Only years later was Reagan diagnosed with Alzheimer’s disease.

While Trump cited Reagan’s case in his tweet, the discussion of his capacity was far more restrained in public back then. Reporters who covered him, like Ann Compton of ABC News and Peter Maer of CBS News, said they knew he was a visibly aging, sometimes hazy man who struggled with facts. But there was less direct public questioning of his mental health until his final year in office with publication of a book disclosing the aides’ 25th Amendment debate.

Public discussion of mental issues has long been a political liability. Sen. Thomas F. Eagleton withdrew as the Democrats’ vice-presidential candidate in 1972 after revelations that he had undergone electric shock therapy. Gov. Michael S. Dukakis, the Democratic presidential nominee in 1988, was forced to release records to dispute rumors that he had received psychiatric treatment. Bill Clinton’s aides were grilled on whether he was being treated for sex addiction.

Trump’s capacity has been discussed openly since the 2016 campaign. Sen. Rand Paul of Kentucky, then a rival for the nomination, called him a “delusional narcissist.” Sen. Lindsey Graham of South Carolina, another Republican candidate, said: “I think he’s a kook. I think he’s crazy. I think he’s unfit for office.”

But fewer Republicans are willing to say that now that Trump is in office. Indeed, Graham in November chided the news media for trying “to label the guy some kind of kook not fit to be president,” even though he had said the exact same thing a year earlier.

One exception has been Sen. Bob Corker of Tennessee, who said Trump had yet to “demonstrate the stability” required of a president. For his part, Trump has accused his critics of being mentally impaired. He regularly describes adversaries with words like “crazy,” “psycho” and “nut job.”

But the discussion has now reached a point where Secretary of State Rex W. Tillerson, who has been reported to have privately called Trump a “moron,” was asked to weigh in during an interview with CNN on Friday. “I’ve never questioned his mental fitness,” Tillerson said. “I have no reason to question his mental fitness.”

Democrats, however, say they do. Fifty-seven House Democrats have sponsored a bill to form an oversight commission on presidential capacity. The 25th Amendment, ratified in 1967, permits a president’s powers to be transferred to the vice president when the vice president and a majority of the Cabinet or a body created by Congress conclude that the president is incapable of performing his duties. Congress has never created such a body.

Rep. Jamie Raskin, a freshman Democrat from Maryland who drafted the legislation, said it was time for Congress to do so. He said his concern was as much about cognitive issues, citing the president’s occasional slurred speech and inability to form complete sentences.

“The 25th Amendment was passed in the nuclear age, and we have to keep faith with its central premise, which is there is a difference between capacity in a president and incapacity,” Raskin said. “We haven’t been forced to look at that question seriously before and now we are.”