Trump and Macron agree that Russia should be invited to next year's G7 conference, senior admin official says 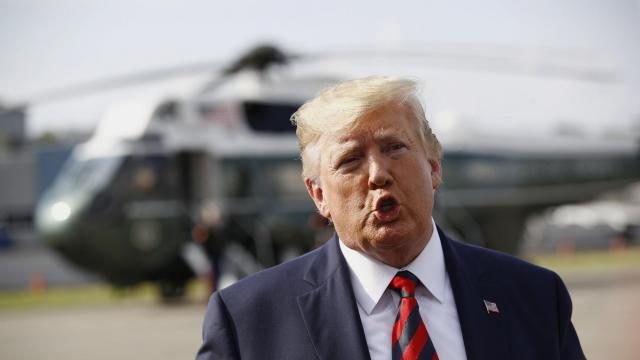 CNN — President Donald Trump on Tuesday expressed his support for reinstating Russia into the G7, and French President Emmanuel Macron has agreed with the President that Russia should be invited to the G7 conference in 2020, according to a senior administration official.

"I think it's much more appropriate to have Russia in" the group, he said during a meeting in the Oval Office with the Romanian President just days before the group of leading industrialized nations convenes for its annual summit in France.

"If somebody would make that motion, I would certainly be disposed to think about it very favorably," he added.

Later on Tuesday, a senior administration official told CNN Trump and Macron agreed in a phone conversation Tuesday that they wanted to invite Russia to the G7 next year. Trump is expected to broach the topic with other world leaders this weekend at the G7.

The call was planned to generally discuss the upcoming G7 meetings in France, which begin on Saturday. It was Macron who suggested inviting Russia to the gathering next year, and Trump agreed, the source said. The US will host the G7 in 2020.

It's unclear how the process to decide if Russia should be at the table next year will play out.

According to the source, some White House officials believe that this is a ploy by Macron to embarrass Trump into putting himself on the line publicly and pushing for Russia to be allowed back in, though the French and American leaders have discussed the topic in the past. France wants to normalize relations with Russia, the source said.

During the Macron-Putin meeting on Monday, Macron said a resolution of Russia's annexation of Crimea would be the "magic wand" to bring Russia back into the G7.

It has been reported by other outlets that Macron planned to press Putin to accept Ukraine's overtures for dialogue during that meeting in France on Monday.

CNN has reached out to the White House and the French Embassy for comment on the call.

When speaking to reporters on Tuesday, Trump claimed that his predecessor, President Barack Obama, wanted Russia out of the group because "he got outsmarted."

But the 2014 decision was made by a majority of member countries.

Russia was suspended from the group -- then known as the G8 -- after the majority of member countries united against Russia's annexation of Crimea, which Russia continues to hold.

It's also another example of Trump's failure to condemn Russia for its aggressive behavior and his ongoing push to restore more normal relations.

Trump previously said Russia should be reinstated to group as he departed for last year's summit.

"Russia should be in this meeting," Trump told reporters upon leaving the White House for the summit, which was held in Charlevoix in Canada. "They should let Russia come back in, because we should have Russia at the negotiating table."