Hillsborough, N.C. — Republicans in Orange County will resume their work Monday, meeting in a mobile office, after their headquarters was burned and vandalized Saturday night.

According to officers with the Hillsborough Police Department, the building at 347 Ja-Max Drive was vandalized overnight with graffiti and a flammable substance. Officials say the graffiti included a swastika and the words "Nazi Republicans leave town or else." The words were painted in black on the side of a business located adjacent to the headquarters and discovered by the business owner Sunday morning.

The flammable substance, which was contained in a bottle and thrown through one of the building's front windows, burned some furniture and damaged the building's interior before extinguishing itself. 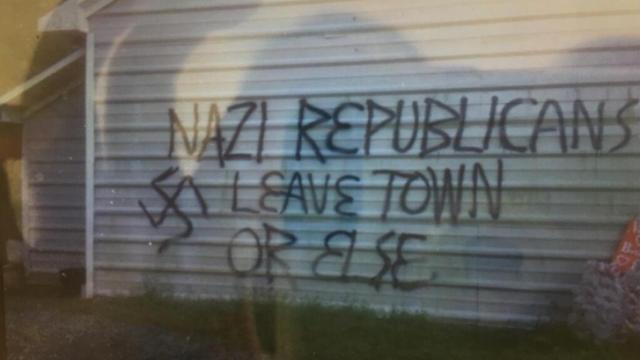 "Whether you are Republican, Democrat or Independent, all Americans should be outraged by this hate-filled and violent attack against our democracy," Woodhouse said in a statement. "Whether the bomb was meant to kill, destroy property or intimidate voters, everyone in this country should be free to express their political viewpoints without fear for their own safety. We will be requesting additional security at all Republican Party offices and events between now and Election Day to ensure the safety of our activists, volunteers, and supporters."

With the election just weeks away, Woodhouse said it would not have been unheard of to have people at the headquarters even at the late hour when the attack occurred. He said the flammable substance hit near a couch that volunteers often use to nap when they are working long hours. "It is just the Lord's intervention that somebody wasn't' here,' he said.

Daniel Ashley and other volunteers worked through their frustration Sunday with their hands covered in soot to determine what, if anything, could be salvaged.

'I'm angry as much as anything. I'm angry that the sign you see there 'freedom spoken here', somebody wanted to attack our freedom," he said.

Volunteers said that other than an occasional insult hurled in their direction, there were no threats, red flags or indication that an incident like what happened Sunday would happen.

"I know we've seen there's lots of tension on the national level. There's various forms of tension here in North Carolina, but it doesn't occur to you that it will elevate to a level like this," said political activist Matthew Arnold.

Woodhouse said the facility will be open Monday and volunteers will work from a Republican Party bus that has already pulled up in front of the parking lot Sunday night.

"It is meant to scare and intimidate people from volunteering, from working at this office and from working at other offices across the state. But we are going to do the necessary precautions to keep our people safe and keep them working,' he said.

The attack on the Orange County HQ @NCGOP office is horrific and unacceptable. Very grateful that everyone is safe.

ALL SAFE IN ORANGE COUNTY, NORTH CAROLINA. With you all the way, will never forget. Now we have to win. Proud of you all! @NCGOP

“The North Carolina Democratic Party strongly condemns this attack. Violence has no place in our political system. We hope the perpetrators of this attack are brought to swift justice, and we are thankful that no one was hurt. Our deepest sympathies are with everyone at the North Carolina Republican Party," she said.

To show their support, a group of Democrats contributed funds to repair the GOP building through A Go Fund Me page. Their goal of $10,000 was exceded within 40 minutes of the page's launch.

"The firebombing of a local political headquarters in Orange County is clearly an attack on our democracy. Violence has no place in our society, but especially in our elections. Fortunately, no one was injured; however I will use every resource as governor to assist local authorities in this investigation," he said.

"I am deeply disturbed by this news from Hillsborough. Violence and intimidation have no place in democratic elections, period. I strongly condemn these actions and have confidence that law enforcement in Orange County will work quickly to bring the perpetrators to justice," Price said.

Several local and federal agencies are involved in this investigation, and officers are standing by the headquarters for security Monday morning.

"A great deal of teamwork is coming together to work this crime that is so atypical of our community," Hillsborough Police Chief Duane Hampton said. 'in the shadow of such an ugly crime, we truly appreciate the unity of support that has been offered and want to assure our citizens that we are working to ensure the safety of our community."

“We’re so grateful that no one was hurt and that no buildings in the Daniel Boone complex were destroyed,” Hillsborough Mayor Tom Stevens said. “I have every confidence in the joint effort of our law enforcement agencies to find and prosecute the perpetrator of this reprehensible act.”