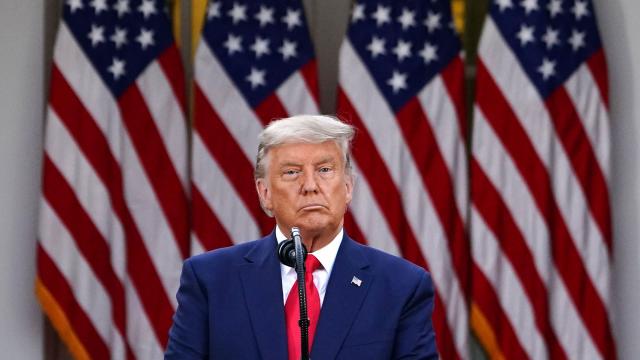 CNN — The Trump campaign filed for a limited recount of two Wisconsin counties on Wednesday in a long-shot bid to overturn President-elect Joe Biden's victory in the state.

The campaign is limiting its Wisconsin recount requests to Milwaukee County and Dane County, according to a press release from the campaign.

CNN projected that Biden will win Wisconsin. According to unofficial result, he leads President Donald Trump by 20,470 votes, or 0.62%. Trump has refused to concede and instead has promoted conspiracy theories about voter fraud.

Wisconsin election officials confirmed on Wednesday that they received a partial payment of $3 million from the Trump campaign. That money paid by the Trump campaign would be enough to pay for recounts in these counties, which are Democratic strongholds. These officials said last week that the price tag for a statewide recount would be approximately $7.9 million.

Meagan Wolfe, Wisconsin's chief election official, said in a statement that the Trump campaign's petition for a recount appeared to meet all the requirements. The state commission will meet Wednesday evening to discuss the request and would issue a formal recount order on Thursday.

"We understand the eyes of the world will be on these Wisconsin counties over the next few weeks," Wolfe said.

Milwaukee County contains Milwaukee, the state's largest city and home to the largest Black population in Wisconsin. Biden beat Trump by 317,251 votes to 134,355 in that county, according to unofficial results from the Wisconsin Election Commission.

Dane County includes the state capital of Madison, home to a many college-age voters at the University of Wisconsin. Biden won that county with 260,157 votes to 78,789 votes, according to unofficial results from the Wisconsin Election Commission.

Counties that undergo a recount will have 13 days to recount all their votes, starting on Thursday, according to procedures announced by the Wisconsin Elections Commission. The commission must certify the final results by December 1.

In both Milwaukee and Dane counties, the recounts will start on Friday and continue during weekends. Officials will take only one day off, on Thanksgiving, county elections officials said.

Scott McDonell, the Dane County clerk, said his county would start counting ballots on Friday and the recount would likely take most of the allowed 13-day period.

"We have been planning for this for several days," McDonell told reporters Wednesday. He said that it was unlikely his county's recount would lead to significant swings in votes, "certainly nothing anywhere near what would be required for a change in outcomes."

The recount will be conducted at least partly with ballot scanning machines. Poll workers will be socially distanced and the space will be set up with plexiglass and police security, McDonell said. Observers from the Trump and Biden campaigns will be able to watch proceedings and challenge ballots, and the count will also be livestreamed online.

"This was a really clean election from our point of view," he said.

Milwaukee Mayor Tom Barrett, a Democrat, blasted the Trump campaign's recount request, calling it a racially biased bid to subvert the will of voters.

"It's a very futile attempt to try to disrupt democracy in the most Democratic counties in the state of Wisconsin," he told reporters. "This is flat out an attack on democracy in cities and places where people of color live."

Hundreds of people will be involved in the count, and while social distancing procedures will be in effect, Barrett said he worried about the potential for coronavirus to spread in the indoor counting facility.

"It's not surprising at all that Donald Trump, the Trump campaign, wants to have one last mass gathering that's going to put people's health in peril," he said.

In Milwaukee, the recount will take over a sprawling floor of the city's convention center, where sheriff's deputies will guard ballots 24 hours a day.

George Christenson, the Milwaukee County clerk, said the Trump campaign's allegations about irregularities in voting had no basis in fact.

"The strategy here by the Trump campaign is to throw as much paint on the wall and see what sticks," he said. "This is just another form of voter suppression and trying to essentially attack our minority neighborhoods."

Experts have said it's extremely unlikely that the recounts will shift enough votes to overturn Biden's lead of 20,470 votes. (In 2016, a recount requested by Green Party candidate Jill Stein ended up increasing Trump's margin by just 131 votes.)