WASHINGTON (CNN) — There are two words a Trump administration official might dread hearing from their boss: "Good man."

That's because otherwise complimentary words have been offered by President Donald Trump to high-ranking officials shortly before they were ousted from his White House.

One "good man" in Trump's administration is Scott Pruitt. The President praised his embattled Environmental Protection Agency chief on Thursday but also said he would "look" at the controversies surrounding him, which have led to questions about how long he'll stay in the job. CNN reported Thursday that as recently as this week, the President floated having Pruitt replace Attorney General Jeff Sessions.

Here's a look at some other praise levied to top Trump administration members -- all of whom are no longer working in his White House.

Trump praised his now-former Veterans Affairs Secretary David Shulkin -- the latest Cabinet secretary to exit -- even as Shulkin was the subject of an inspector general's probe over his July business trip to London and Denmark, which included a stop at Wimbledon.

"You're doing a great job. We appreciate you," Trump said to Shulkin at a January 9 White House event where he signed an executive order aimed at improving mental health services for veterans.

Two months later, Shulkin says he was fired and informed via Trump tweet. The White House, however, has insisted that Shulkin resigned.

Trump's anger at Rex Tillerson after it leaked last year that his secretary of state called him a "moron" never subsided, and many in the White House saw their differences as irreconcilable.

But after announcing on Twitter that Tillerson was out and CIA Director Mike Pompeo would take over, Trump gave his "good man" goodbye to Tillerson.

"And as far as Rex Tillerson is concerned, I very much appreciate his commitment and his service, and I wish him well. He's a good man," Trump said outside the White House on March 13, adding, "Rex will be much happier now." 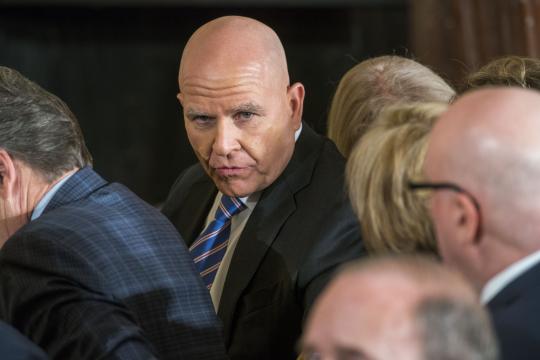 The President last summer stood by his national security adviser H.R. McMaster, who was under fire at the time from far right-wing media outlets and Trump's base for personnel moves he made at the White House.

"General McMaster and I are working very well together. He is a good man and very pro-Israel. I am grateful for the work he continues to do serving our country," Trump said in a statement in August released from the White House.

McMaster resigned last month, just over a year into the job.

Former Health and Human Services Secretary Tom Price said farewell at the end of September amid a scandal over his use of private planes.

Hours before it would be known that Price resigned, Trump lamented, "I felt very badly because Secretary Price is a good man."

"I think it's a shame because as a human being, Tom Price is very good man," Trump said before departing the White House for his golf club in Bedminster, New Jersey.

Last August, Steve Bannon's days in the White House as chief strategist seemed numbered as Trump brought on a new chief of staff John Kelly and as the White House was dealing with the fallout over Trump's response to a white supremacist rally in Charlottesville, Virginia.

"I like him. He's a good man," Trump told reporters during an August 15 impromptu news conference at Trump Tower, three days before he would fire Bannon.

Last February, Trump asked for and received then-national security adviser Michael Flynn's resignation, after it became public that Flynn had misled Vice President Mike Pence on conversations he had during the transition regarding sanctions on Russia with Russia's ambassador to the US.

"Gen. Flynn is a wonderful man. I think he has been treated very, very unfairly by the media, as I call it, the fake media in many cases. And I think it is really a sad thing that he was treated so badly," Trump said two days after Flynn's departure.

Flynn pleaded guilty in December to lying to the FBI about his conversations with Russia's ambassador.

Trump announced on Twitter in late July that he was replacing his chief of staff Reince Priebus with Kelly.

Priebus, who had accompanied Trump to Long Island for an event on gang violence, was seated inside a Secret Service van on the tarmac at Joint Base Andrews outside Washington when the news broke. His vehicle drove away in the rain before Trump himself got off the plane.

"Reince is a good man. John Kelly will do a fantastic job. General Kelly has been a star, done an incredible job thus far, respected by everybody. A great, great American. Reince Priebus, a good man," Trump said after stepping off the plane.