Trump Blasts Comey in Barrage of Tweets, Calling Him ‘Slippery’ 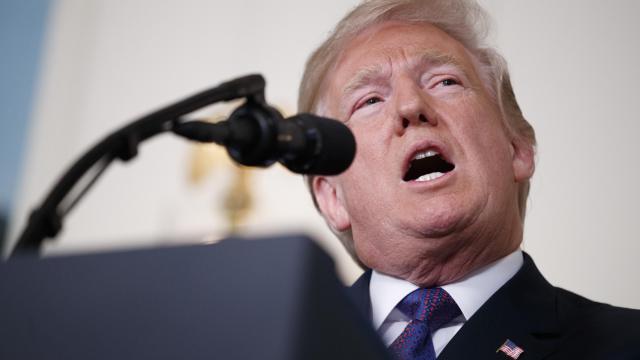 For the second time in a week, President Donald Trump on Sunday excoriated former FBI Director James Comey in a series of tweets after details from Comey’s tell-all book were leaked before its official release.

In the latest tirade, which unfolded over an hour, the president declared that Comey “will go down as the WORST FBI Director in history, by far!” He mentioned Comey’s contemporaneous notes of their meetings, calling those memos self-serving and “fake.”

“I never asked Comey for Personal Loyalty,” Trump wrote. “I hardly even knew this guy. Just another of his many lies. His ‘memos’ are self serving and FAKE!”

Trump continued: “Slippery James Comey, a man who always ends up badly and out of whack (he is not smart!), will go down as the WORST FBI Director in history, by far!”

He again called Comey a “slimeball,” an insult he lobbed Friday. He also questioned Comey’s intelligence twice — first by saying the investigation into Hillary Clinton’s emails had been handled “stupidly” and then, about 30 minutes later, that Comey “is not smart!”

“Unbelievably, James Comey states that Polls, where Crooked Hillary was leading, were a factor in the handling (stupidly) of the Clinton Email probe,” Trump wrote. “In other words, he was making decisions based on the fact that he thought she was going to win, and he wanted a job. Slimeball!”

Hours later, Comey appeared to make an indirect response to the jabs. In a post on Twitter, he said his book, “A Higher Loyalty,” was about “ethical leadership” and drew not only from his own life but also from “lessons I learned from others.”

Of the three presidents mentioned in the book, two help illustrate “the values at the heart of ethical leadership,” Comey said, and one “serves as a counterpoint.”

In his tirade, Trump questioned the integrity of former U.S. Attorney General Loretta Lynch, who said in a recent interview with NBC News that she did not discuss Hillary Clinton during her meeting with President Bill Clinton in June 2016 on a plane on an airport tarmac. Hillary Clinton’s exclusive use of a private email server has long been the subject of controversy and that meeting with Bill Clinton cast a shadow over the federal investigation.

Lynch told NBC that Bill Clinton told a “charming story” about grandchildren and discussed issues of the day, such as Brexit.

Trump balked at that description, writing on Twitter, “Was she promised a Supreme Court seat, or AG, in order to lay off Hillary. No golf and grandkids talk (give us all a break)!”

The president’s sharp remarks came hours before Comey’s first major news media appearance since being fired by Trump last year. Excerpts from the interview, which will air on ABC News on Sunday night, have been shared by the network after details from Comey’s book leaked Thursday.

Comey’s book describes Trump as “unethical, and untethered to truth” and compared Trump to a Mafia boss.

The book also speculates about Trump’s refusal to acknowledge Russia’s attempt to influence the election.

“Maybe it was a contrarian streak,” Comey wrote, “or maybe it was something more complicated that explained his constant equivocation and apologies for Vladimir Putin.”

On Friday, Trump and his allies counterattacked after the book excerpts leaked, and Democrats, many of whom blame Comey for Hillary Clinton’s loss in the 2016 election, issued a muted defense.

Trump continued his criticism of Comey’s book Sunday, questioning why Comey hadn’t used the book to address questions such as why “he gave up Classified Information.”

Amid his tweets about Comey, Trump also addressed the latest military strike in Syria, defending his use of the phrase “mission accomplished” and saying the raid was “perfectly carried out.”

“The Syrian raid was so perfectly carried out, with such precision, that the only way the Fake News Media could demean was by my use of the term ‘Mission Accomplished,'” Trump wrote. “I knew they would seize on this but felt it is such a great Military term, it should be brought back. Use often!”