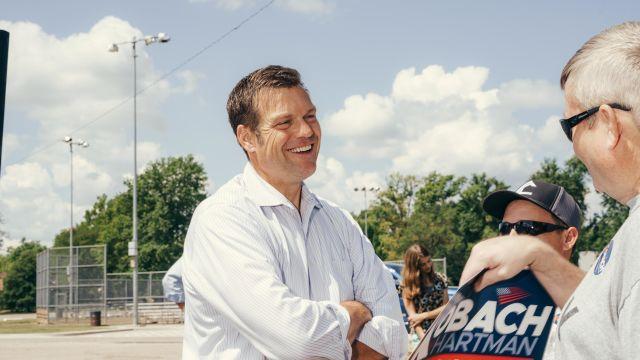 President Donald Trump turned aside the advice of party officials and intervened in the Kansas Republican primary for governor Monday, throwing his support behind the polarizing secretary of state, Kris Kobach, one day before voters go to the polls there.

In a tweet that Republican governors and some of his own aides had sought to avert, Trump called Kobach “a fantastic guy” and offered his “full & total endorsement.”

“Kris Kobach, a strong and early supporter of mine, is running for Governor of the Great State of Kansas,” Trump wrote. “He is a fantastic guy who loves his State and our Country - he will be a GREAT Governor and has my full & total Endorsement! Strong on Crime, Border & Military. VOTE TUESDAY!”

Kobach is running against Gov. Jeff Colyer, who succeeded Sam Brownback, and a handful of other Republicans in a contest that had been highly competitive. But Trump’s blessing is now likely to lift Kobach, who is best known for his hard-line views on immigration and voting rights.

The Republican Governors Association and a number of high-level party operatives counseled Trump against siding with Kobach, because polls show he is unpopular with the general electorate in Kansas and would provide Democrats an opening to take back the governorship. But Trump has grown fond of his king-making abilities after weeks of successfully intervening for candidates who went on to win Republican nominating contests from South Carolina to Georgia to Alabama.

Further, Kobach was an early and loyal supporter of Trump, endorsing him shortly before Kansas’ presidential nominating caucus, and has developed a rapport with the president’s eldest son, Donald Trump Jr. And he served earlier this year as a member of the administration’s short-lived voter integrity commission.

Trump telephoned some of his political advisers Monday morning to raise the possibility of getting behind Kobach, according to a Republican official familiar with the call. They relayed to him that if the party nominated a firebrand like Kobach for governor, it could have a ripple effect in the House, energizing Democrats in a pair of competitive Kansas congressional races. But Trump indicated he felt an abiding loyalty to Kobach and wanted to help an ally, the official said.

West Wing aides had hoped to keep the Kansas race away from Trump’s line of sight, but were uneasy about what he may do during an extended, and unsupervised, trip to his New Jersey golf resort. And that is where the president unfurled his endorsement, blindsiding the governors association and Colyer, who just a few days ago praised the president in an interview, and made the case for why he should not side with Kobach.

Kobach said in a telephone interview that he had spoken to Trump on Saturday but that he did not know the endorsement would be coming until he got a call from the president’s aides Monday morning. “He makes a big splash at a critical time,” Kobach said with evident delight, noting that he would be adding the endorsement to last-minute digital advertising and including it in scripts for get-out-the-vote calls.

“I think the biggest impact of President Trump’s endorsement is that it will help undecided voters make up their minds,” he added.

Last week, in an interview from his office in Topeka, the Kansas capital, Kobach said that he spoken with Trump on the phone the previous day and that the president was aware of his polling strength in the primary. But he did not reveal much more, smiling when asked if he thought Trump would weigh in.

Kansas Republicans were already facing headwinds in this year’s election because of how much Trump has energized liberals and moderates, as well as lingering unhappiness with Brownback, who left the governor’s office for a Trump administration post with dismal approval ratings.

Democrats were elated, and pointed also to Trump’s intercession in the Florida race for governor, where the president has backed Rep. Ron DeSantis, a frequent Fox News surrogate, over the establishment favorite and state agricultural commissioner, Adam Putnam.

“Just like in Florida and Georgia, Donald Trump is bringing chaos to Republican primaries,” said Jared Leopold, a spokesman for the Democratic Governors Association. “It’s extraordinary to see a Republican president endorse against a sitting Republican governor and the RGA.”

Colyer’s campaign did its best to downplay the last-minute intervention, pointing out Kobach’s friendship with the president’s son while holding up the candidate’s own support from one of Kansas’ favorite Republican sons.

“We respect the Trump family’s loyalty, but as Bob Dole made clear in his endorsement of the governor — Dr. Colyer is the best candidate to win tomorrow and is the only candidate who can defeat the Democrats in the fall,” said Kendall Marr, a spokesman for the governor. (Colyer is also a plastic surgeon.)