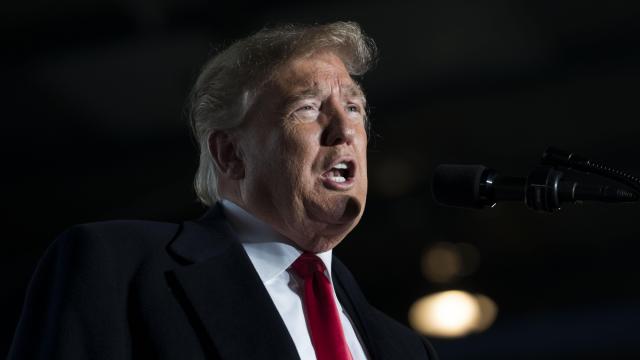 WASHINGTON — President Donald Trump attacked the Republican speaker of the House on Wednesday for criticizing his position on birthright citizenship and said he should focus instead on safeguarding the party’s majority in Congress, a remarkable display of intraparty fighting six days before midterm elections in which the Republican majority is at risk.

“Paul Ryan should be focusing on holding the Majority rather than giving his opinions on Birthright Citizenship, something he knows nothing about!” Trump said in a Twitter post.

Trump’s broadside came a day after Ryan, the speaker from Wisconsin, dismissed the president’s plan, floated on Tuesday, to take executive action to nullify the constitutional guarantee that anyone born in the United States is a citizen, which he said was “obviously” impossible.

It suggested that the president, even as he begins a nationwide sprint of rallies meant to salvage Republican control of the Senate, was already preparing to cast blame elsewhere for the possible loss of the House. And it was the starkest example yet of how Trump, who has insisted that the coming elections are about him, has put Republican candidates in the position of having to answer for statements, actions and issues many would rather not touch.

The dynamic was on display Tuesday in Pittsburgh, when the president, determined to rush to the site of Saturday’s synagogue massacre despite the pleas of local leaders to wait, was shunned by Republican and Democratic congressional leaders as well as local elected officials, all of whom declined invitations to appear with him. Trump was greeted by a lone Republican member of Congress, Rep. Keith Rothfus of Pennsylvania, who opted to meet him privately during a stop at a hospital rather than in front of reporters and news cameras at the Tree of Life synagogue. For his willingness to meet with Trump on a day when no other public official would, Rothfus received a favorable tweet from the president on Wednesday, the mirror image of the slap that Ryan got for crossing him.

Trump said he had been “really impressed” with Rothfus “far more so than any other local political figure,” citing the congressman’s “sincere level of compassion, grief and sorrow,” and exhorting his followers to “Vote for Keith!”

Even before the visit, though, Trump seemed bent on injecting his own brand of divisive, seat-of-the-pants politics into the final days of the midterm contests. His decision to pitch a legally dubious plan to circumvent the 14th Amendment and declare the children of unauthorized immigrants ineligible for birthright citizenship forced Republicans, many fighting for their political lives, to wade into an arcane, emotionally charged debate over the Constitution and immigration only days before voters go to the polls.

“Suggesting in the closing days of a campaign that you can do this by executive order — if you think that this is helping in Florida and California districts, it’s not helping,” said Rep. Ryan Costello, R-Pa., who, like Ryan, is retiring, and who called Trump’s out-of-the-blue proposal “political malpractice.”

“If we are going to be talking about an I-word right now, it should be infrastructure, not immigration,” Costello said in an interview.

But Trump has been unwilling to stick to any such script in favor of a seemingly endless stream of insults of his adversaries, divisive language, and outlandish policy proposals and statements designed to appeal to his core supporters.

The attack on Ryan was only the beginning Wednesday. Talking to reporters as he left for a rally in Florida, Trump doubled down on his position — disputed by a wide range of legal scholars — that he could unilaterally end birthright citizenship. At the same time, he undermined a central argument he and many other conservatives have made that President Barack Obama’s executive action to give work permits and deportation reprieves to some young immigrants brought to the United States illegally as children, known as DACA, was illegal.

“If he can do DACA, we can do this by executive order,” Trump said.

The president kept up his anti-immigrant messaging, repeatedly using the word “dangerous” to describe Central American migrants heading north through Mexico, and vowed to send as many as 15,000 troops — 10,000 more than the administration announced just a day before — to seal the border against them. Trump also vastly overstated the number of unauthorized immigrants in the United States, putting the number as high as 30 million, almost three times the commonly accepted estimate of 11 million.

“No, not fear-mongering at all,” Trump shot back when asked about his attempts in recent days to stoke alarm about an immigrant onslaught. “Immigration is a very important subject.”

At the same time, with Republicans privately grim about their chances of holding the House, Trump was bullish about the party’s chances, and argued that Republicans were doing particularly well with women, who polls show are particularly hostile to him and the party overall.

“Women, we’re doing very well with the women vote, because they want security,” Trump said. “They want safety. They don’t want these people pouring into our country, totally unchecked.” The president later said he would not blame Ryan if the party lost control of the House next week, but he was quick to declare himself a net positive for Republicans, who he argued had gotten a boost from his campaign stops.

“No, I’m not going to blame anybody,” Trump said when asked about Ryan. “I think we’re doing well with the House. We’re going to have to see. It’s a lot of people. I’ve campaigned for a lot of candidates that were down a little bit, and now they’re up.”

Yet the president’s antics have also introduced an unwelcome element of unpredictability for Republican candidates in the final days of competitive races. Several Republicans running in suburban districts, more politically moderate districts or those with large concentrations of Latino voters quickly disavowed the idea of ending birthright citizenship, relishing a chance to highlight a topic of disagreement with a president who is not popular with the voters whose support they need to win.

“I can see a strategy on the president’s part of hitting the immigration and border security issues hard, even if the facts don’t support his positions, in order to excite his base,” said Michael Steel, a Republican strategist who is a former senior aide to Ryan. But, he added, “picking a fight with any political figure in the party with less than a week to go before the midterms is just stupendously counterproductive, and implies either a lack of discipline and thin-skinnedness, or that the president is bracing for the blame game in case of a bad result.”

Many Republicans, Steel said, have internalized the fact that while they may disagree with the president’s words and actions in many cases, their political fates are intertwined with his.

“There are things that he says and does that many, if not most, in the party are not comfortable with, but at the same time, he’s the president, and this election is going to be in many, many ways about him,” he said.

By Wednesday evening, Trump had fired off more tweets, one questioning the sanity of Harry Reid, the former Senate majority leader who has pancreatic cancer, and another linking to an expletive-filled video depicting immigrants who had committed violent crimes and a group of brown-skinned men breaching a barrier.

“Who else would Democrats let in?” the video asks ominously.