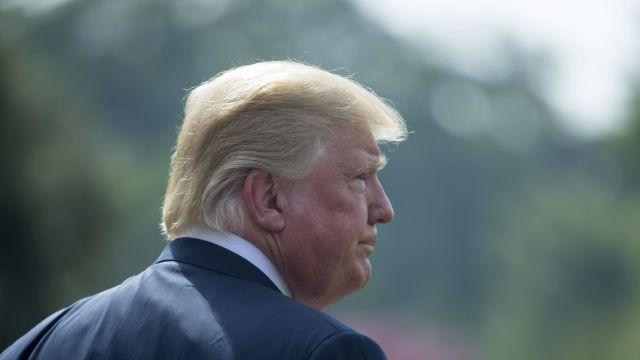 WASHINGTON — President Donald Trump and Rudy Giuliani, his personal lawyer, both taunted former CIA Director John Brennan on Monday, apparently hoping that they could goad Brennan into filing a lawsuit against the president for revoking his security clearance.

Giuliani tweeted that if Brennan failed to follow through with a lawsuit, it would be like former President Barack Obama’s last-minute decision not to launch an attack on Syria after saying that the government’s use of chemical weapons was a “red line” it must not cross.

Earlier in the day, Trump had tweeted that he hoped Brennan would sue him, calling Brennan the “worst CIA Director in our country’s history” and saying that a lawsuit would reveal “all of his records, texts, emails and documents to show not only the poor job he did, but how he was involved with the Mueller Rigged Witch Hunt.”

Together, the two tweets amounted to an odd “bring it on” challenge to Brennan, who had mused over the weekend about filing a lawsuit as a response to losing his security clearance. Trump said last week that he revoked Brennan’s clearance because of his role in the investigation into Russian interference in the 2016 presidential election.

It is not entirely apparent why Trump and his lawyers would want to wage another legal battle at the moment. The president is already at the center of the Russia investigation by Robert Mueller, the special counsel. Michael Cohen, his longtime personal lawyer, is under investigation in New York. And the first of two criminal trials of Paul Manafort, the president’s onetime campaign manager, is likely to wrap up this week.

In a telephone interview Monday afternoon, Giuliani said a lawsuit by Brennan would open the door to a detailed examination of Brennan’s life, focused on the question of whether the former CIA director was using his security clearance for personal profit. “He actually only needs it in case the government would call upon him for advice,” Giuliani said of Brennan, who he said was no Henry Kissinger. “The idea that this government would call upon him for advice is not existent.”

He said a deposition of Brennan, conducted by himself and Jay Sekulow, another of Trump’s lawyers, could go on for hours — “maybe longer than McGahn’s testimony,” Giuliani said, a reference to the 30 hours that Don McGahn, the White House counsel, has talked to the special counsel in the Russia investigation.

Asked whether his taunting tweet directed at Brennan was a joke, Giuliani said: “Of course it is. I don’t take the threat of the lawsuit seriously, so my statements aren’t serious.”

But he said he had talked with Trump about Brennan on Monday morning and concluded that the president “would like him to sue.”

A lawsuit by Brennan to challenge the revocation of his security clearance would most likely be filed against the government, and would be defended against by Justice Department lawyers. It is possible that a defamation lawsuit by Brennan could be filed directly against Trump, which would require his personal lawyers to defend him.

In an interview Sunday on NBC’s “Meet the Press,” Brennan said that he had been contacted by “a number of lawyers” who had suggested filing a lawsuit as a way of preventing the president from taking other people’s security clearances away.

“If my clearances and my reputation, as I’m being pulled through the mud now, if that’s the price we’re going to pay to prevent Donald Trump from doing this against other people, to me, it’s a small price to pay,” he said. “So I am going to do whatever I can personally to try to prevent these abuses in the future. And if it means going to court, I will, I will do that.”

The comments about Brennan were part of a long string of presidential tweets as the workweek began. Earlier Monday, Trump asked on Twitter whether a career Justice Department lawyer would ever be fired and suggested that he did not expect his own attorney general to make the personnel decision.

It was a one-two punch of sorts, again putting the longtime civil servant, Bruce Ohr, on notice that his job may be on the line because of perceived ties to the Russia investigation, and also insulting Attorney General Jeff Sessions, who has been a favorite target of the president’s criticism for not putting an end to the inquiry.

Trump has had Ohr, a law enforcement official who has worked on anti-drug and anti-gang initiatives, in his sights for some time. Just this past week, the White House included him on a list of people the president was considering stripping of their security clearances. The president has also referred to Ohr as a “disgrace,” and incorrectly said he had had a role in starting the Russia investigation.

The president spent part of his morning Monday tweeting about his outrage over the Russia investigation, calling Mueller “disgraced and discredited,” and calling Mueller’s team “Angry Democrat Thugs.”

Trump has fired or rejoiced in the firing of other longtime government employees he has placed in a catalog of people he considers to have conspired against him in his pursuit of the White House. Several of these federal workers have been the subject of the president’s Twitter tirades.

It appears Ohr’s ties to this world are through a professional acquaintance and through his wife, Nellie Ohr. Nellie Ohr worked as a contractor for the private research firm Fusion GPS, which produced a dossier during the campaign that is purported to link Trump and some of his associates to Russia. Trump considers the dossier to be a work of fiction, paid for by Democrats, and he thinks the document is part of what prompted the government’s counterintelligence investigation into Russia and Trump’s presidential campaign.

Bruce Ohr’s lawyer did not respond to a request for comment.

But firing Ohr, who now works in the Justice Department’s criminal division, is most likely not something that can be done overnight because of the job protections he has as a civil servant, said Mark Zaid, a longtime Washington lawyer who represents federal employees who work in national security.

“There’s still an administrative due process procedure that has to be afforded to any federal employee like Ohr to be terminated,” Zaid said. “Bureaucracy takes a while.” Conservatives have highlighted Bruce Ohr’s ties to the Russia investigation, pointing to emails in 2016 that show Ohr was in contact with Christopher Steele, the former British spy who compiled the dossier based on Russian sources. Some Republican lawmakers argued that a memo with these details should be declassified to show that Steele’s bias should have been considered when the FBI started its investigation.

Ohr later told the FBI about his wife’s work with Fusion GPS and about his own conversations with Steele. Ohr passed along information Steele had provided to him but, by then, the FBI had already received the information directly from Steele.

Trump has tweeted about Ohr nine times since the beginning of August.