Trump Announces That the Moon Is Astronauts’ Next Destination 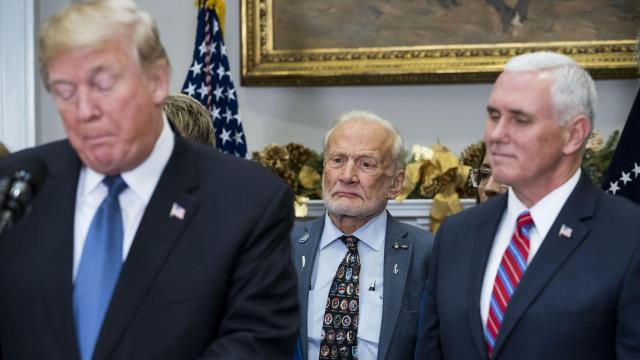 President Donald Trump announced on Monday that the moon would be the next destination for American astronauts, putting the Oval Office’s imprimatur on what other administration officials have said for months.

“It marks a first step in returning American astronauts to the moon for the first time since 1972, for long-term exploration and use,” Trump said during a brief ceremony at the White House, where he signed what the White House called Space Policy Directive 1.

“This time, we will not only plant our flag and leave our footprints,” Trump said. “We will establish a foundation for an eventual mission to Mars, and perhaps someday, to many worlds beyond.”

Attendees included Harrison Schmitt, one of the astronauts on Apollo 17, the last piloted mission to the moon.

“Today we pledge he will not be the last,” Trump said.

The directive, which came on the 45th anniversary of Apollo 17’s landing on the moon, calls for collaboration with commercial companies and other nations, but it did not specify when the moon mission would occur or how much it might cost.

These details may emerge in February when the administration’s proposal for fiscal year 2019 is released.

Vice President Mike Pence made a similar announcement in October at the first meeting of the National Space Council, which is to coordinate space policy across various federal agencies.

Trump’s announcement essentially revives goals that President George W. Bush announced in 2004. The resulting NASA program, Constellation, was to put astronauts on the moon by 2020 but was hobbled by delays and cost overruns.

President Barack Obama canceled it in 2010 and instead told NASA to focus on reaching an asteroid in the 2020s and then Mars in the 2030s.

The new heavy-lift rocket that NASA is developing for deep-space missions — known as the Space Launch System — could serve as a core component of a moon trip. But the first uncrewed test of that rocket will not occur until 2019 or 2020, and the first flight carrying astronauts would follow several years later.

“For all of this goal-setting, the real test of the Trump administration’s space plan is simple,” Larson said. “Is it a giveaway to special interests, or an actual space strategy that will push us ahead? We don’t know the answer to that yet.”