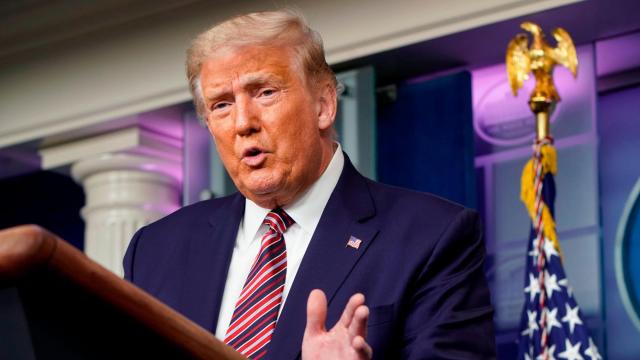 The White House originally billed the deal to obtain tests, which are made by Abbott Laboratories, as a potential game-changer to battle the coronavirus pandemic. But without detailed federal guidance on how to distribute the tests, states and cities remained divided, and some of them stifled, on how to best to use those types of rapid tests and others for the testing technique known as "screening" -- which involves routinely testing people whether or not they have symptoms.

Announcing the distribution plan Monday afternoon in the White House Rose Garden, Trump claimed the testing effort would "allow every state on a very regular basis test every teacher who needs it."

"I'm pleased to report we're announcing our plan to distribute 150 million Abbott point of care tests in the coming weeks," Trump said in the Rose Garden on Monday.

Of course, many schools across the country have already been opened for weeks without comprehensive testing access amid the Trump administration's ongoing push to reopen schools and businesses despite the ongoing pandemic.

And the plan marks a pivot by the Trump administration and by the President, who has repeatedly and inaccurately claimed that more coronavirus testing in the US would lead to more coronavirus cases.

At one point earlier in the pandemic, Trump said he'd told his staff to slow down coronavirus testing, but leading federal health officials have asserted that they have not been asked to do so.

Trump appeared to take a different approach to testing in the Rose Garden on Monday, saying that an increase in coronavirus testing efforts and, therefore, an increase in anticipated asymptomatic coronavirus cases among those in low-risk populations "should not cause undue alarm."

"As we massively increase testing capacity, we will identify more cases in asymptomatic individuals in low-risk populations. This should not cause undue alarm," Trump said. "The total number of cases is not the full metric of success. Hospitalization capacity and mortality rates are far more instructive metrics. As we do more tests, you're going to have, automatically, more cases."

About 100 million tests, the President said, "will be given to states and territories to support efforts to reopen their economies and schools immediately and (as) fast as they can."

Adm. Brett Giroir, the Trump administration's coronavirus testing czar, said that the federal distribution plan will grant governors flexibility on how they deploy the tests, but offered some prioritization guidance, which included implementing coronavirus screening.

"Governors have the flexibility to use these tests as they deem fit, but we strongly encourage governors to utilize them in settings that are uniquely in need of rapid low-tech point of care tests, like opening and keeping open our K-12 schools, supporting critical infrastructure and first responders, responding to outbreaks specifically in certain demographics or locations, and screening or surveillance in congregate settings," Giroir said.

Speaking with CNN's Erin Burnett on "OutFront" later Monday, Giroir touted the distribution of the tests as "a real step forward in our testing."

He added: "So now that the production is up, we're able to start distributing to the states. This week, 6.5 million to governors to use as they deem fit. Hopefully for schools and other critical infrastructure."

The US Centers for Disease Control and Prevention said in coronavirus guidance in August that some people without symptoms may not need to be tested, even if they've been in close contact with someone known to have the virus. The guidance was rolled back earlier this month to once again stress that anyone who has been in contact with an infected person should be tested for coronavirus.