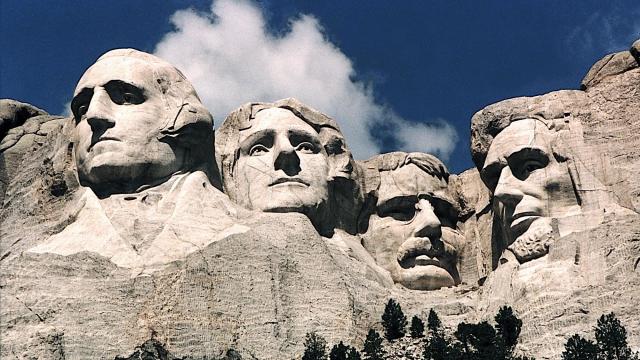 CNN — President Donald Trump said Wednesday this year's Independence Day will feature a fireworks display atop Mount Rushmore, an event he would "try" to attend.

In May 2019, South Dakota Republican Gov. Kristi Noem initially announced that fireworks would be returning to Mt. Rushmore beginning with the 2020 Independence Day celebration. The fireworks had been discontinued in 2009 due to concerns about a pine beetle infestation.

Brushing aside what he said were dubious environmental concerns that had previously prevented fireworks at the South Dakota landmark, Trump said he'd secured this year's show easily.

"What can burn? It's stone. Nobody knew why," Trump said of the concerns over the environment.

A recent US Geological Survey report cited past fireworks displays at the monument as the probable cause for elevated concentrations of contaminants in groundwater near the monument.

"I called up our people and in 15 minutes got it approved and we will have the first fireworks display at Mount Rushmore, and I will try and get out there if I can," Trump said on Wednesday.

The President has worked to host several large events highlighting American patriotism on US holidays like the 4th of July and Veterans Day.

In 2018, Trump unsuccessfully pursued holding a military parade on Veterans Day in Washington in honor of the 100th anniversary of the armistice that ended the First World War. The Defense Department postponed the parade, which was supposed to involve US troops in period uniforms as well as US military aircraft but no heavy vehicles like tanks in order to prevent damage to infrastructure.

And last 4th of July, the President threw an Independence Day celebration in Washington, complete with military flyovers, fireworks and military tanks on display.